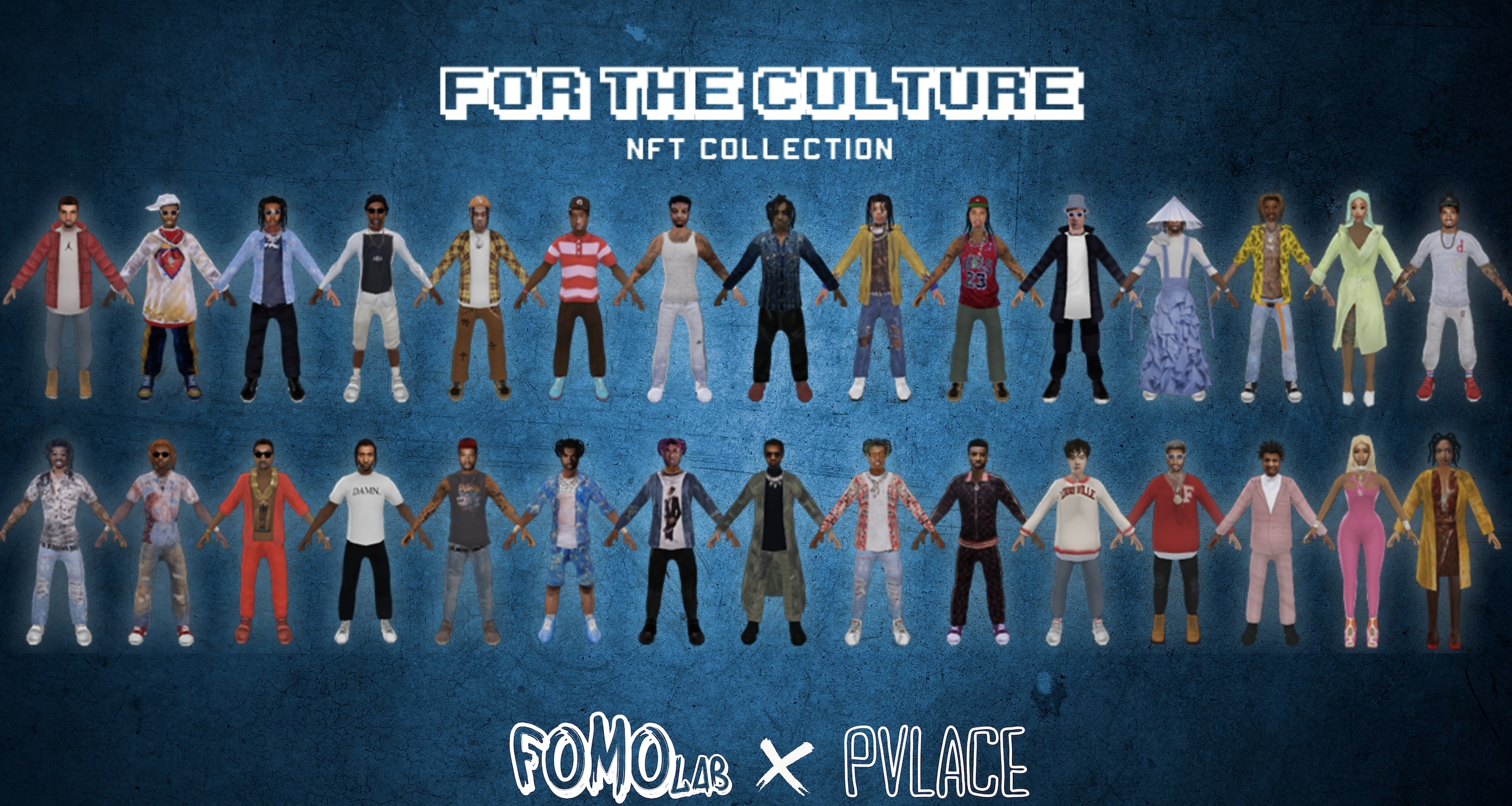 London, United Kingdom, 17th May 2021 – Fomo Lab partners with PVLACE of 808 MAFIA and GUNBOI to drop their “FOR THE CULTURE” collection on Fomo Lab’s own NFT platform, The Avenue. This collection will contain 387 intrinsically rare collectibles of music in the form of “mystery boxes”, by PVLACE and GUNBOI, multi-platinum, Billboard chart-topping, industry-leading producers who have made music for some of the biggest names in hip-hop history, including; Wiz Khalifa, Migos, Future, and many more. The “For The Culture” collection will be launched on The Avenue from the 31st of May.

The landscape of entertainment media is evolving, and the PVLACE’s NFT team are the first to ever integrate hip-hop culture with crypto culture in a gamified fashion by including 3D avatar characters each paired to 1 of 1 production composed by top industry producers. They have produced music for the biggest names in the music industry, including Young Thug, whose most recent album, Slime Language 2, debuted at number one on the “Billboard Albums Hot 100”, and are now working closely with Fomo Lab to release their collection making it accessible to more audiences.

The “For The Culture” collection is set to include 387 unique NFT’s varying from exclusive items to exclusive avatars, all of which will include exclusive music and instrumental compositions. The essence of this collection is that the producers are selling the full rights to the music through NFTs, as the most seamless way to transfer rights. The music on each NFT will range between two to five minutes long, along with one-of-a-kind avatars of celebrities, and of items.

Tchakalla Romeo (aka Gunboi), the music producer, said “Every collectible is an homage to how we felt when we were younger and Fomo Lab understands and believes in that, too.. This culture is meant to be a comprehensive examination of hip-hop in all forms.”

The CEO and co-founder of Fomo Lab, Pixasso stated, “We are very excited for this collection to launch, as it also really resonates with all of us at Fomo Lab being hip-hop fans ourselves. The fans will love it too, it is also a seamless way to change ownership to be more in line with the content creators vision. We have a lot of really cool NFTs coming to The Avenue, but we’re thrilled this is our first one.”

Each NFT will be sold at an even price of 2 BNB (no more than $1,400 USD), where in the traditional music industry market it would sell for over $20,000 USD. This is because they believe that hip-hop was always “for the people”, in line with their vision, their goal is to make these memorabilia accessible to everyone, while expanding the ecosystem. The music in each NFT is made by the same creators who produced music for top major label artists such as Future, Migos, Chris Brown, Young Thug, Lil Baby, Juice WRLD, and Wiz Khalifa, among many others, ensuring the worth of these NFTs to be extremely valuable.

Fomo Lab is the leading platform revolutionizing the way non-fungible tokens (NFTs) are used. The platform can be used for storing, curating, and exchanging one-of-a-kind digital collectibles and NFTs built on the Binance Smart Chain (BSC). The native token, $FOMO, will be used as the platform’s payment method, also used to reward buyers and sellers on all transactions. The platform is centred around the theme of celebrities, artists, musicians, athletes, other forms of talent, auctioning physical and digital assets with a mission to pioneer mainstream adoption. For more information about Fomo Lab, visit https://fomolab.io/.