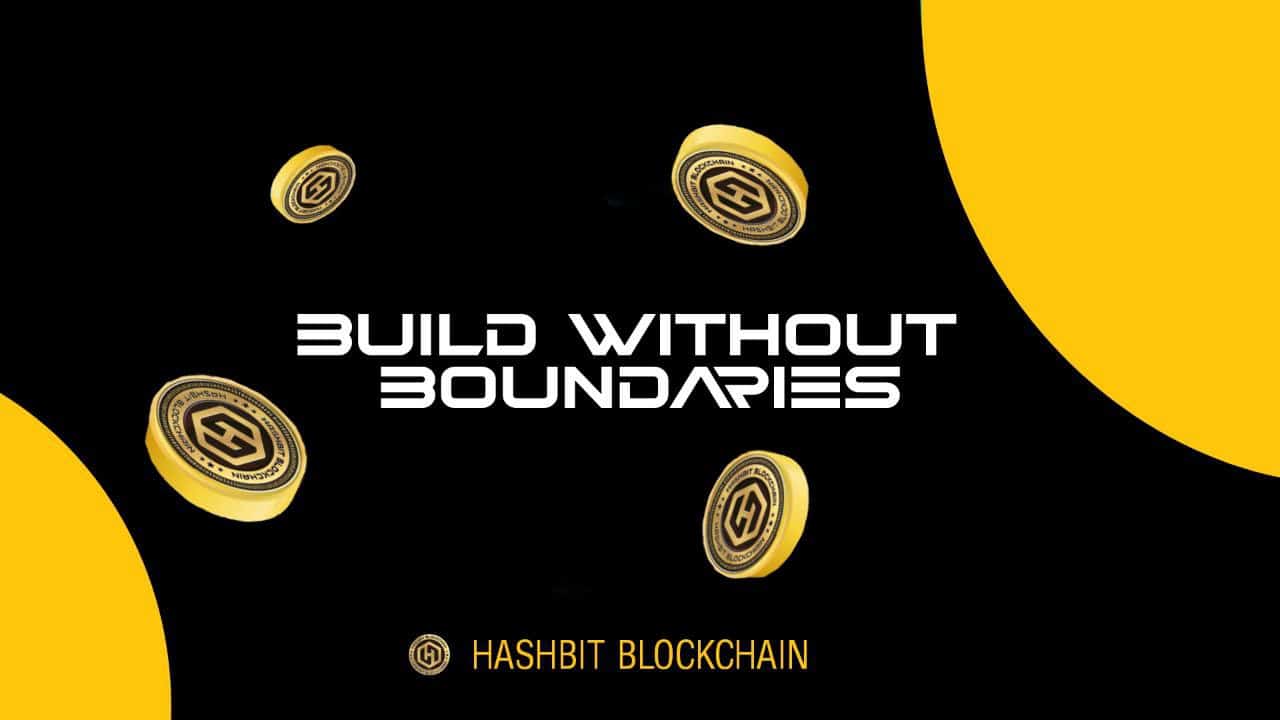 HBIT is a blockchain that is a 100% proof-of-stake cryptocurrency built in open-source Java. HBIT already has a unique proof-of-stake algorithm that is resistant to so-called nothing-at-stake attacks and does not rely on any implementation of the coin age notion used by other proof-of-stake cryptocurrencies. The genesis block distributed a total of 50 billion usable coins. Along with the more regularly used SHA256 hashing algorithms, Curve25519 cryptography is employed to create a balance of security and required processing power.

Accounts that are unlocked on network nodes generate blocks every 30 seconds on average. Because the entire coin supply has already been dispersed, HBIT is redistributed by including transaction fees, which are granted to an account when it successfully creates a block. This is known as forging, and it is similar to the mining approach used by other cryptocurrencies. After 10 block confirmations, transactions are considered safe, and HBIT’s present architecture and block size cap allow for the processing of up to 1,101,600 transactions per day.

HBIT launched the BEP20 token on Binance Smart Chain on October 26, 2022, with a public auction. The remaining HBIT sum was allocated to the investors who participated. So, what are the major aspects of our HBC20 chain and why was it required? 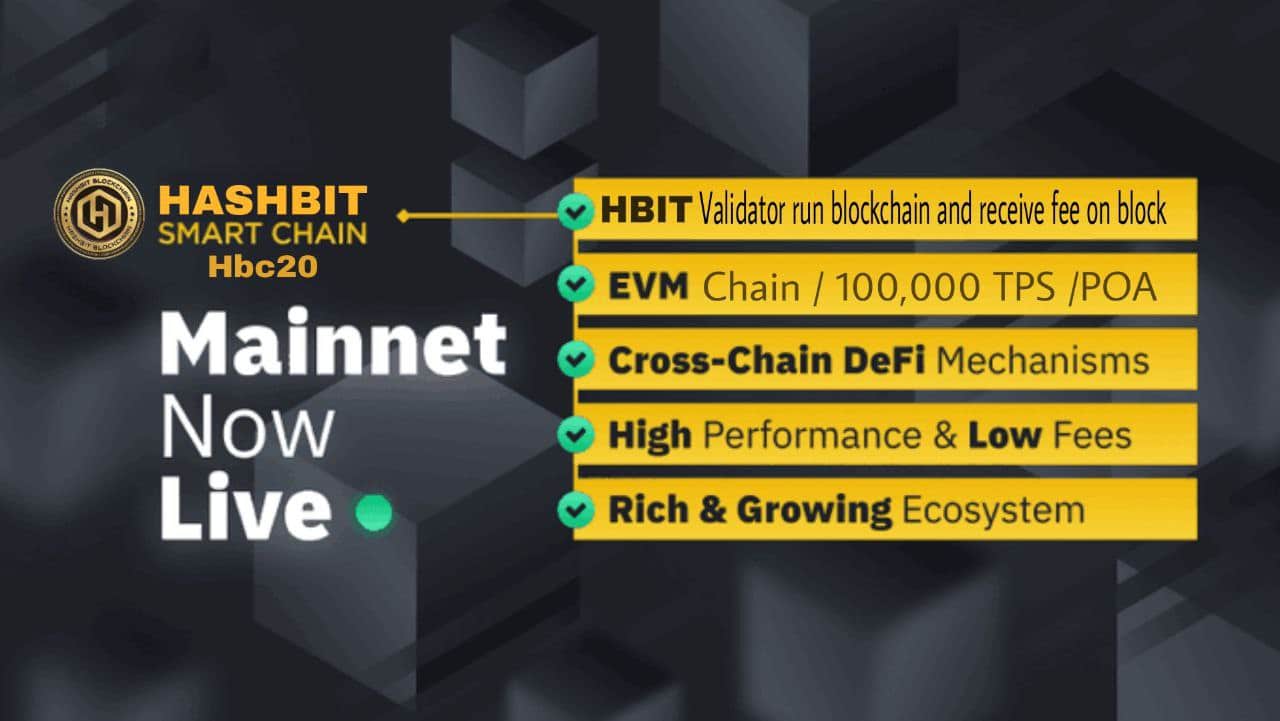 HBIT. HBC20 Blockchain is HBIT’s most recent release, a POA (proof of authority) Blockchain that enables Smart Contracts. Because it is a compatible EVM Blockchain, all Dapps on Ethereum and other EVM Blockchains may be easily transferred to HBIT. HBC20 According to the POA, the Blockchain and its blocks are administered by Approved Validators via a voting system of the other Validators. Once a validator is approved, he begins to confirm and produce blocks in the Blockchain and then makes it work together with the other validators. But this is a very brief introduction to what HBC20 Chain is capable of so let’s get into the details.

Smart contracts are lines of code that run automatically when a certain condition is satisfied. They are known as decentralized applications (dApps) in the crypto community and are most popular on the Ethereum network. At this stage, it is critical to ask whether HBC20 is good enough to be used globally. Most importantly, how does HBC20 stack up against Ethereum, the dominant smart contract platform at the moment?

It’s worth noting that HBIT chose to build a second blockchain after HBIT rather than upgrade it, even though it was possible. According to the HBIT, adding smart functionality to the HBIT blockchain would have slowed network speed and made it less efficient. Smart contracts have a history of clogging up host networks, as evidenced by the December 2017 CryptoKitties problem on Ethereum and, more recently, the Solana network.

HBIT’s best choice was to establish a parallel blockchain to house smart contracts that would be compatible with Ethereum, the dominant dApp network. Building a completely new blockchain from the ground up appeared to be a bad idea for HBIT, which was racing against the clock to capitalize on the decentralized finance (Defi) and non-fungible token (NFT) crazes. Ethereum is the de facto ‘King of dApps,’ and the open-source nature of its programming may have made it simple for HBIT to split it.

To have a deeper understanding of HBC20, we must examine its attributes in greater depth to see what distinguishes it from every other blockchain on the market. This section delves into its components, such as its foundational principles, the consensus mechanism, and the ecosystem. After only a few months, the blockchain appears to be quite promising. It may be useful to look back and evaluate how far it has evolved, as well as whether any noteworthy changes have occurred.

HBIT designed HBC20 with three main ideas in mind that inspired the blockchain’s architecture and development. They are as follows:

Standalone Blockchain – HBIT required the HBC20 to be a stand-alone blockchain from the HBIT Chain. The decoupling of the two blockchains insured that there would be no service outages if one of them failed. Separating the two networks also allowed HBIT to adopt new technologies that were either not previously used or had negative side effects.

Ethereum compatibility – The most popular smart contract platform, Ethereum, did most of the heavy lifting for HBIT. It had a big user base, miners, and developers. Despite issues such as high gas prices and security concerns, the network has outperformed the competition. HBIT chose not to reinvent the wheel, instead using what worked for Ethereum with a few tweaks, most notably the consensus method.

Native Cross-Chain Communication – Although HBIT chose to construct HBC20 as a parallel chain to HBIT, it ensured native cross-chain compatibility between the two blockchains. Tokens on the HBC20 network means they may be exchanged using Metamask, TrustWallet, and any other wallet that supports the BSC.

Some of the other features are:

Block time is the average time it takes the network to generate one more block on the blockchain. HBC20 is a blockchain that generates new blocks every five seconds. By the time the block is finished, the included data is verified. Because this is where the money transaction occurs in cryptocurrency, a shorter block time means speedier transactions for HBC20.

Maintaining high transaction speed, decentralization, and security at the same time has been a major difficulty for blockchain inventors, dubbed the “blockchain trilemma” by Ethereum co-founder Vitalik Buterin. Scalability is essential for a blockchain network’s effectiveness as well as its overall best user experience. As a result, HBC20 prefers to create various technologies to boost network throughput and, as a result, prioritize scalability over decentralization and security. Which means it can manage Up to 100,000 Transactions per Second.

In an age of quick pleasure and short attention spans, especially in financial transactions, speed is critical. Recent events in the crypto sector, however, have demonstrated that decentralization and security are equally important. One example is the sequence of disruptions experienced by the Solana network, with the most.

With a throughput of 50,000 TPS and an average transaction cost of $0.00025, NFT and DeFi developers were flocking to the Solana blockchain. The network saw high traffic as a result of bots attempting to trade NFTs, which overwhelmed the network’s nodes. A “bug” was also named as the source of one of the earlier outages. These occurrences highlighted the negative consequences of the network’s trade-off, which sacrificed security and stability for speed.

Another incident, this time using the EOSIO network, demonstrates the pitfalls of the blockchain trilemma. On suspicion of suspected theft, EOS froze seven accounts. This action, however, was met with harsh criticism because it was undertaken by only 21 elected block producers, bringing into question the network’s decentralization. While transaction speed is vital, so is security and decentralization. After all, they constitute the foundation for the initial development of blockchain technology.

This is where HBC20 comes in to fix the problems, to make transaction speed an important statistic in the broad use and adoption of blockchain technology. The HBC20 blockchain has exhibited tremendous scalability, which is an essential prerequisite for future blockchains. As a result, HBC20 will dominate web 3.0 because it maintains appropriate transaction speeds without losing security or decentralization.

HBC20 has more benefits than any other blockchain network. It makes no concessions in any area to become a better alternative for hosting blockchain apps, but these choices may not endear it to other crypto consumers. So, what makes it a more appealing smart contract platform than other market players? Here are a few of the reasons why.

Transaction speed – HBC20 is now one of the quickest smart contract platforms, which contributes to its rapid growth. Blocks are generated every five seconds, as opposed to 13 seconds for Ethereum, making it at least four times faster.

Low gas fees – Each transaction on the HBC20 Blockchain costs roughly 0.000021 HBIT, with smart contracts costing somewhat more; all prices are listed in the documentation, depending on the kind of transaction.

Cross-chain compatibility – HBC20 will not only be compatible with the Ethereum virtual machine (EVM), but it will also support pegged coins from numerous other blockchains, allowing users to create several tokens for usage on the network. Token liquidity, usability, and value are increased through cross-chain compatibility.

HashBitPAD – An Official Platform where projects may be exchanged by forming Pools and offering liquidity in a completely decentralized manner. Users can launch their own initiatives on the LanchPad to raise funding and distribute their Tokens to investors.

NFT, Creation, and Marketplace – Here, anyone can make, sell, or purchase NFT collections made on the Blockchain.

Browser Wallet – A browser-based wallet that allows users to manage their HBITs and Tokens in one location.

Token Creation Tool – A simple tool for users to create their own Blockchain Token.

Mobile Wallet – A smartphone app that allows users to manage their coins. More to come, and we’re confident that many developers will begin developing applications on the HBC20 Blockchain.

HBC20 is a strong blockchain network that, in comparison to Ethereum, offers less in terms of innovation. The blockchain has advanced far faster than competitors in less than two months. It is worth mentioning, however, that Ethereum has previously executed a chain upgrade, which resulted in Eth migrating from a PoW consensus process to PoS, which has increased its speed, albeit not everyone is happy with it. In terms of scalability, this update will not be adequate to defeat BSC-based blockchains like HBC20.

As we haven’t covered everything there is to know about the HBC20, including TPS and Blockctiem. It is an exciting time for blockchain and cryptocurrency in general, and we strongly encourage users to dig in and learn more.

Furthermore, talking specifically about the functions currently available in their wallet on https://hashbit.org are only examples of how the HBIT Blockchain can be used for each type of application. Using all of the options accessible in the http API, it is possible to develop far more full and complicated services.

By connecting to https://hashbit.org, users will be interacting directly with the HBIT Blockchain, their Password is never kept, and transactions are completely secure. The Wallet is just a link between the user and the blockchain, designed to be as simple and intuitive to use as possible. Many more features will be introduced over time, and their WhitePaper will be updated to reflect this. The crew behind HBIT is working hard to get these online as soon as possible. So that’s all right now about HBIT and their new HBC20 Blockchain.

To know more about the platform, please visit:

Litecoin [LTC] holders might be ecstatic after reading these updates

SEC gives a thumbs up to nine WisdomTree blockchain-enabled funds