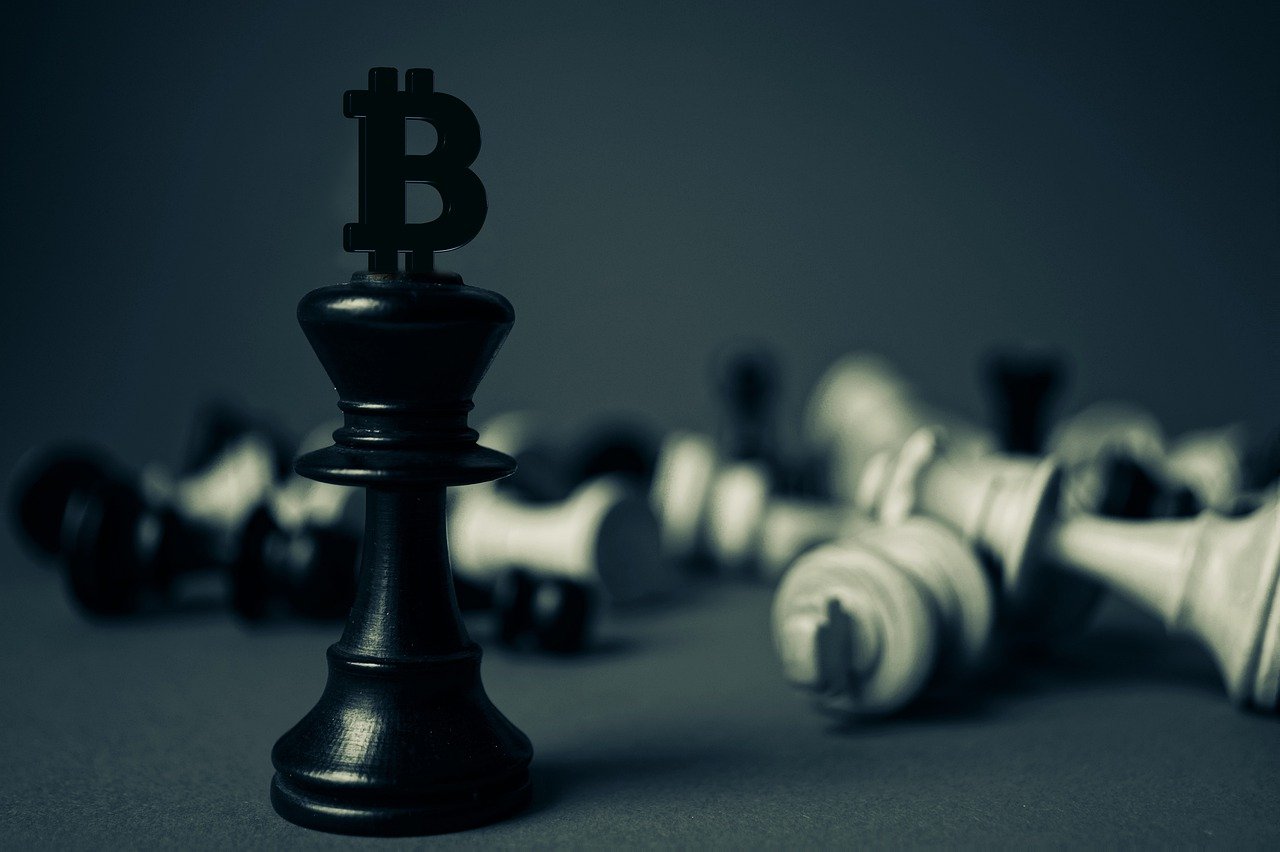 Bitcoin continues to outperform all the top ten cryptocurrencies with only Polkadot increasing more over the past week. The last quarter kicked off with some magnificent gains for the top coin as BTC saw close to 50% gains since the beginning of October.

Bitcoin dominance too was closing in just below 50% and at the time of writing as it neared a three-month high level. Much of the recent hike in dominance and price could be credited to the anticipation for a Bitcoin exchange-traded fund (ETF) and as the US Securities and Exchange Commission finally gave its approval for the first Bitcoin ETF, BTC comfortably sat above the $60K mark.

After endless denying and stalling of applications over the last four years, the SEC finally gave a green signal to ProShares’ Bitcoin Strategy ETF, which might be the very first one to see it launch next week. The company’s ETF would be tied to Bitcoin futures contracts, rather than the spot price of BTC, but its approval represented a landmark decision for the crypto space.

Some of the key differences between BTC Futures ETF and physically backed ETF are that Investors would not be able to withdraw BTC from the fund for arbitrage purposes. Additionally, since Bitcoin futures are typically in contango, or priced at a premium relative to spot markets, it could incur high costs and create downward pressure on price. While the intricacies of the same were many, as the market’s anticipation from the move heightened these seemed to be on the back burner.

One foreseeable trend throughout October was that Bitcoin’s price and search trends for ‘Bitcoin ETF’ had been soaring in tandem. 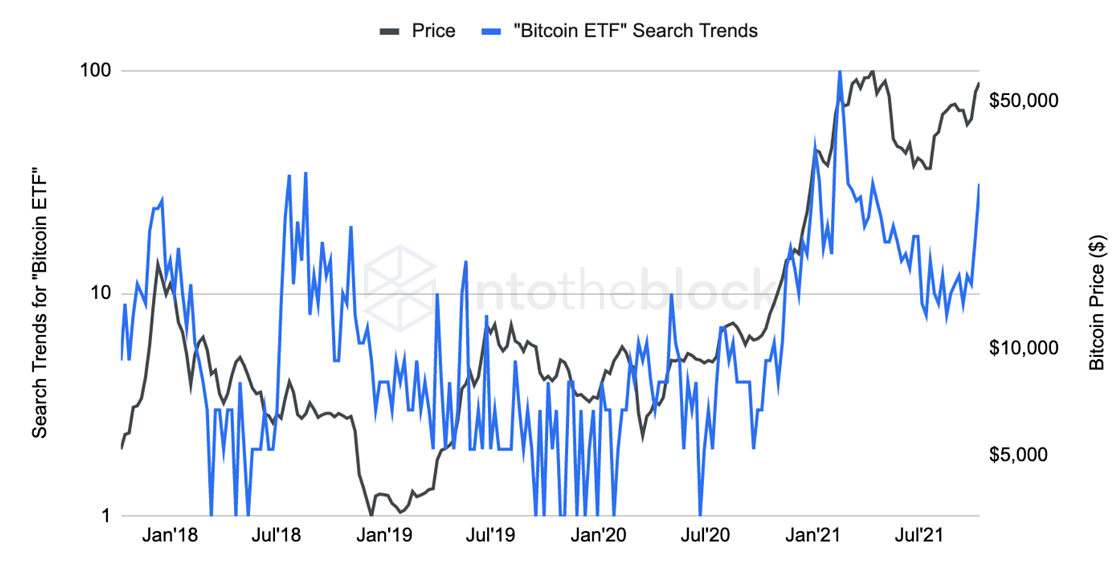 In fact, data from IntoTheBlock’s BTC social indicators highlighted that the correlation between Google search trends for ‘Bitcoin ETF’ and BTC’s price has climbed to 0.91. This indicated a very strong statistical relationship between the two.

The effects of the ETF hype were further evident as centralized exchanges registered tremendous buying activity after Bloomberg’s news of the SEC not posing opposition against the ETFs. Trades per Side for BTC highlighted some interesting patterns. The indicator aggregates the volume of takers based on whether they are buying or selling. In the after-hours of the news on October 15 itself, takers bought over 750 BTC in a minute on three separate occasions in just over three hours as average volume grew by over 20x within minutes.

Bitcoin all set to soar

With the top coin looking rather bullish on a daily chart, BTC sat close to the $62K mark at the time of writing. After highlighting around 4.05% daily gains, the king coin traded at $61,784 at the press time. While BTC looked like it was set for another ATH, bearish cases for the coin were still prevalent in the market.

Nonetheless, one of the strong signs of BTC’s current price not being a top was evident by looking at Bitcoin’s Realized HODL Ratio. The metric is a market indicator that takes the ratio between the one-week and one-two years RCap HODL bands. In addition, it accounts for increased supply by weighting the ratio by the total market age. While a high ratio at the time of writing was indicative of an overheated market, its value still held below the latest ATH six-month ATH which was seen at BTC’s $53K level. This meant that BTC still had room for growth. 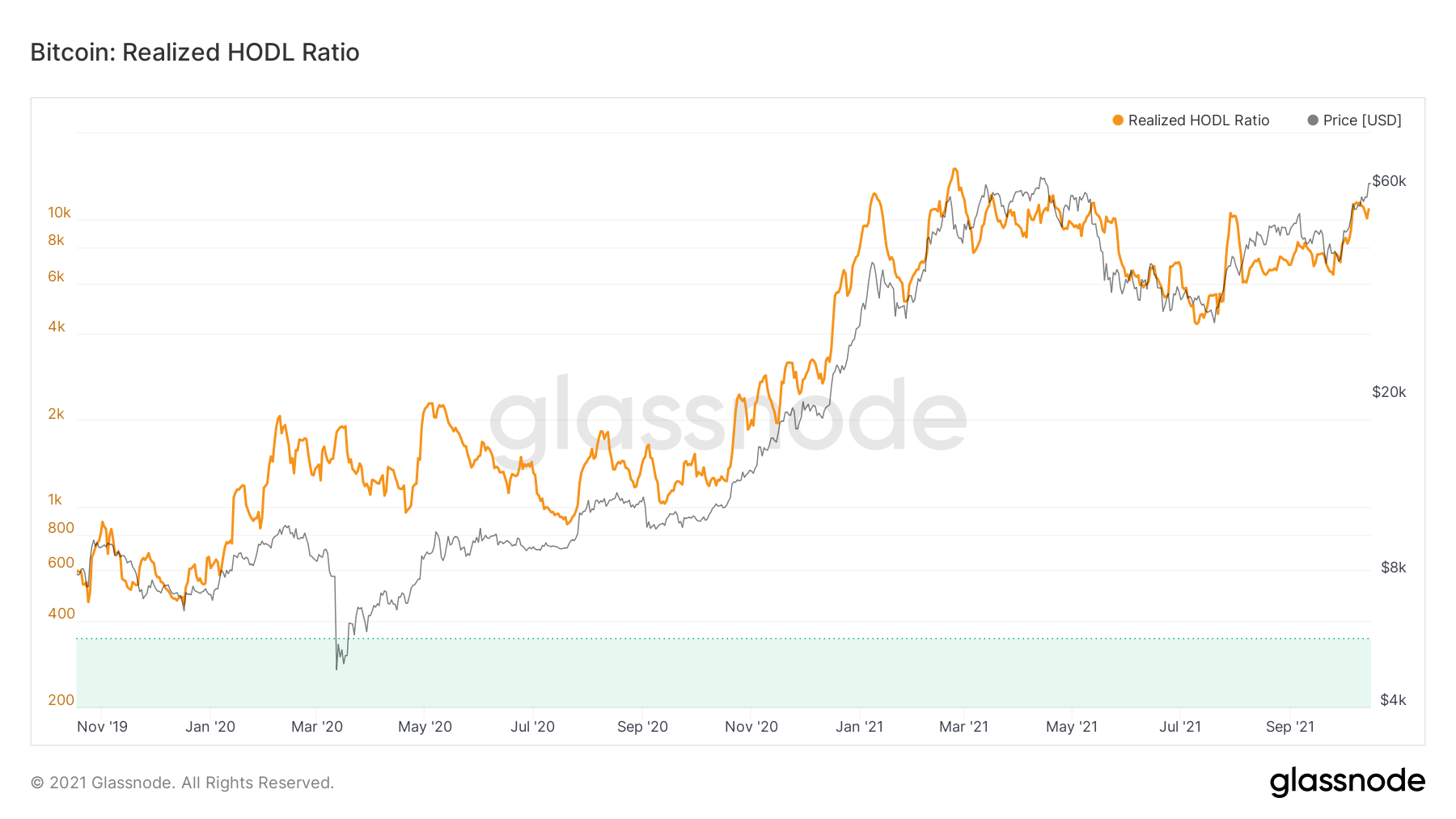 That being said, the sum of total fees spent on both BTC and ETH over the last week highlighted that the top two coins had registered double-digit increases in fees, showing growing demand to transact in their blockchains as prices rose. All in all, for BTC it seemed like an ATH was closer than it appeared.

Related Topics:Bitcoin ETF
Up Next

Bitcoin: A sustained stay above $60K is useful for more reasons than one