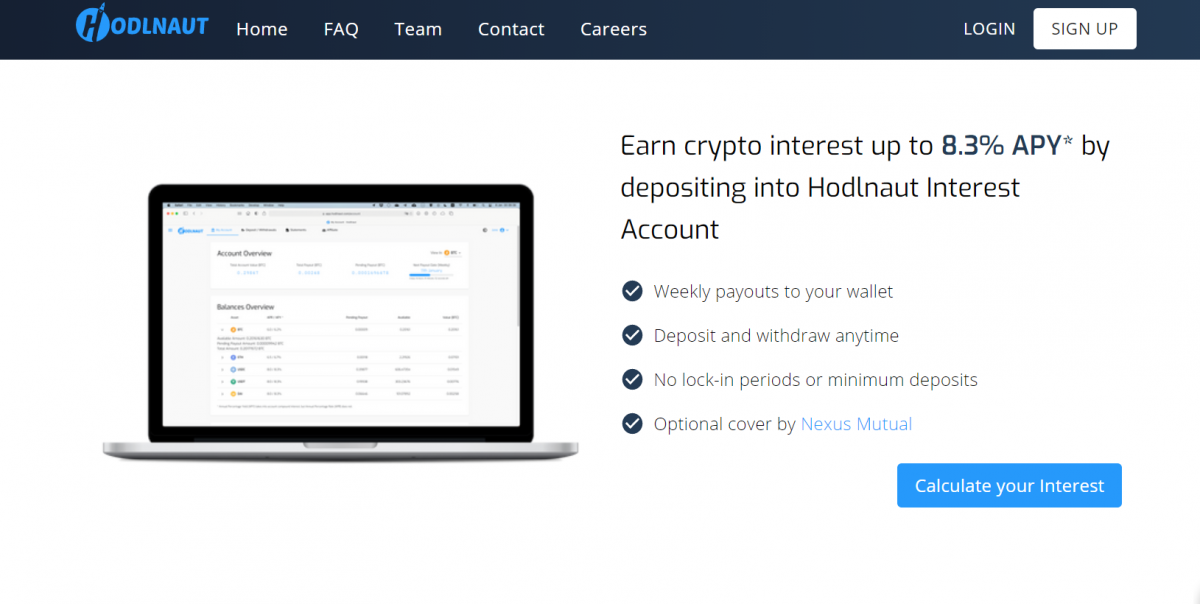 2020 was an extremely important year for the world of digital assets and Bitcoin surged towards its new-all time in December 2020. Several other cryptocurrencies such as Ethereum also appreciated above $1000, indicating a return of the 2017 bull-run. While 2017 was laden with risk and uncertainty, there was a sense of trust around the current bull-run as the crypto market rallied amidst major economic turmoil across the globe.

Unlike 2017, crypto investors were more inclined towards holding their assets at their moment than cashing out after making a quick profit. HODLing became a common thing among crypto users as people were starting to identify Bitcoin, Ethereum from a perspective of long-term investments.

In line with that sentiment, Hodlnaut offers its customer base to earn attractive interest on their cryptocurrencies by depositing them on the platform and lending them to margin traders.

Hodlnaut: Earn interest on your Bitcoin!

Hodlnaut is a Singapore-based organization that allows its user base to earn compounding interest on their digital assets on the platform, while its value appreciates in the real-market. As individual investors are continuously looking forward to growing their capital associated with digital assets, hodlnaut caters to such demands at a relative convenience.

The platform is ruled under the Singapore Law, which introduced the Payment Services Act on 28th January, and classified cryptocurrencies as ‘digital payment tokens.’ The organization is currently in a reviewing process for a license under Singapore’s central bank, the Monetary Authority of Singapore (MAS).

From a security perspective, the platform is established on Amazon Web Services(AWS) cloud infrastructure and it is completely SSL encrypted. For user transactions, the platform also offers and promotes the utilization of two-factor authentication.

How to get started

The signing up process with Hodlnaut is extremely simple. First, the user needs to create an account and undergo a simple KYC verification process.

The entire registration process takes less than 5 minutes and there are no deposit fees. Once the customer has deposited their asset on the platform, they can start earning interest based on the time period chosen, and it is directly deposited into the account.

The platform does not have separate charges other than a small withdrawal fee(0.0005 BTC) to cover network maintenance.

Initially, Hodlnaut was offering interest rates for the deposits of only three cryptocurrency assets which included Bitcoin, USDC, and USDT. However, according to a recent announcement by the platform, they have now added Ethereum and DAI stablecoin as well.

The current annual interest rates according to the website are listed below:

It is also important to note that all the deposits on hodlnaut automatically receive the best interest rate, depending on the market demand and previous months’ earnings.

Now, while the interest rate is an attractive feature, many users might be reluctant to lend their assets, assuming something might go wrong when it comes to taking those assets back.

In order to dismiss such concerns, Hodlnaut’s risk-management policy states that the platform will only lend their user funds to corporate traders “that have a mandate to borrow less than 1x their Net Asset Value”. In addition to that security, Hodlnaut’s website also states that in an event of loss of funds for its user base, the platform will be covering and paying the users from their equity funds.

As an extra layer of security, Hodlnaut also stores their user funds with BitGo until they have lent them to their margin traders or partners.

At the moment, Hodlnaut has over $100 million in assets under their management and over 1000+ users earning consistent interest rates on their deposits.

The services provided by Hodlnaut are extremely valuable for an investor or individual looking to consistently appreciate their value in crypto. Digital assets are a volatile form of asset and many users usually end up selling their assets when the market is facing a bearish period.

The fact that Hodlnaut allows its clients to end interest on their deposits throughout the year is an added benefit.

The platform is easy to use, there are no hidden fees and the security standards maintained by the organization are on an industrial level. The downside and drawbacks are minimal when it comes to using the platform, considering the users are always in control of their lending account and their digital assets.

This is how Bitcoin may strike $64k by end of February