LUNA delivered an impressive bull run in February and March courtesy of Terra’s ambitious plan to buy Bitcoin worth billions of dollars. The purchase is part of the crypto company’s plan to build a BTC reserve. LUNA might be on the blink of another rally thanks to Binance’s new UST staking feature which offers an attractive APY.

Binance recently announced the launch of its high-yield UST staking feature with an annual percentage yield (APY) as high as 19.63%. Such a high staking reward has the potential to trigger heavy demand for UST by users looking to take advantage of the high staking yields. Such an outcome will affect the demand for LUNA due to the UST mechanics in the Terra ecosystem.

LUNA is tied to Terra’s mint and burn mechanism which burns LUNA to mint the UST stablecoin. LUNA supply reduces as the demand for UST rises. Strong demand in the Binance staking ecosystem might yield such an outcome, hence creating a positive impact on LUNA’s value. The level of demand that the cryptocurrency will experience is directly correlated to the demand for UST.

LUNA achieved a new all-time high of $119.55 on 5 April after an impressive rally from its Q1 low of $47.  The cryptocurrency has so far managed to ward off a major price correction largely courtesy of the Terra blockchain’s growth and utility. 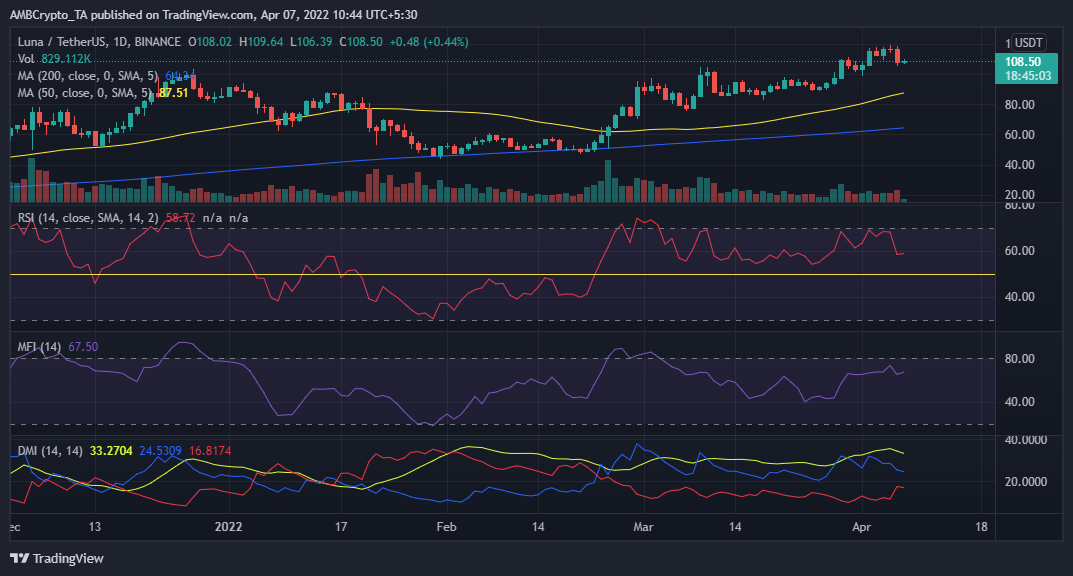 LUNA registered a slight pullback yesterday after achieving its new ATH during the previous trading session. Although the RSI shows a decline in the bullish momentum in the last 234 hours, the Money Flow indicator suggests low selling pressure.

What online metrics tell us about LUNA

LUNA’s developer activity metric on Santiment shows that there was a noteworthy increase in activity from 29 March up to now. It not only reflects the activities aimed at bringing UST staking to Binance but also other developments involving Terra’s anchor protocol.

The amount of LUNA held by the top wallets with more than $5 million worth of LUNA has been declining and is currently at its lowest level since November 2021.  We are yet to see a corresponding uptick in the top wallets in response to the latest developments.

Ethereum’s tale of increasing volume and decreasing price; here’s what it implies

Cosmos: How likely a recovery is as ATOM slips below support amid intense selling