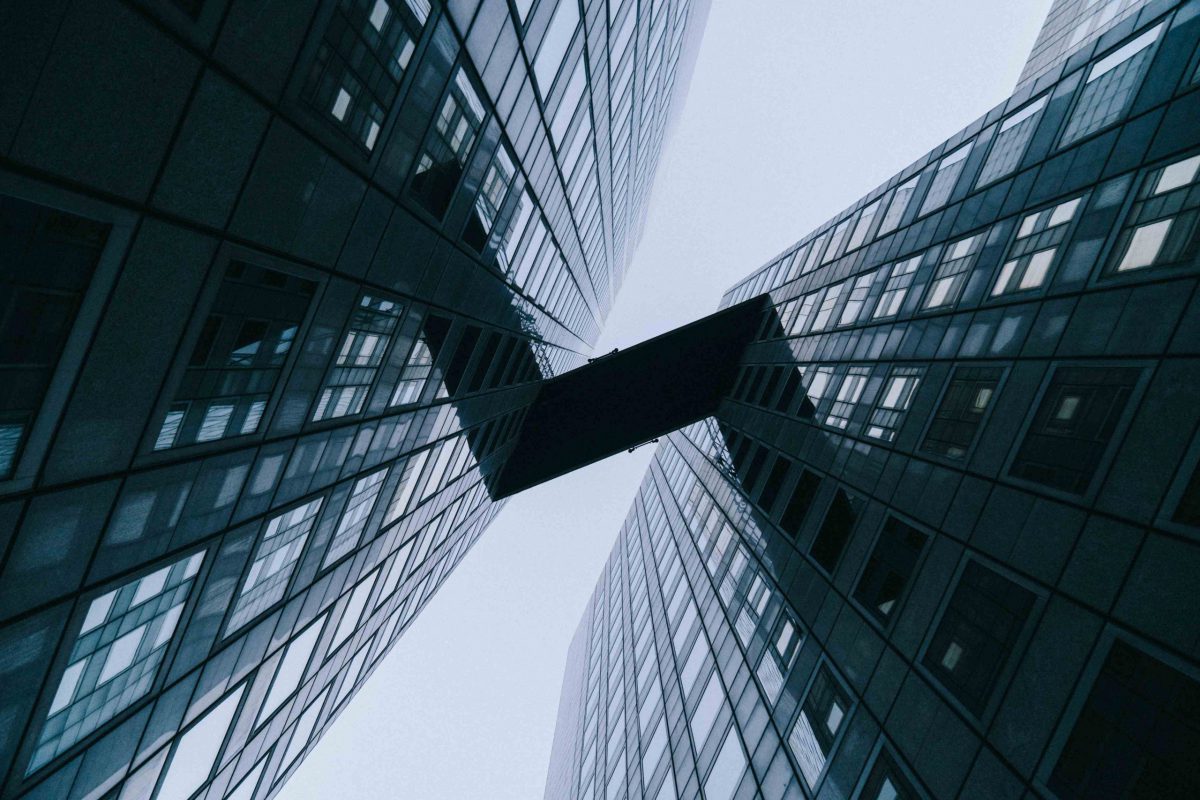 Based on the Ecoinometrics report, last week AMBCrypto reported on the rising dependence of Institutions on Bitcoin and vice versa. The idea of a Bitcoin Treasuries Index was originated and data was derived based on a set of conditions, which was met by a few publicly traded companies, currently invested in the digital asset.

Over the past week, BTC witnessed its largest crash in 2021, and the validity of Bitcoin and the Treasuries Index gained more prominence in terms of impact.

Bitcoin plummeted, so did MicroStrategy

In the recent analysis, the Ecoinometrics report suggested that the weight of the companies on the index will be proportional to the size of their BTC reserve. Microstrategy had the highest cash reserves in Bitcoin therefore its weight on the index was 53%. 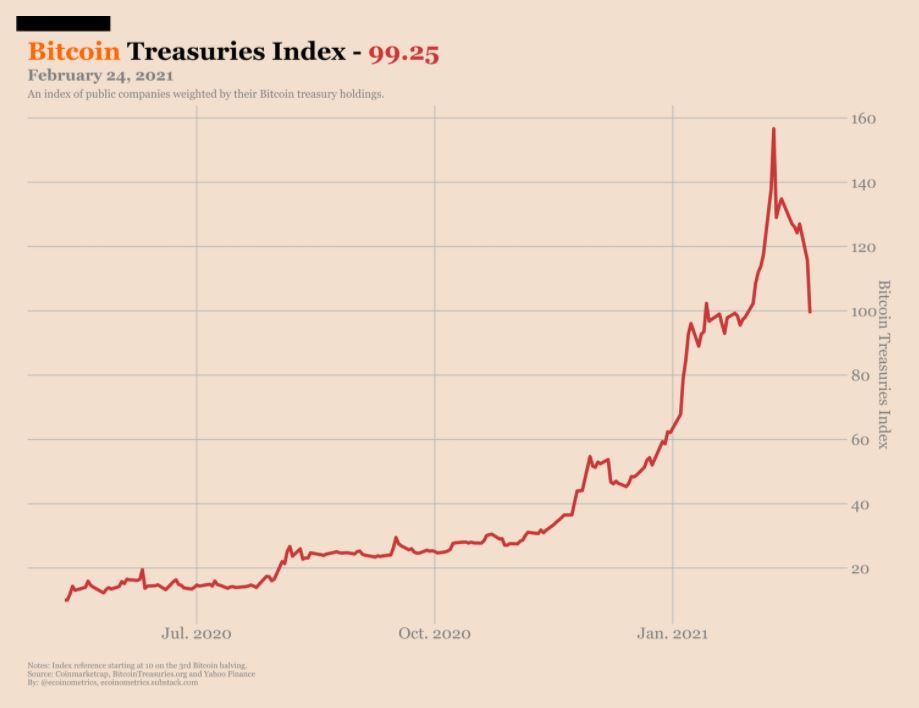 Now, accounting for the ~20-25% drop over the past week, the above chart illustrates the declining Bitcoin Treasuries Index. The rating was close to 110 but after the correction, it is currently down to 99.25.

The Treasuries Index registered a dip because the companies stock took a hit as well. 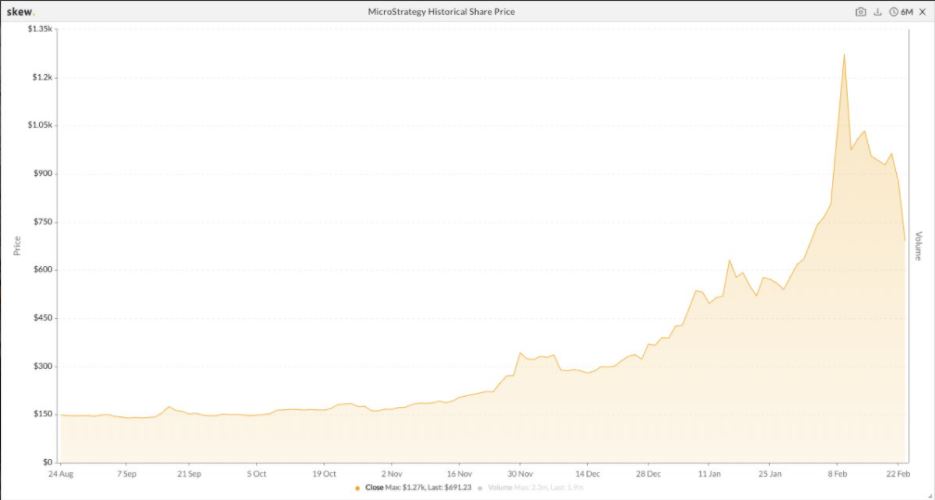 MSTR’s stock is currently down 50% from the peak and it registered its largest decline during the BTC crash. This narrative was speculated in the previous article and now the dependence of institutions on Bitcoin might be becoming more clear.

It can be inferred that Bitcoin is dictating the value of these company stocks as well and becoming a critical source of growth or decline for these corporations. 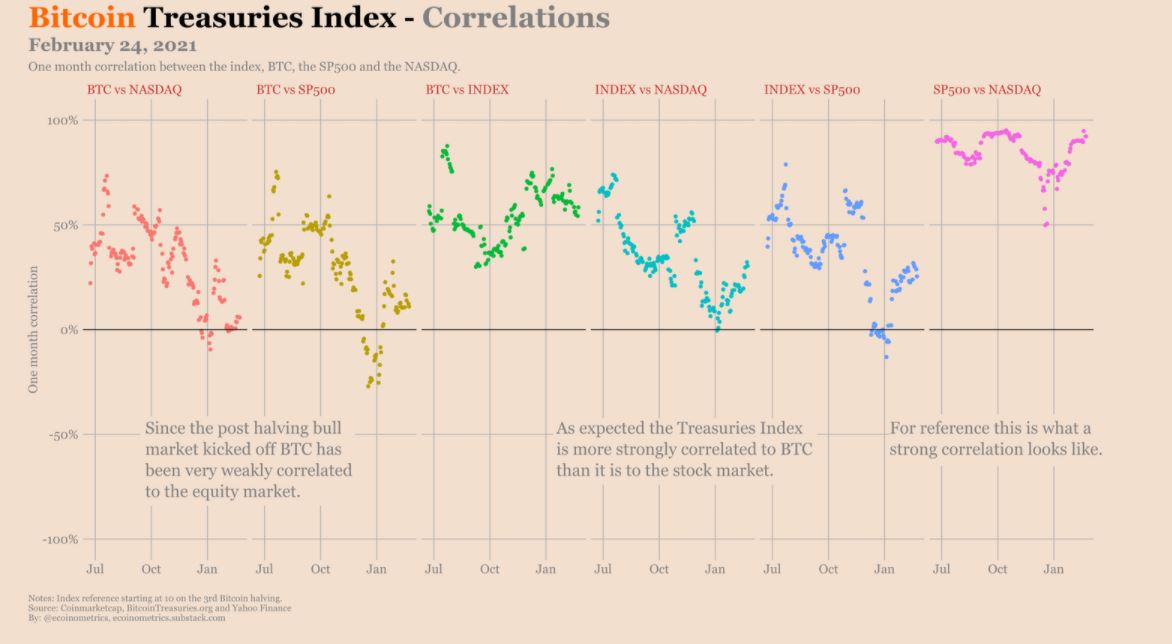 Square is putting more of its chips on Bitcoin and it seems to be fine with the fact that it is now more and more uncorrelated with the stock market. The companies included in the Treasuries Index have shown a strong correlation with BTC since the halving(65%) and only about 30% with popular stocks such as NASDAQ and S&P 500.

While market critics may suggest that such a high correlation with Bitcoin is risky, other traditional stocks have been more volatile than BTC over the past few months.

Will more public companies rush-in after the crash?

The possibility is definitely high. While BTC might be licking its wounds in the short-term, the long-term foundations for BTC are currently rocking solid. The asset is $30,000 over its last ATH, a couple of months after breaching it for the 1st time in 3 years. Bitcoin influence is only growing up, not down.

How miners decide the return on your Bitcoin portfolio