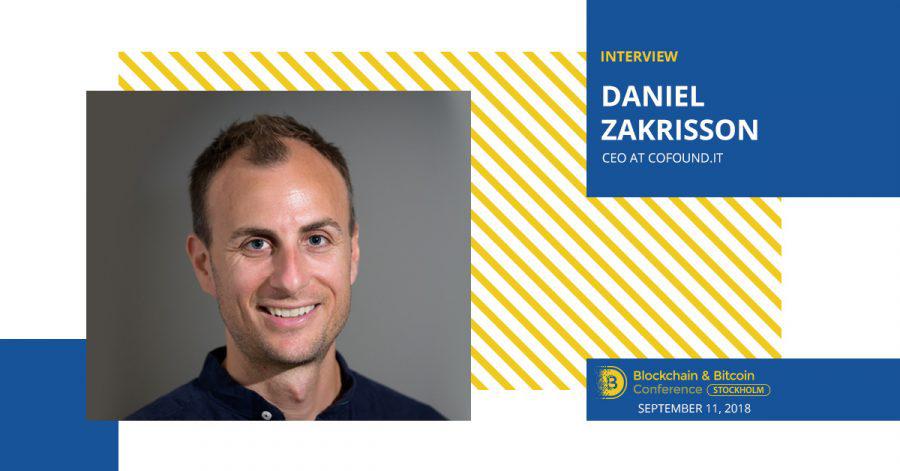 Startupers should initially treat an ICO as a tool for growing their business rather than just raise funds. It is the opinion of a speaker at Blockchain & Bitcoin Conference Stockholm: Daniel Zakrisson, CEO at Cofound.it Startup Accelerator. In the interview, he shares his perspective on the blockchain industry development in Sweden and gives tips for startupers aiming to launch ICOs.
Interviewer: Blockchain & Bitcoin Conference Stockholm (BCS)
Respondent: Daniel Zakrisson (D.Z.).
BCS: Hello, Daniel. Your company, Cofound.it, supports blockchain startups. How do you select startups to cooperate with?
D.Z.: Startups come to us via our community, partners (accelerators, funds etc), our website and conferences. We have a common process regardless how they come, intended to find out the real potential of a team and project and their maturity level.
BCS: What kinds of startups do request Cofound.it assistance most frequently? What do you think is the reason for that?
D.Z.: We have two main types of startups that approach us:

I think that the main reason for this is that we have become know for taking a genuine interest in helping startups.
BCS: What would you recommend a startuper who has a promising idea and a desire to launch its ICO to start with?
D.Z.: First really think through if an ICO is the best way to raise funding.
Second develop their idea, release code, technical white papers and validate their model. An ICO should come when they are ready to launch their network and can use the ICO to bootstrap users and services into their network.
BCS: What are the most common mistakes of startupers during ICO preparations?
D.Z.: Thinking it’s a way to primarily raise funds, it’s not. It’s a way to start your network.
BCS: What is the most uncommon application of blockchain that you have faced in your practice?
D.Z.: We have seen many different applications. The most interesting and uncommon ones are probably the ones pushing the boundary of the decentralised economy, such as aiming to launch a project with a completely anonymous team.
BCS: What do you think about the blockchain industry development in Sweden?
D.Z.: It’s finally taking off! It basically started a year ago with the early adopters. But Sweden will catch up and longer term. I really see large potential as much of the talent needed to scale bleeding edge tech companies exists in Sweden.
BCS: Please tell us more detailed about your presentation at Blockchain & Bitcoin Conference Stockholm.
D.Z.: I’m planning to talk more about some of the real token models and practical use cases are in actual use or can be used today. Some examples include Token Curated Registries and Discount Tokens.
Register to Blockchain & Bitcoin Conference Stockholm.