After a bullish rally dating back to the end of October 2020, Bitcoin registered a massive correction yesterday, one that took the industry by surprise. While the market has screamed correction for the past few weeks, when it finally unfolded, the emotional turbulence was outrightly evident. A whopping $6.86 billion longs were liquidated, leading to a lot of panic.

Many speculators drew similarities between the latest decline and the March 2020 crash, but the numbers do not suggest the same. The 5-day meltdown in March 2020 was an excess of 47%, while the present capitulation was worth 26.5%.

While we cannot move away from the bearish sentiment at the moment, it is imperative we analyze the market objectively.

Ethereum and Alts took a greater tumble; Why?

In 2021, the average market correlation between Bitcoin and the rest of the market was the lowest. Several altcoins were rallying on their own accord. Many outperformed Bitcoin, but it should not surprise anyone that BTC’s decline was met with a colossal altcoin splat.

A week ago, Ethereum registered its all-time high of $4,375, and yesterday, it fell to $1,880 at one point. Cardano, Binance Coin, XRP, etc. registered similar movements. However, the length of the decline, at press time, was possibly due to the flip in Bitcoin’s market dominance.

After months of declining dominance, Bitcoin gained momentum above other assets yesterday. Leading to a greater decline of liquidity for altcoins, the current recovery would also depend on Bitcoin’s direction. Once again, Bitcoin will be responsible for an extensive market drive. 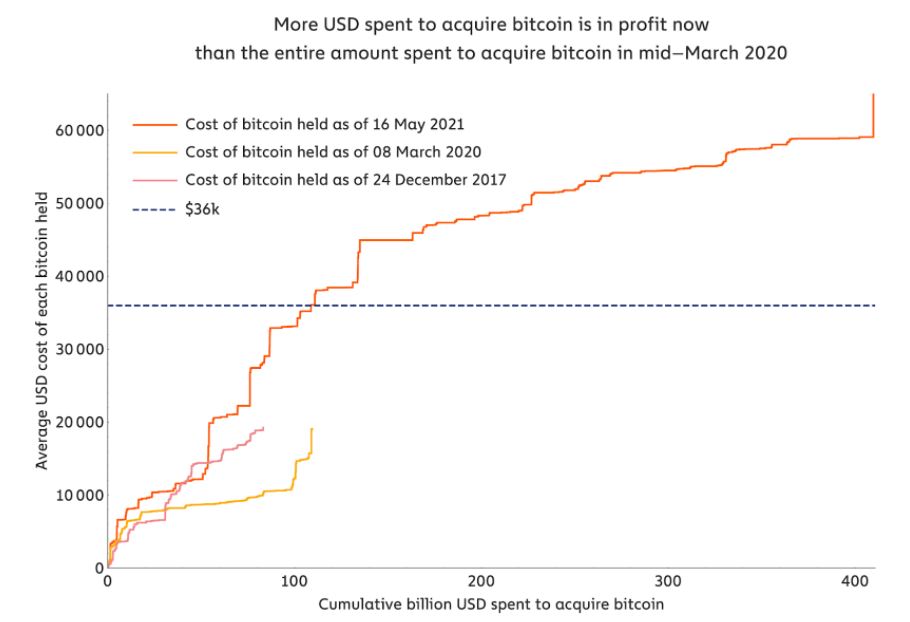 While many are suggesting that the bull run is over, according to Phillip Gradwell, Chainalysis’s Chief Economist, the stakes are much higher for investors now than in March 2020. Analyzing the current cost curve, Gradwell suggested that the amount of BTC held in May 2021 is significantly higher than in March 2020. Over $410 billion in BTC acquisitions have been made since March 2020, and right now, there is more incentive to resolve the current market price structure, than to sell and liquidate their holdings.

Additionally, he mentioned that the selling pressure has been more retail-oriented as institutions may have already bought the dip and Bitcoin inflows into exchanges have been relatively low when compared to past sell-offs.

Are we completely over the hump though?

The quick recovery from $30,000 has salvaged a little bit of optimism over the past day. And yet, Bitcoin is not completely off the hook as the current surge could be a case of Dead Cat Bounce. A Dead Cat bounce is a market situation where the price momentarily breaks up, before continuing on another downward surge again.

One of the main narratives supporting this direction is the rejection by the 50-period Moving Average. As highlighted by the chart, Bitcoin has continuously retraced down from the 50-MA over the past week. Hence, a dead cat bounce scenario may see Bitcoin re-visit $35,000 again, before the price pushes back up.

A bullish confirmation would be a sustained recovery over $42,200 within the next 24-48 hours. That would invalidate the bearish short-term structure, and the market may move towards higher highs once again.

Despite price drop, around 93% of Ethereum investors are still facing this