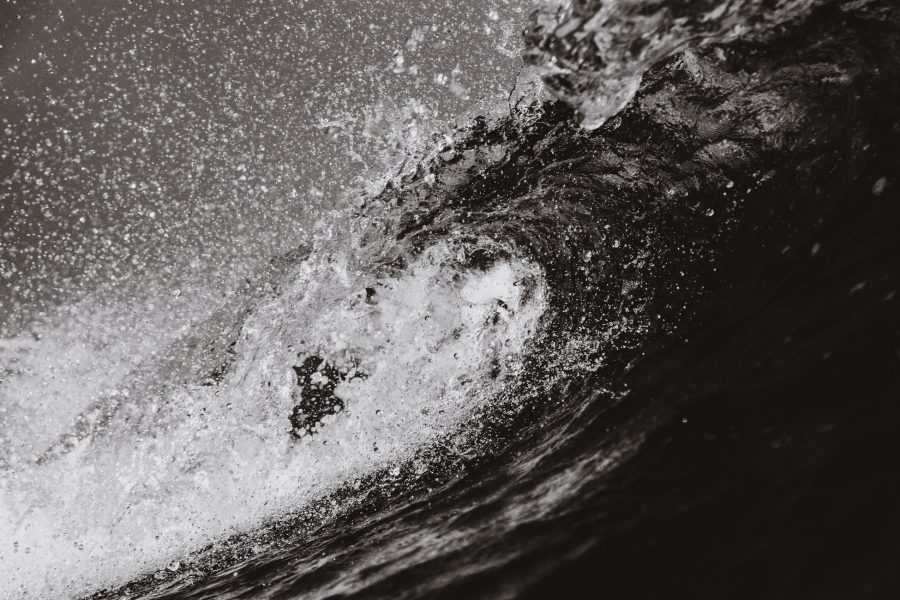 Litecoin‘s price was forming lower highs on the charts, suggesting the end of an uptrend in the medium-to-long term. However, in this lower high set up, the price formed a bullish pattern. A bounce/close above a critical level would point to a 10% to 20% surge on the horizon for the cryptocurrency. 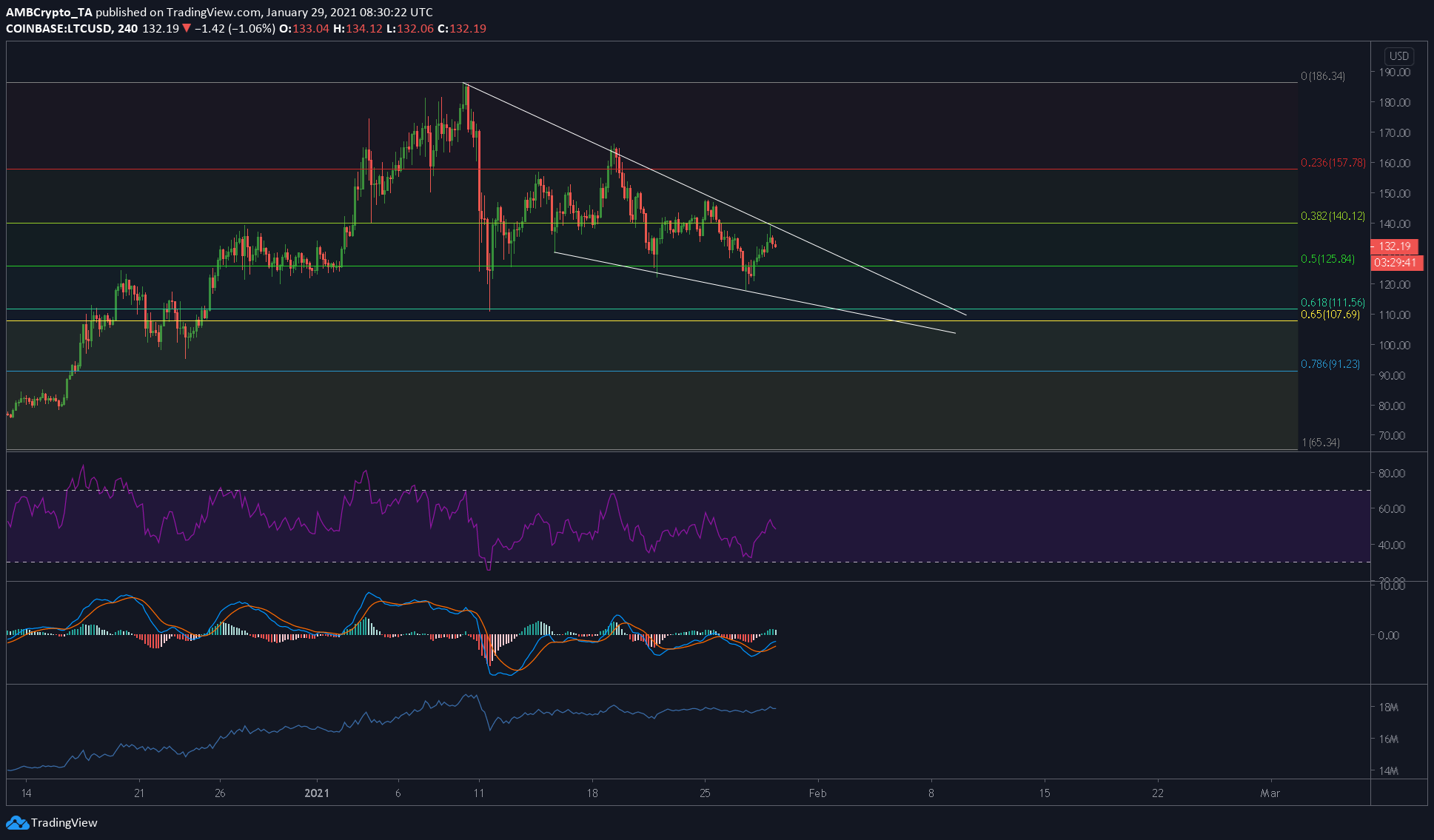 After hitting a local high at $186, Litecoin was trading at $146 at press time, while stuck in a bullish wedge pattern. The price had already been rejected at the upper trendline of the wedge and it was heading towards its critical support at $125.84, a level that coincided with the 0.5-Fibonacci level.

A bounce from this level and a subsequent close above the upper trendline of the channel would point to a bullish breakout. However, a failure to do so and a close below the 0.5-Fibonacci level would indicate the continuation of the sell-off.

The RSI indicator underlined lower highs and pointed to a decrease in buying momentum. The MACD indicator projected a short-term bullish outlook for LTC, while supporting the same was the OBV indicator, with the latter noting a constant increase in volume.

The sell-off at this level wasn’t done yet, at press time, hence more southbound movement for LTC can be expected in the near-term. However, in the medium-term, Litecoin continued to seem bullish due to the falling wedge pattern. 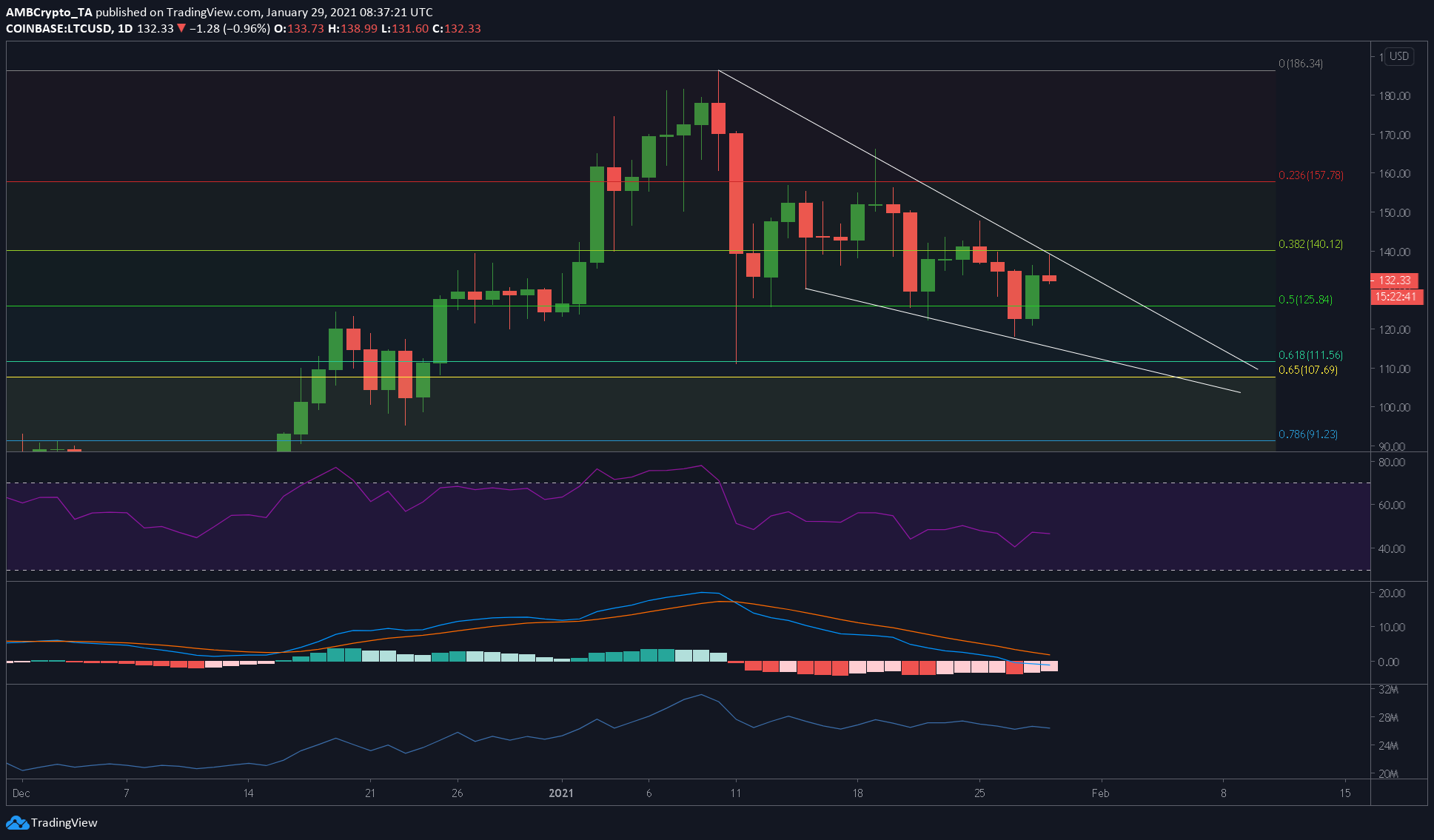 The 1-day chart showed that the drop resulting from the rejection at the upper trendline of the falling wedge may exceed the 0.5-Fibonacci level at $125.84. The next immediate support was above the golden pocket at $118.63.

Hence, a drop up to this level [ie., 11.34% ] can be expected from where Litecoin was trading, at press time. To be conservative, a close below the 0.618-Fibonacci level at $111 or even $107 would spell disaster for the cryptocurrency.

Litecoin’s prospects in the near-term seemed bearish due to the rejection at a critical resistance level. However, the coin showed promise on both the 1-day and the 4-hour timeframes. A close above the upper trendline could push LTC to $140 following a minimum surge and $157 if the buyers step up their game.

Why Bitcoin Futures OI climbing to pre-ATH levels is important