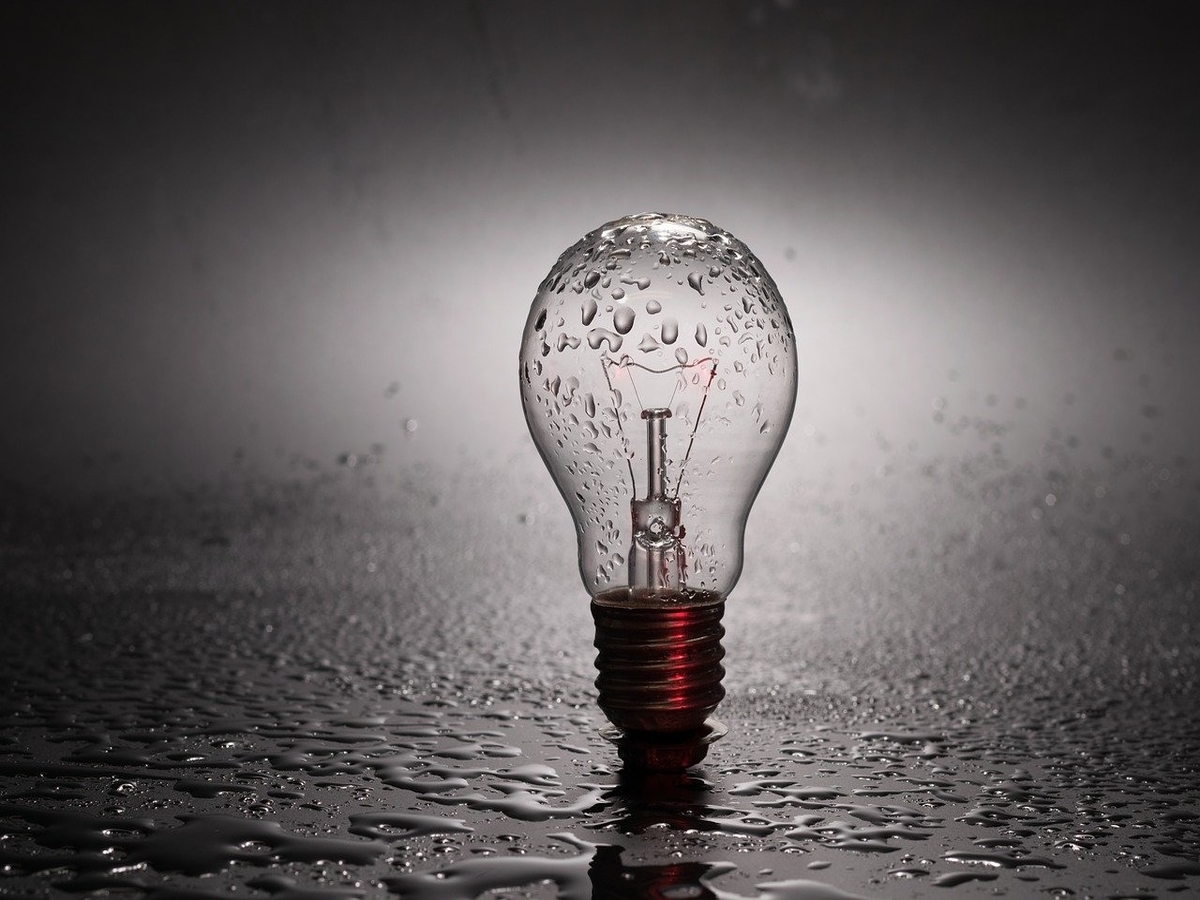 Litecoin’s price has seen its own share of ups and downs this month. However, of late, the downs have been more prominent than the ups on the charts. Inevitably, the alt’s market cap shrank. As a result LTC has slipped on CoinMarketCap’s rankings chart as well. The alt that was once a part of the top 10, occupied the 16th position at the time of writing.

Barring one instance since 7 May, LTC was evidently trading below $200. In fact, its press time state was even worse with the alt valued at $151.5. 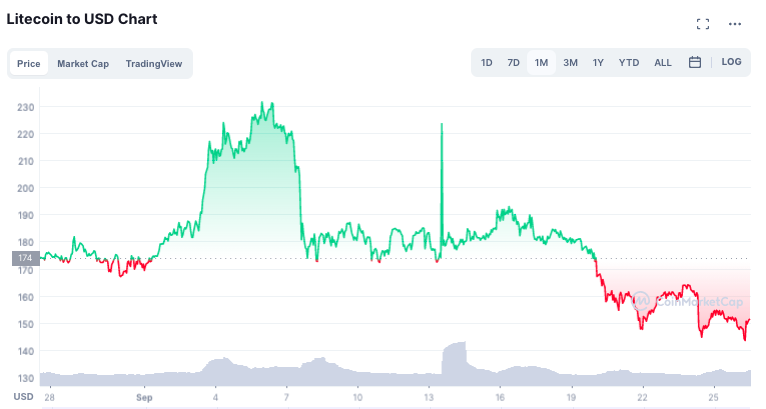 As per the price charts, the odds of LTC rallying seem to be quite minimal, but the state of the coin’s metrics hint towards a slightly contrasting trend.

Selling pressure coming to an end?

The alt’s market value to realised value ratio has been declining since the first week of September. The same has been revolving around the ‘1 line’ of late. Despite the downtrend, the chart below clearly highlights that the current level is way higher than that of June-July. By and large, this indicates that HODLers are earning more currently when compared to that period. 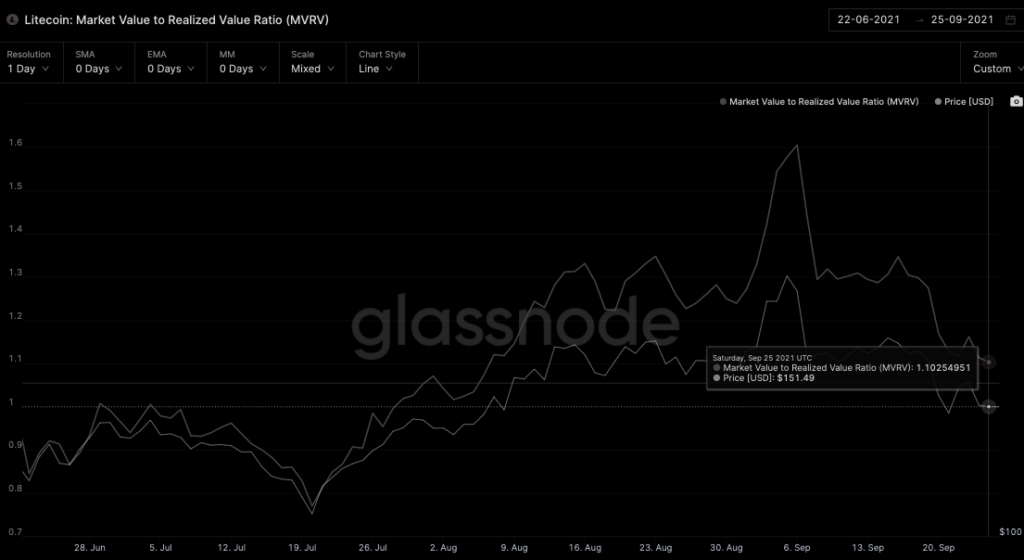 The SOPR or spent output profit ratio, on the other hand, has remained below 1 since 17 September. While this ratio highlights the degree of realized profits/losses, its press time level below 1 suggested that the selling pressure might be coming to and end, and sellers would capitulate shortly.

If such a situation manages to unfold in the coming days, the odds of LTC’s price rallying would enhance. The alt’s liveliness has additionally been declining since the 15 September. Typically, this is the ratio between the coins days destroyed and coin days created. Usually, the liveliness increases whenever the long-term HODLers liquidate their positions and decreases when they accumulate or HODL.

As can be observed from the chat attached, it’s quite clear that the HODLing behavior has been dominating the market. This is typically a healthy sign. Looking at the inclination of the curve, it can be said that the current trend would be able to prolong itself for the next few days. 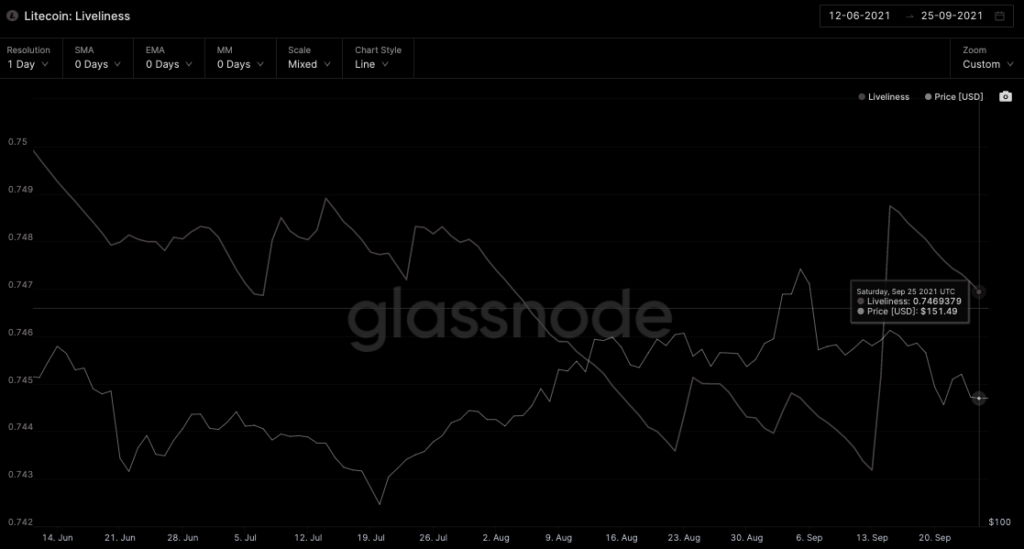 Despite the rosy state of the aforementioned metrics, it should be noted that Litecoin’s price has seldom moved without the backing received from Bitcoin. Having said that, it should be noted that the current correlation between these two coins is quite high. Thus, only when the broader market’s rally sets foot, LTC’s price would be able to inch higher.