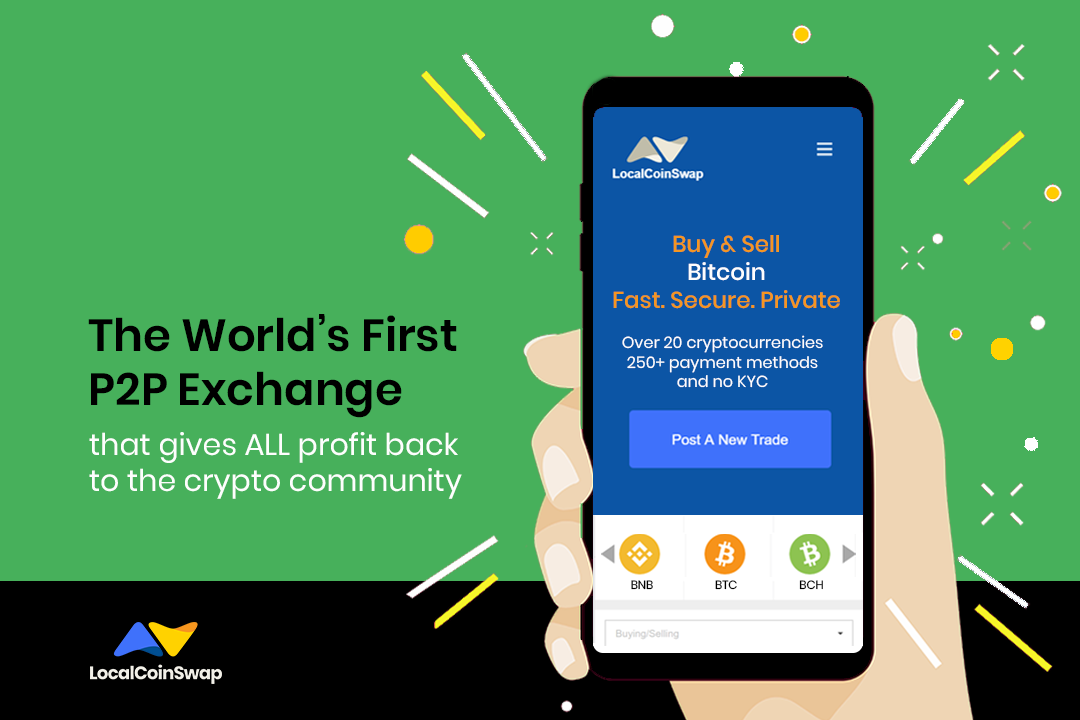 Hong Kong, Release: 26 February, 2019 LocalCoinSwap, the world’s first community-owned, decentralized, peer-to-peer (P2P) Bitcoin and Altcoin cryptocurrency exchange, has officially launched and is taking direct aim at LocalBitcoins with a fresh new mobile-first design, no KYC and a platform that gives 100% of its profit back to the crypto community.
The launch of the LocalCoinSwap P2P cryptocurrency exchange means that you can now securely buy and sell the largest number of cryptocurrencies, anywhere, anytime, with anyone, in over 190 countries around the world, with no KYC, or unnecessary ID verification to get started.

The new LocalCoinSwap P2P exchange is user friendly and easy to use.
LocalCoinSwap currently has 23 different cryptocurrencies, more than 250 payment methods, 180 fiat currencies, secure escrow protection, 24/7 customer service, no fees to create advertisements and no limits on withdrawals or deposits.
Buying and selling cryptocurrency has never been so fast, secure, private or profitable.
Similar to LocalBitcoins, the LocalCoinSwap P2P exchange functions as an OTC marketplace where anyone can create their own business buying and selling cryptocurrency. In contrast to LocalBitcoins, which has introduced heavy KYC rules recently due to ongoing regulatory changes in its home jurisdiction of Finland, LocalCoinSwap offers traders the option to trade with anonymity.
Nathan Worsley, CTO, and Co-founder of LocalCoinSwap said:

“We are thrilled to be launching what we believe will become the number one P2P cryptocurrency exchange worldwide. Launching LocalCoinSwap is the realization of my dreams, and I am incredibly proud to have the opportunity to not only offer financial inclusion to people from all around the world but to also give back to such a passionate crypto community.”

In addition, LocalCoinSwap is the only platform that gives 100% of the profit from the exchange back to the crypto community in the form of cryptocurrency dividends which ensures that P2P traders have the opportunity to own the exchange they trade on and make even more profit.
There is also a lucrative LocalCoinSwap P2P Referral Program that ensures both the referrer and referee profit further from all trading fees that the referee pays. 10% of the small 1% fee taken from each successful trade goes to both the referrer and referee in the same currency traded. The tiered program is even more profitable for the referrer if they own LCS Cryptoshares as the reward can be up to 30% at its maximum.
Daniel Worsley, COO, and Co-founder of LocalCoinSwap said:

“We are excited to put profits back into the hands of the community in the form of the cryptocurrencies actually traded on the website. So, for example, if Bitcoin, Ethereum and Dash are traded on the platform, then our community receive profits in Bitcoin, Ethereum and Dash. We love that we are able to create a real passive income for everyday people. Why trade on another P2P platform and hand over your profits to a monopoly, when you can trade on LocalCoinSwap and take home the profits yourself?”

BitMart Partners with Yanda and Shrimpy to Simplify Portfolio Management