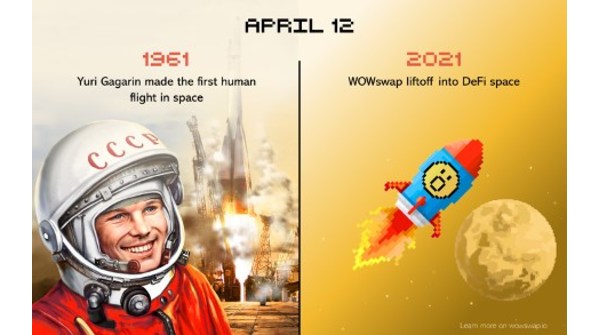 Traditionally, Leverage or Margin Trading has had a very niche group of users who had to be highly skilled and technically sound in their knowledge of the market in order to reap its benefits. With the creation of cryptocurrencies, this scenario has seen a significant change as almost all major crypto exchanges now offer the option of margin trading.

With the steady growth in DeFi (Decentralised Finance), this too has changed. What was originally a centrally controlled system wherein platforms and exchanges controlled and leveraged their trading rules, liquidation procedures, assets, and capital lending rates, is giving way to a decentralized system lead by the community.

Driven by this mission, WOWSwap is a decentralized exchange run by the community, one that allows users to benefit from its protocol and make profits through leveraged trading. Its community-driven approach gives the user an opportunity to create and operate common liquidity pools, liquidation procedures, and much more.

Leverage Trading refers to borrowing funds in order to increase a trader’s position size and market exposure, therefore, increasing its profitability. A trader’s initial investment is called the ‘margin’ and is the collateral used in case the asset’s market price moves in the opposite direction. Margin trading lets the traders benefit from both bullish and bearish markets by opening both long and short positions.

WOWSwap’s platform caters to the most liquid tokens on PancakeSwap with up to 5x leverage. These tokens include ETH, WOW, CAKE, BTCB, ATOM, AUTO, DOT, YFI, UNI, SFP, ALPHA, TWT, SXP, LINK, ADA, SPARTA, BRY, BAND, FIL, LIT, LTC, JULD, UNFI, BIFI, BDO, XVS, BSCX, and zSEED. Later on, the community will have the chance to vote on the addition of any more tokens for trading on their website. 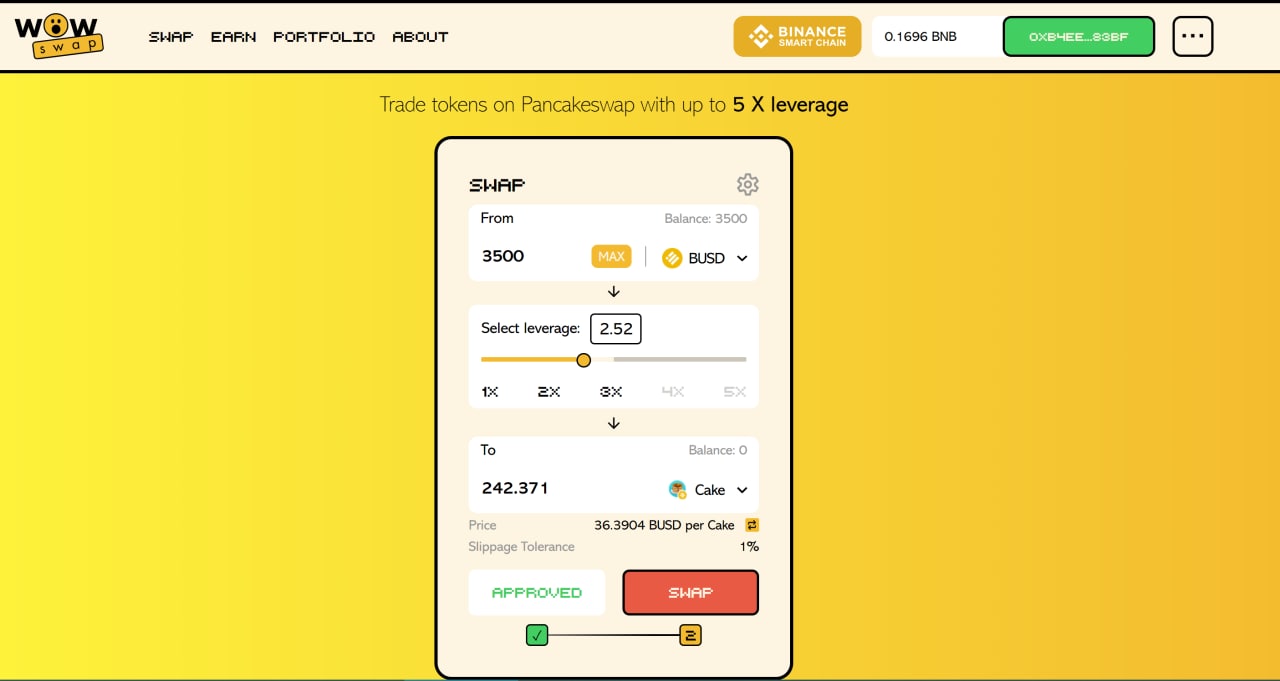 The platform allows individuals to provide liquidity to BNB and BUSD on BSC network and MATIC, ETH and USDC on polygon network. This allows traders to use these funds in order to finance their leveraged swaps on decentralized automated market makers (AMM). The individuals earn a passive income from traders who pay an Hourly Interest Rate on the amount. The platform is also all set to start liquidity mining from the end of April. 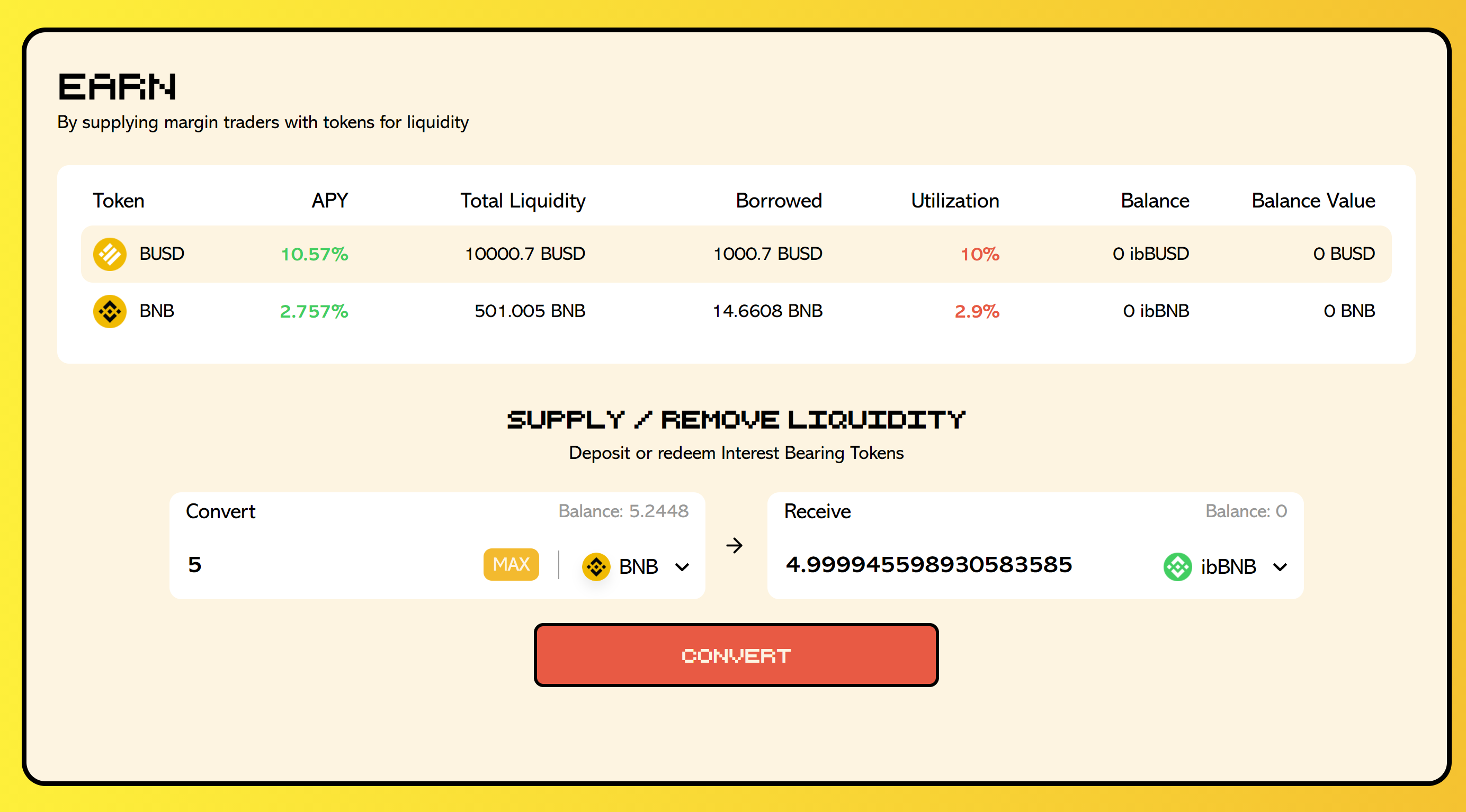 In the case of liquidity providers, their tokens need to be converted from BNB/BUSD to ibBNB/ibBUSD, which are interest-bearing tokens in order to add liquidity to the pools.

While buying a token with leverage on the platform, a user is given information regarding the borrowed amount and the Hourly Interest Rate (HIR) for it. After a swap is done, ‘proxy tokens’ (ERC-20 transferable tokens) are provided to the user which is pegged 1:1 to the real tokens.

These ‘proxy tokens’ are then changed into real tokens for BNB/BUSD on PancakeSwap to repay the loan to the liquidity pool and the remaining amount is then transferred to the user.

The protocol charges 5% of net profits made by the traders and divides it equally between their insurance fund and expenditure to buy and burn WOW tokens. The users are aided through this extensive process, through the interface used by the WOWSwap platform which is minimal and relatively easy to use even for amateurs.

As Liquidation events cannot happen on their own on the WOWSwap platform, a margin caller needs to trigger it. If a successful liquidation occurs, the margin caller would receive a liquidation reward which is currently set at 5% but can be changed later.

The Portfolio section provides extensive details about the user’s transactions and other details such as its current position size, its value, debt, HIR, and position health.

As mentioned earlier, the WOWSwap protocol is managed by a decentralized community of token holders and their delegates. These delegates control the addition or deletion of tokens by voting and presenting proposals, which are both executable codes. Users can delegate and/or receive their voting rights from other users. Once a user proposes voting on a proposal, it remains open for 3 days and once a majority is achieved, a 24-hour timelock kicks in after which the proposal is broadcasted to the network.

Their team is currently working on the platform’s governance and the interface for adding proposals and voting is in the pipeline and scheduled to be launched very soon.

The WOW token public sale which took place on the 25th of February 2021 achieved the record for the fastest ICO sale in the world. The backers of the token sent over $11 million worth of BNB (Binance Coin) to the token sale smart contract and therefore, the $700k hard cap closed within just 9 seconds of the sale’s opening.

A BSC Scan of the transaction history of the public sale contract showed that over 1000 unique wallets participated in the sale, but only 111 buyers succeeded in acquiring the token. For the 954 remaining users, the platform later rolled out a special rewards program.

The WOW token has a limited supply of 1,000,000 tokens which would be used for the protocol’s governance and community rewards system. Currently, the WOWSwap token has a market cap of $7.71 million dollars with its current price at $29.78 dollars for a token at the time of writing.

The community tokens will be distributed to the users over a span of 18 months in the following manner,

In the public sale, 230,000 WOW tokens were up for sale with a 3-month lock-up period. The funds collected from the public token sale would be used to provide initial liquidity for leverage traders and accelerate the development of the protocol.

While 90% of the total funds would be used to provide liquidity on PancakeSwap, protocol development, marketing, BNB lending, and audit, the remaining 10% would be kept as a reserve for further expansion of the protocol.

WOWSwap seeks to bring the concept of Leveraging and DeFi together and presenting it in a simple yet effective manner for its users. The platform set records even before its actual launch with its ICO, proving that it is building an enthusiastic user base.

With its instant governance model, it is looking to create a community-driven platform where each user will have a say in the implementation of its proposals. While lenders can earn a passive income by becoming a liquidity provider, borrowers can make profits and save up on gas. In this way, WOWSwap is looking to offer something to everyone.

WOWSwap also has an active Telegram, Medium, and Twitter to get in touch with its users.

Analyst on Bitcoin: I know it sounds crazy, but I think this is going to happen