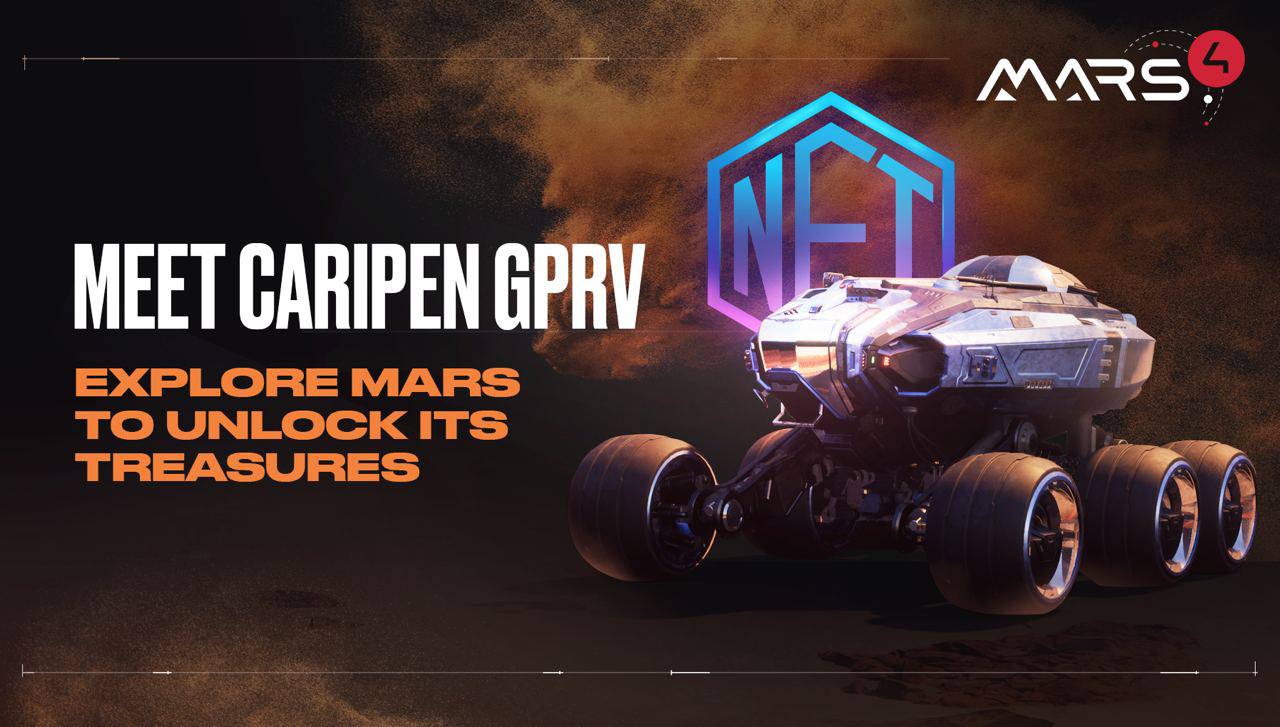 The first boots on Mars belong to virtual humans. The demo version of the Red Planet-based survival game, Mars4, is already available to anyone. Players all around the globe have been exploring Mars already, enduring the harsh elements and building their first shelters. But Mars is enormous, and it takes a sturdy vehicle to traverse its surface easily. In addition to land plot NFTs that serve as playable zones in the game that players can own, Mars4 released the Caripen GPRV, a vehicle NFT suited for exploration and surveying the red planet. While these NFTs are used in the game, they also generate income for their owners outside of it.

Mars4 represents a paradigm shift in NFT games. Play-to-earn games are criticized frequently for being tedious: in many of them, players end up monotonously repeating the same task over and over again. The main draw to these games is the ability to earn from them – but this leads to unstable economies because of a lack of engagement with the game over the long term. Crypto gaming doesn’t have to be like this. The team behind Mars4 took the matter into their own hands and decided to create a genuinely fun game that engages players while also offering opportunities to earn.

The Mars4 game feels like a traditional game, a game users can play in their leisure time because it offers countless potential outcomes and adventures. The NFTs allow players to monetize their hobby but don’t overwhelm the platform. Mars4 is one of the first examples of how NFTs could be integrated into gaming: as a tool to enhance the experience instead of being the sole focal point.

If users have a vehicle NFT in their wallet, they can already use it in the game to explore the vast Mars planet. But driving around Mars is not the only use case for the Caripen GPRV.

Earn from Mars4 with vehicle NFTs

All Mars4 NFTs are created to generate income for their owners. As they serve different functions, earning from them also differs. The Caripen GPRV is unique because users can make money from exploring Mars.

Explore and mine lands to make a profit

Every land plot NFT has six slots of hidden resources. Some of the resources are more common, while others are extremely rare, but all of them are needed to survive on Mars. Users can use the Caripen GPRV to unlock their land plot resources that can later be mined and sold as NFTs through the planned in-game market.

Players who own Caripen GPRV vehicle NFTs can also explore other people’s lands and earn from it, so it is a suitable NFT for those who do not have land plots themselves.

As with all NFTs, their prices can jump quite drastically.  Since Mars4 NFTs are limited in supply, users can expect the prices to rise – especially when the full game is released, and more players are jumping in as the game grows.

In addition, there are fewer vehicles than landowners, thus some of the investors won’t have Caripen GPRVs in their collection and will rely on paying others to explore and mine their lands or will purchase their vehicles from the secondary market.

An excellent time to start a Mars journey

With the first game demo already out, Mars4 is ahead of many competitors. The project is being developed fast and more than half of the land plot NFTs are already sold. The addition of Mars4 vehicle NFTs opens up many new possibilities in the game and is the bedrock of future content and improvements. Not only that, but with a lower entry point (the cheapest vehicle NFT is only $89) anyone can join the Mars4 project and become a part of the bright play-to-earn future.

Mars4 vehicle NFTs are already integrated into the game, drive across the immersive Red Planet and collect income from the Mars4 project.