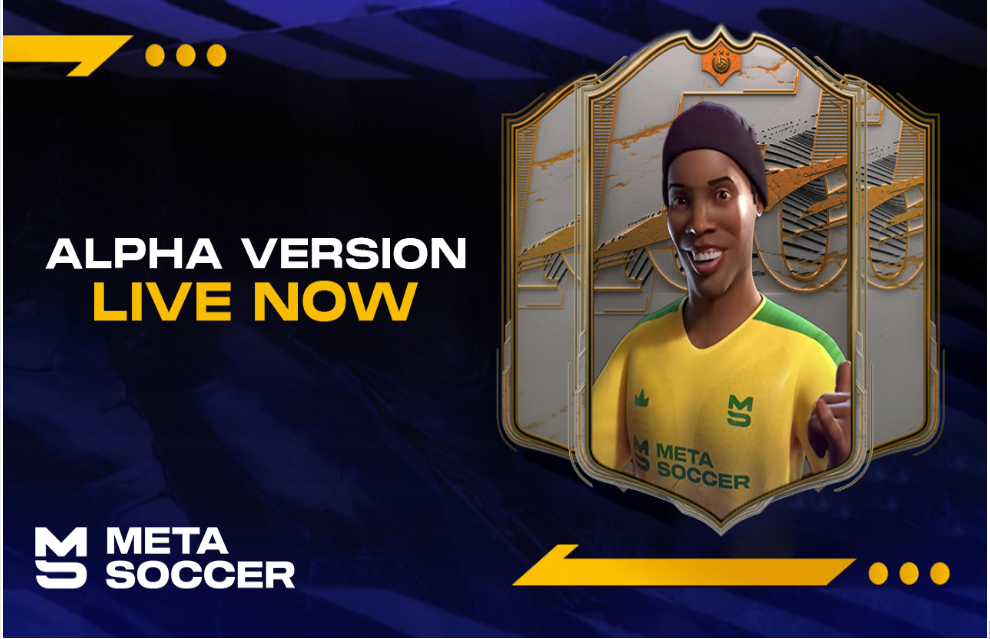 Champions games recently launched the alpha version of their most recent venture MetaSoccer, world’s first soccer metaverse game, a play-and-earn football manager game where players can manage their own clubs and generate income while they play.

Metasoccer hosts major players such as Ronaldinho, Arsenal midfielder Thomas Partey and Aston Villa number One Emiliano Martinez as partners, exclusive and licensed playable NFTs within its game, with many more to come. It will distinguish players based on 4 distinct categories and rarities, based on their career highlights. MetaSoccer also announced a strategic partnership with Brazilian giants Clube de Vasco Da Gama to be a part of the MetaSoccer universe.

The game’s alpha version aims to focus on game development, giving players the opportunity to be involved early within the game, and improve post feedback. Qualified users for the alpha version have participated in the game using the NFTs available to them, train their NFTs and play against the environment and other players.

“This is a new milestone for world football and Web3 – We’re very excited about our alpha launch, and the players and partners we’ve onboarded. At MetaSoccer, we envision a new football category – a football metaverse. MetaSoccer clubs will be able to earn at the same level as a pro club in real world through sponsorships, while all NFT footballers will be a part of the exclusive licensed playable NFT collection” said Patxi Barrios, COO and Founder of Metasoccer.

MetaSoccer’s current stage in the alpha version kickstarted from 24.05.2022, with higher token rewards ($MSU) post validating fully operational reward mechanics for its game! MetaSoccer will distribute rewards at the end of each game, according to the game results. All NFT holders will be able to create line-ups and participate and play in the alpha version.

Patxi Barrios further added, “Since the alpha version launch, MetaSoccer has seen impressive results, with 1610 players who have already earned rewards from the game – and the top score of the game in the last 7 days has been 1,981 $MSC. We’re ecstatic to see the response from our community, and are only excited to see and discover what lies ahead!”

MetaSoccer allows users to scout, train, play with and trade players, and 17,250 NFT football players have been transferred in the market since the alpha launch on 09.05.2022. Next iterations include various improvements within the game and user experience, with modifications in formations, strategy, player substitutions and player rankings.

Metasoccer is a play and earn football manager metaverse on the blockchain, where people can scout, train and trade their players within the metaverse. To participate in the existing alpha version, be involved with the Metasoccer metaverse or find out more information about the project or the $MSC token, visit: https://metasoccer.com