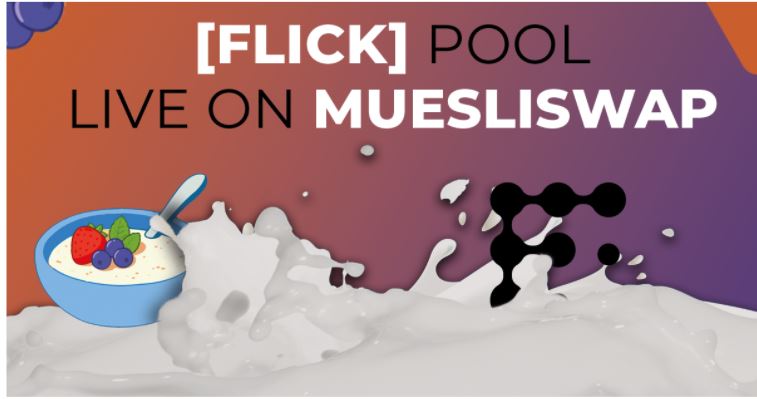 The Cardano ecosystem is brimming with projects that aim to solve many underlying problems within our current society. Cardano has made tremendous progress since introducing itself to the crypto world. With all their hard work on and off-chain Cardano has been able to facilitate the adoption of Crypto in usually underserved communities within Africa. This has provided millions of people with opportunities that will allow them to reclaim control of their finances whilst building much-needed blockchain infrastructures.

For this reason, projects flock to Cardano not only for their meticulous approach to blockchain and decentralization but also for the social impact they are having on global society. This has led to projects such as MuesliSwap and Flickto building on such an inspirational and innovative network.

MuesliSwap launched on Cardano’s main net as the first decentralized exchange. This was a huge milestone for Cardano, MuesliSwap, and the push for decentralization. MuesliSwap has brought the traditional order book model that was used by stock exchanges to the world of crypto, providing people with the opportunity to participate in peer-to-peer trading. The team at MuesliSwap are one of many reasons why the work being done within Cardano’s DeFi ecosystem should not go unnoticed.

In addition to this, we have a project that has decided to take an alternative approach to the use of decentralization. This project is Flickto Media, a decentralized media incubator, whose passion and drive have garnered a lot of interest from those who encompass the same space. Flickto Media is essentially the pioneer of this mission. With inclusion, diversity, freedom, and empowerment embedded into their companies, DNA Flickto Media has begun to establish itself in an industry that is moving at breathtaking speed.

However, two projects that both encompass completely different missions have managed to create a synergetic relationship that they believe will be prosperous for the entire Cardano ecosystem. The formulation of this partnership has provided individuals with the chance to stake $MILK tokens that they hold in their possession to a Flickto dedicated pool. Those who stake their $MILK tokens to the [FLICK] pool will be rewarded with $FLICK tokens in return.

The $FLICK token provides its users with the ability to vote on a wide array of multimedia projects such as; films, short films, documentaries, comic books, NFT projects and more. It also allows people to be eligible for collectible NFTs, mentorship, consultancy, and overall education in business, media, and blockchain. It provides them with the opportunity to gain royalties from successfully distributed media projects, and to become a part of an inclusive community that promotes diversity, equality and digital ownership.

MuesliSwap has seen the value that Flickto wants to bring to the Cardano ecosystem, which is why this initiative was formed. Flickto are in the midst of their ISPO Remastered, which has garnered a huge amount of interest from those within the Cardano Industry. It has come to our attention that they are now one of the most rewarding ISPOs that exist in the entire Cardano ecosystem. Those who decide to become delegates to the [FLICK] pool will receive 0.33 #FLICK for every ADA they stake, now that is generous if you ask us. However, Flickto has now increased its rewards and this will be effective at the start of EPOCH 329.

The push for global decentralization will be an obstacle within itself, however, with major partnerships developing it is only a matter of time before it becomes a reality.

With WAVES skyrocketing to a new ATH, is altcoin season around the corner