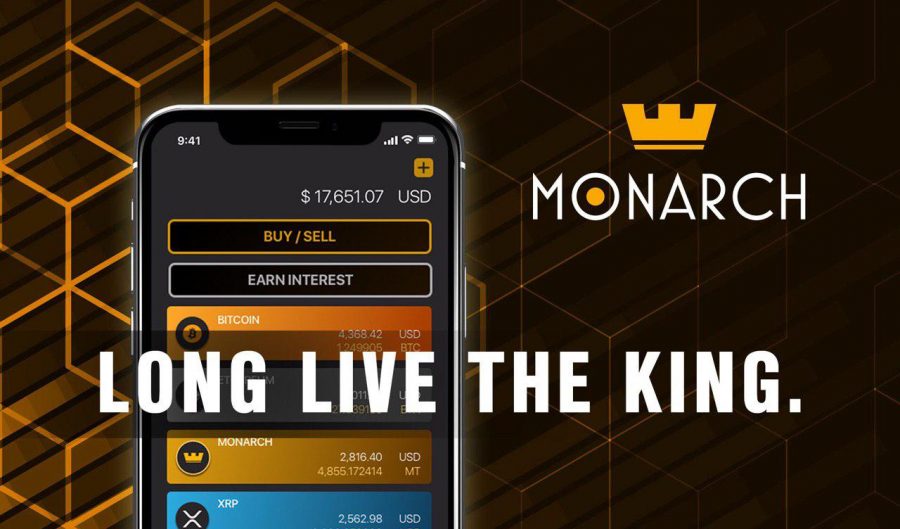 The most relevant news in the crypto sphere during the first quarter of the year has been around hacks, with thefts that represent more than $16 million dollars [Cryptopia, January 13], as well as “lost” funds due to human error [Coinbase, 7 March]. So, apparently, the better solution seems to be the dedicated Hardware Wallets. But is it really?
After trying several options, one caught our eye: Monarch, an application that offers the best of several worlds, in addition to a sleek interface and a user base of +200K.
The wallet for kings
The concept of Monarch is reflected by its name: be the king or queen of your money. A financial solution, anywhere in the world, right in the palm of your hand.
The application is easy to install and can be found in the most important App Stores. The rest of the process is almost intuitive. Monarch generates 12 words to use as a seed, which gives you access to your account, allowing to restore the wallet in case you change devices, this seed will be the user’s responsibility since the developers behind the app do not store any of the user’s information due to its Decentralized nature.

Once all this is done, Monarch will ask you for a 4-digit pin, a solution that may feel odd, but the team behind the app has mentioned that they expect to introduce biometrics in the app within a month.
Be your own bank
We depend on external criteria for how and when we access our assets, sometimes, even with transaction limits in between.
With Monarch, this works completely different. The advantage of having it in your pocket makes possible to do any kind of transaction you want.
Here are no worries about a central point of failure, someone losing your keys or disappearing. With Monarch, the responsibility will be yours alone.
As a little bit of context, this year, on February 4, the owner of the Canadian exchange QuadrigaCX passed away, taking with him the keys of $150 million dollars in crypto. The investigation is still ongoing in order to recover the money, with a lot of people speculating that the crypto is on somebody else’s hands by now.
Real uses in daily life
One of the most promising offerings is for your crypto to truly be useful as a monetary value. With Monarch, you will be able to make monthly payments [subscriptions], pay businesses and earn returns for the cryptocurrencies that you hold in the wallet.
According to Monarch, the interest rates on the accounts are expected to be between 3% and 7% annually, and it will depend on the amount of collateral deposited. This can be possible thanks to the integration of Celsius Network and is live now.
One of the advantages that we liked the most is the option of making transactions through users names, instead of the alphanumeric addresses that are almost impossible to memorize.
In addition, the Monarch add-on for merchants is integrated into an e-commerce content management system, that allows any business to accept crypto and get paid in fiat thanks to the internal exchange, giving access to a real-time network of payments with low fees.
Finally and currently with up to 5.5% lower fees than Coinbase, the option for buying crypto with any credit card or bank account could be a catalyst to promote mass adoption. Having traditional banking and crypto merged together will give more confidence to those that are still hesitant of entering the market.

A friendly and interactive interface
As in any investment, getting into crypto requires to stay informed, a hard task when there are hundreds of news sources out there, Monarch took this into consideration, and in order to give more control to the user, they included a feed with the latest news in cryptocurrencies, from reliable sources; as well as a section to watch, in real time, the changes of the market and a portfolio option for the user to register the cost/moment in which they enter an asset.

Who takes the crown?
After telling you all about Monarch, you may be asking: how does it stand against what we already use? We have compared it with the following categories:

[BRD and Uphold were used as reference]. The majority of solutions in this category support fewer cryptos or the ones they do, are not at the Top. In contrast, Monarch allows the use of Bitcoin [BTC], BitcoinCash [BCH], Ethereum [ETH], XRP, Stellar [XLM], Monarch Token Promo [MTP], TrueUSD [TUSD], GoChain [GO] and all the ERC-20 tokens.
The wallets that are more decentralized suffer from prolonged loading times, which gives the impression that the development is still in its early stages, fact that leaves many doubts about the security of our funds, because they do not have security options like fingerprint scanner; in the case of centralized wallets, which offer benefits such as interests, there will always leave the doubt of who is the real owner of the crypto, since the user doesn’t have the access keys.

This is one of the most popular solutions out there for those who want maximum security, but it’s limited because it depends on the physical location of the device/wallet, becoming impractical since we rarely carry the device with us. Benefits like exchange, payments, interests, and subscriptions are out of the realm of possibilities [points to Monarch], the cryptocurrencies are simply there, frozen. Another detail is the relationship you will have with the manufacturer of the device: for how long will it be around?
With Monarch, any old phone can be transformed in cold storage by downloading the app and make sure that the device doesn’t have a SIM card and turning off the Wi-Fi and Bluetooth.

They are practical for having small amounts and doing day trade, but this year has made us more aware of their risks. Bitfinex, LocalBitcoins, Coinmama and Mt. Gox, among others, are still under investigation, seeking to recover millionaire losses, leaving the clients waiting in hope to recover their money. By now, you are probably already familiar with the phrase: Not your keys, not your crypto.
In an update schedule for the next month, Monarch will have its own built-in DEX [Decentralized Exchange], giving the users the ability to swap tokens in their portfolio.
A wallet that saves you time and gives you more security
In conclusion, Monarch demonstrates a very solid offering compared to other wallets that still look like developing projects, which generates some paranoia. In contrast, Monarch has made an outstanding job compared with other projects that raised up to an $800 million dollar market cap or more just to take off, and are not half as good.
Although it is not at its maximum potential yet, in its current state, offers much more than its competitors. For now, the features related to fiat and interests are only available in the United States, as well as domiciled payments, albeit Monarch plans to complete its offering for the rest of the world very soon.
We hope the developers increase the security to enter the application and that it soon gives us the option to choose the language of our preference. Meanwhile, we will enjoy seeing it settle in the community for what it is worth.
You can download Monarch now, where ever you are, and be part of their token airdrop.
For more information and download sites:
Official website
Wallet link
Apple iTunes Store
Google Play Store
Youtube channel