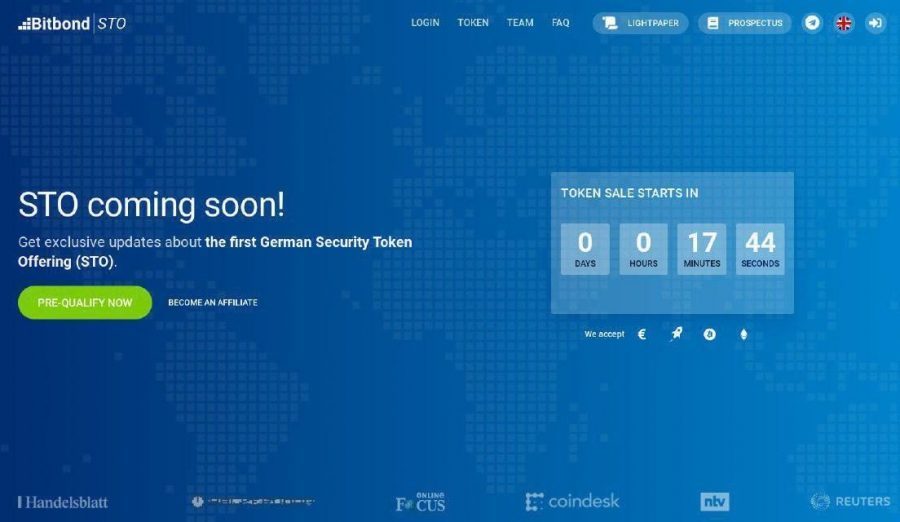 Over the last decade or so, the world has witnessed a steady growth in the popularity of the blockchain technology and the cryptocurrency market that it has enabled. Consequently, there have been significant disruptions in most global or local industries, in general, and in the finance industry, in particular. Especially over the last two years, traders in the market have made unprecedented gains, both by transacting in cryptocurrencies and by lending in the same.
Yet, despite the pros of this boom, investors have been suffering from the perils of the traditional ICO-based approach to investing in the market. Moreover, in many ways, the ability to make adequate gains from their investments has been limited to the big fishes in the industry.
In order to mitigate these issues, Bitbond, a German FinTech startup has come up with the method of Security Token Offering (STO) as a replacement of the Initial Coin Offering (ICO). Such a transformation has been highly praised both within and without the industry, including the independent investment report by the Kintaro Capital.
A Brief History of Bitbond
Since its inception in 2013, this Berlin-based FinTech startup has established a formidable name for itself in their capacity of becoming the first global blockchain lending platform. Apart from the efficiency of their innovations, the firm’s success has been largely propelled by the substantial and steady investments by reputed concerns like Point Nine Capital and Sky Level Group.
As of now, Bitbond has already sanctioned more than 3000 loans in over 80 countries. Moreover, the startup has distinguished itself from most of its peers by securing a BaFin license and by functioning under the regulations of this financial institution. Owing to this sanction, Bitbond has significantly strengthened the decentralization drive which is one of the primary motives of the blockchain industry.
Having done all of that, the company is now in a position to launch its STO, which would be the first-of-its-kind of ventures in Germany. The said launch is scheduled on the 11th of March, as per the company’s announcements.
The Technological Shift
In the initial days of its functioning, Bitbond was working within the folds of the traditional Bitcoin blockchain. However, this had serious ramifications which significantly pulled the process downward owing to its higher transaction time, as well as, the costs for the same.
As a solution for this problem, Bitbond embraced a technological shift towards the faster and more efficient Stellar blockchain. However, that was not all.
As the Kintaro report pointed out, Bitbond’s AI systems have significantly heightened the transparency offered to the investors by making use of the EURT coin by Tempo. The functioning of Bitbond involves a conversion of the investor’s crypto into EURT and then back at the time of lending the same to the medium-sized investors or SMEs.
Security Token Offering
Being known as the BB1, the security tokens may be regarded as an actual asset backed by a legal sanction, as well as, a security framework. The offering, starting from the 11th of March, has been broken up into phases, each of which is associated with a degree of discounts being offered to the investors. Although the regular price of the token is € 1, a 30% discount is being offered for investments made in the period until the 1st of April.
The token may be bought using a variety of currencies ranging from Euro [SEPA], Bitcoin [BTC], Stellar [XLM] to Ethereum [ETH].
A crucial ground-breaking aspect of the STO is the firm’s promise of 1% interest to be paid to the investors in each quarter of a year. After the termination of the token’s maturity period of 10 years, it would be bought back at the regular price of € 1.
Although 1% apparently seems to be a meager amount in itself, it’s significance is to be understood in relation to the normal interest rates offered by savings banks in Europe.
Apart from this, Bitbond has taken care to allow optimum ease of access to its investors by providing for a free Stellar wallet for its investors at the time of purchasing the token. Obviously, existing stellar wallets may also be used for this purpose.
The STO and SME Lending
Bitbond’s vision is to utilize a majority of the fund raised through the STO to provide loans to SMEs worldwide. According to the Kintaro report, this drive would lead to a € 1 Billion boost in the company’s annual loan sanctions by the end of 2022.
Conclusion
In an attempt to do away with the perils of the ICO and to restore the crypto market’s credibility, Bitbond is transforming the lending industry through its Security Token Offering and by implementing the Stellar blockchain. This drive has been highly praised vis-à-vis an independent report by Kintaro Capital, as it is expected to not only strengthen the industry but also heighten the transparency of the same. In multitudinous ways, this is very much the beginning of a new era in the crypto and blockchain industries.

Auctionity Changes the Face of the Global Auction Industry

How EOS Could Soon Become the #1 Blockchain Dapp Platform