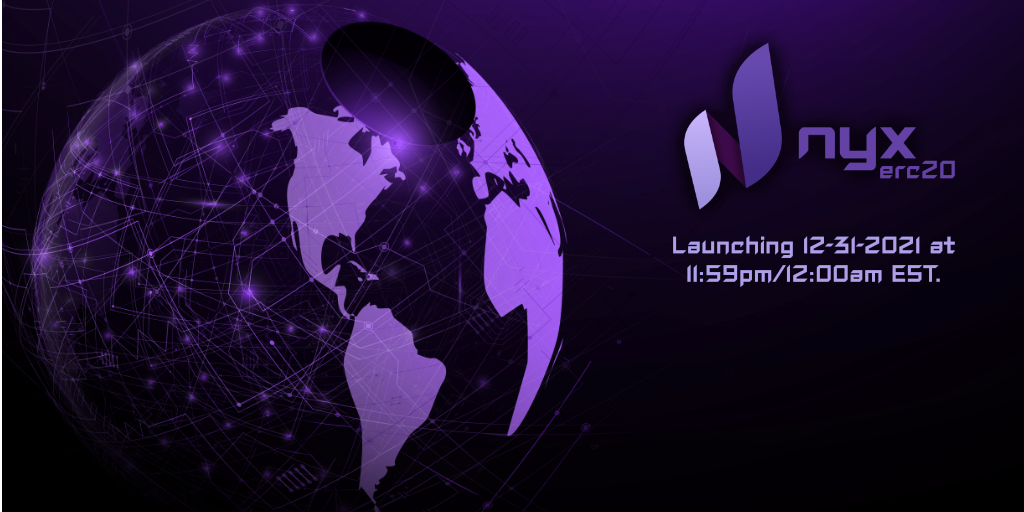 What is NYX Token (NYXT)

NYX Token, named after the goddess of night, is a digital currency created with ERC 20, an Ethereum standard. NYXT will be launched on UNISWAP on December 31, 2021, at midnight Eastern Standard Time (the start of the New Year). NYXT is designed to be as simple as possible with control to be in the hands of the investors.

After years of friendship, our NYXT development team shared some extreme highs and lows (for lack of a better phrase) with each other after investing in cryptocurrency. As time progressed we saw Ethereum based project after project released with many different utilities. Some of these projects stayed true to their word, others not so much and well, some of them were just flat out rug-pulls.  Having been victims of some of the rugs, as well as investing in tokens that didn’t stick to their road maps, we decided to create NYX Token.

We plan to keep this as simple as possible, but with a few surprises along the way. This token has not only the investor in mind, but also many others that will benefit from the utility of this coin.

No Taxation Without Representation

NYXT transactions will have a tax of 8% divided as follows:

2% to a charity wallet for an MS Foundation (Multiple Sclerosis)

2% will be redistributed to our loyal holders

1% will be burned to the Black Hole Wallet

1% will go to a Marketing/Donations wallet.

Recently, one of our Developers was diagnosed with Multiple Sclerosis, a potentially disabling disease of the brain and spinal cord (central nervous system). In MS, the immune system attacks the protective sheath (myelin) that covers nerve fibers and causes communication problems between your brain and the rest of your body. Eventually, the disease can cause permanent damage or deterioration of the nerves. To support those battling this disease, he decided 2% from every NYXT transaction will be donated to a Multiple Sclerosis Foundation in order to help fund research and support to their cause.

Another one of our Developers is a former Soldier of the US Army, having served 6 years of enlistment and one tour in Operation Iraqi Freedom in 2005/2006. After returning home physically uninjured, the same couldn’t be said about his mental health as he was diagnosed with PTSD. It was no doubt at the top of his list to donate 2% of every NYXT transaction to help Veterans in need physically, mentally, and financially.

In addition to these great causes, we would also like to recognize our investors and with that said, 2% of every transaction will be evenly divided among you all, as a way of showing our gratitude for those of you who are here to grow with us.

1% from each transaction will automatically be sent to a “dead wallet” also known as the Black Hole Wallet. No one has the access key to this wallet, essentially creating a reoccurring burn by removing these tokens from circulation forever.

The final 1% will go to directly to an NYXT marketing and charity wallet. If and when drawn from, the funds will be used solely for the purpose of advertisement and expansion of our community and number of holders, or for charitable events that our team deems suitable.

To finance this project, we the developers will be providing 100% of the initial marketing funding as well as the initial liquidity and it will be locked for 24 months at the time of launch. This decision was made to benefit our investors and eliminate any possibility of presale “whales” and to keep this launch as fair as possible for everyone. Also, this 24-month duration was decided to instill the idea that this project is here long term.

The NYX Token will be launched on December 31, 2021, at midnight EST (New Year). We have deployed 1 quadrillion tokens and will release percentages of them to multiple exchanges, beginning with UNISWAP at launch.

To keep this launch as fair as possible, our team members who wish to invest in NYXT, like anyone else, will have to purchase tokens after the time of launch. NO TOKENS WILL BE SET ASIDE FOR ANYONE, INCLUDING ALL OF THE DEVELOPMENT TEAM MEMBERS.

The Future of NYXT

The future of this token depends on the efforts of the development team as well as the longevity of our investors. We as a team will strive to give this project our all. We have surprises in addition to our Roadmap checklist to share with you along the way… including exclusive NYXT NFT collections.

Visit our website for more information and to decide if this is the right investment for you.

AscendEX’s letter to its global community