Algorand is an open-source blockchain that enables improved scalability without compromising on the fronts of decentralization and sustainability.

The project was founded in 2017 by Professor Silvio Micali, a computer scientist from MIT.

The blockchain deploys a Pure proof-of-stake (PPoS) consensus protocol that selects validators at random as per the weight of their staked ALGO coins.

Interestingly, the key to Algorand's scalability comes from its Pure Proof of Stake consensus mechanism. This protocol allows it to process many transactions quickly without sacrificing decentralization.

Proof of Stake (PoS) blockchains are practically scalable but often at the cost of a small number of validators. These validators can have large stakes and can dominate block approvals. Then how does Algorand solve this problem?

Unlike PoS blockchains, Algorand doesn’t require a minimum stake. This makes it feasible for an average user to take part in the validation process. Thus, the network's security is theoretically more decentralized than other mechanisms.

In stepping up its efforts to solve the blockchain trilemma, Algorand could set the stage for a reliable, fast, sustainable blockchain in the coming times.

ALGO is the native coin of Algorand's blockchain. Its primary use cases lie in staking, governance, and paying transaction fees on the blockchain. The coin has a maximum total supply of 10 billion to be distributed by 2030.

After the launch of its Mainnet in June 2019, its native crypto ALGO has witnessed a roller-coaster-like journey while depicting a high correlation with Bitcoin.

After starting 2020 on a bullish note, the $0.25-$0.28 support range set the foundation for ALGO's buying renewal. As a result, the coin registered consistent gains for the coming two years until its November 2021 ATH. Owing to a 78-80% correlation with the king coin on average, ALGO plunged alongside the broader market fallout.

This descent has propelled a retest of its multi-year support in the $0.28 zone. With the macroeconomic conditions not being favorable for risk assets in the market, the sellers would likely aim to constrict the buying rallies in the short-medium term.

Prospects of ALGO tapping into its potential

In September last year, the blockchain announced the launch of the Algorand Virtual Machine. In essence, it was a layer-1 protocol upgrade designed to enhance decentralized app scalability for developers and organizations. Moreover, it also enhanced transaction finality speed.

Recently, Algorand also introduced cross-chain communication and transaction speed improvements with the latest upgrade to its protocol. It announced the implementation of State Proofs. State Proofs enable Algorand's blockchain to interoperate in a decentralized way with other blockchains.

(From a security POV: it will prevent quantum computers [when they may emerge] from retroactively forking the chain.)

Most importantly, this upgrade increased Algorand’s processing speed from 1100/1200 to 6,000 TPS.

As a consequence of various developments since last September, ALGO’s development activity has been on a consistent uptrend for over a year now. The price, however, did not seem to be sensitive to this metric’s movement owing to the broader investor sentiment.

Furthermore, the blockchain aims to achieve immediate transaction finality. By leveraging the 'block pipelining' concept, Algorand could increase the TPS to 46000. The users should keep a close eye on these updates to gauge improved social sentiment.

The momentum continued as the network witnessed the introduction of Algomint, the next-generation DeFi infrastructure. This project bridged popular assets to and from other blockchains to the Algorand blockchain. By striving to solve the interoperability problem, Algomint could further bolster the network's DeFi growth.

In the meantime, Algorand marked a robust growth in its Total Value Locked (TVL) over the last year. A consistent growth on this front unveiled the underlying uptick in the users' interest.

Algorand assisted FIFA in developing a “digital asset strategy,” by simply utilizing its blockchain for building non-fungible tokens (NFTs). FIFA recently launched its digital collection powered by Algorand. This opens gateways for fans to have an opportunity to actually 'own' the greatest moments in football.

Despite the above developments, Algorand marked a consistent decline in the network's total number of active users. Not surprisingly, the broader market crash has led to a solid drop in active addresses as most of the investors liquidated their holdings. 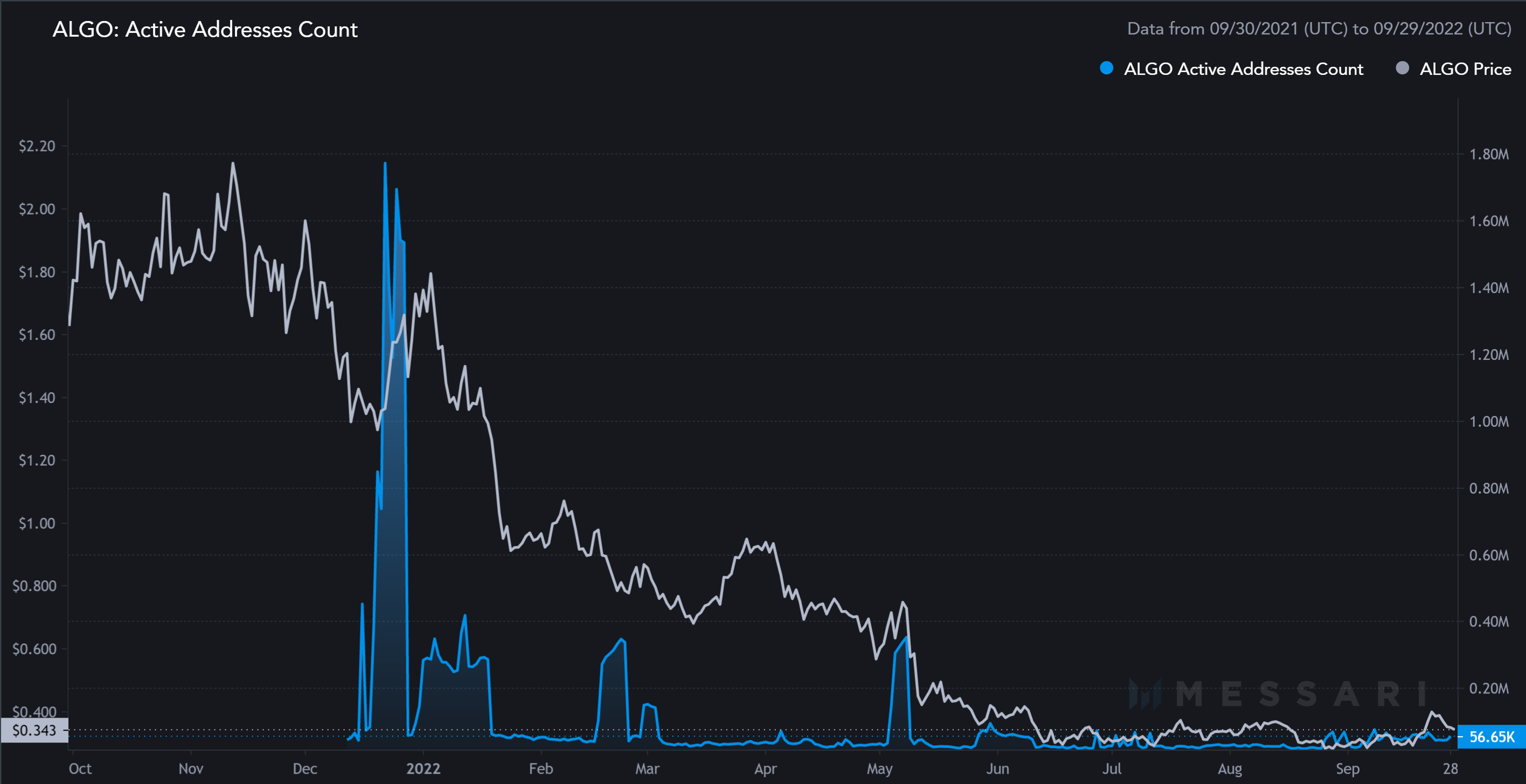 To top this off, the broader sentiment only seemed to worsen after the deteriorating macroeconomic conditions. But should the wider conditions improve, the network seemed to have made enough progress on its development side to accommodate a potential surge in demand.

ALGO saw exponential growth on its charts during 2020-21. The buyers induced a rally above the 20 EMA (red) and the 50 EMA (cyan) and flipped them to support. Consequently, the coin touched its multi-yearly highs on 18 November 2021 in the $2.9 region.

After the broader market pulldown, ALGO's decline saw an over 90% depreciation as it fell toward the $0.25-$0.28 support range. The token could now seek to rebound from its multi-yearly lows as the decline has plateaued and found a break above the current pattern.

This bearish rally entailed a descending broadening wedge on the weekly chart. The coin could see a streak of green candles as it snapped the constraints of its long-term trendline resistance. But it was yet to prove its buying edge as the price struggled to jump above the 20 EMA.

An eventual break above the $0.39 resistance and the 20 EMA could pave a path for near-term growth. In this case, potential targets would lie in the $0.59-$0.65 range before a likely reversal.

However, a break below the $0.28 baseline would reaffirm the bearish bias while propelling the coin to test the $0.202 support before a bullish revival.

The Relative Strength Index (RSI) exhibited a vigorous selling edge after consistently hovering in the bearish region since January 2022. A potential break above the 43-mark resistance could affirm chances of recovery in the coming times.

Moreover, the MACD lines depicted a slight increase in buying power but they were yet to cross the zero mark to confirm a change in momentum.

Should you consider buying ALGO?

Additionally, Its partnership with FIFA and Napster over the last few months has further reaffirmed the network's capability to create useful utilities in sports and music.

With the Federal reserve alongside prominent European central banks increasing interest rates, the broader conditions seemed dicey. The buyers should look for a potential close above the 20 EMA barrier on the weekly timeframe to gauge its potential for the coming months.

According to our analysis in the short term, Algorand price prediction for April 2023 shows the average price of ALGO at $0.13 and the highest possible price for April 2023 would be $0.13.

Further, according to our analysis in the long term, Algorand price prediction for August 2023 shows the average price of ALGO at $0.15 and the highest possible price for August 2023 would be $0.16.

Algorand price prediction April 2023: Algorand’s price for April 2023 according to our analysis should range between $0.12 to $0.13 and the average price of ALGO should be around $0.13.

Algorand price prediction August 2023: Algorand’s price for August 2023 according to our analysis should range between $0.14 to $0.16 and the average price of ALGO should be around $0.15.

Algorand price prediction September 2023: Algorand’s price for September 2023 according to our analysis should range between $0.15 to $0.17 and the average price of ALGO should be around $0.16.

Algorand price prediction October 2023: Algorand’s price for October 2023 according to our analysis should range between $0.15 to $0.17 and the average price of ALGO should be around $0.16.

Algorand price prediction November 2023: Algorand’s price for November 2023 according to our analysis should range between $0.16 to $0.18 and the average price of ALGO should be around $0.17.

Algorand price prediction December 2023: Algorand’s price for December 2023 according to our analysis should range between $0.16 to $0.19 and the average price of ALGO should be around $0.18.

Algorand’s long term Price Prediction below is a look at ALGO’s future prospect with regards to price. Algorand was last seen at $0.28, with a market cap of $2,016,776,685 and trading volumes of $205,631,747. ALGO’s price prediction is possible by analyzing historical price action, current developments and social sentiment from the community.

What is price of Algorand as of today 7th February 2023?

Is ALGO a good investment?

Investing in Algorand, ALGO will purely depend on your personal risk appetite. As you can see over the past 24 hours Algorand’s price has witnessed a 7.69% increase and over the past 30 days Algorand has increased by 44.11%. So it all depends on if this investment will hit your trading goals.

How high can Algorand’s price go this year in 2023?

According to our latest Algorand Price prediction for 2023, ALGO should vary between $0.21 and $0.14 Please keep in mind that the crypto market is very volatile and this Algorand price prediction does not account for extreme wild swings in price.

How much will Algorand be worth in 2023?

How much will Algorand be worth in 2024?

How much will Algorand be worth in 2025?

How much will Algorand be worth in 2026?

How much will Algorand be worth in 2027?

How much will Algorand be worth in 2028?

How much will Algorand be worth in 2029?

How much will Algorand be worth in 2030?

How much will Algorand be worth in 2031?

How much will Algorand be worth in 2032?

How much will Algorand be worth in 2033?

How much will Algorand be worth in 2034?

What was the highest price of Algorand?

The highest price for Algorand was recorded in 20th June 2019 during which ALGO hit an All Time High of $3.56

What is the price of 1 Algorand?

The price of 1 Algorand according to current market rate is $0.28