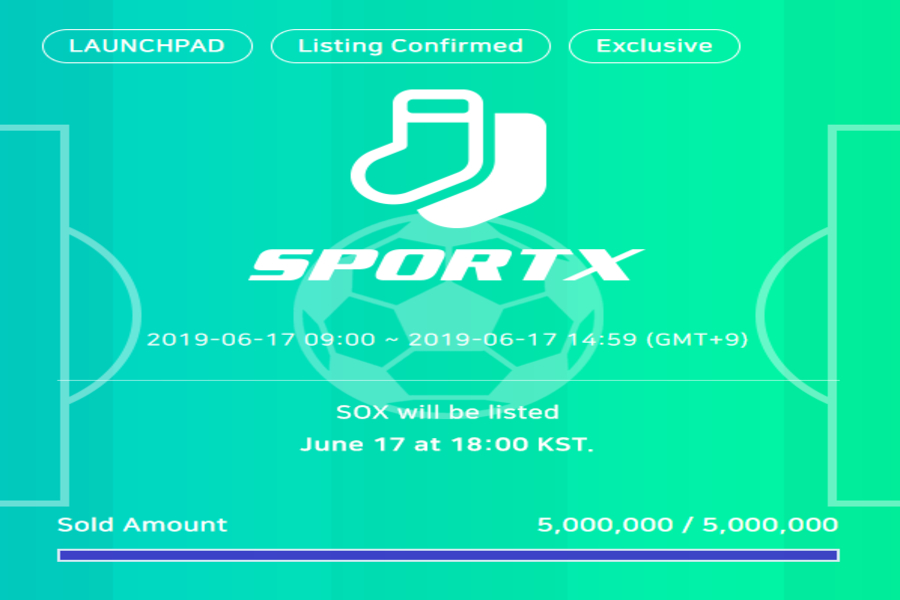 Boltt Coin IEO was a resounding success with both rounds selling out and setting the stage for Round 3.
ProBit Exchange made a major splash with the resounding success of their June 17 Launchpad Premium IEO debut for SportX, a digital sports IP platform backed by distinguished athletes such as Luis Figo, Roberto Carlos, and Javier Mascherano. Probit Exchange managed to score a rare allocation and sold out $50,000 within minutes.
SOX mooned 3x within 2 days, establishing Probit Exchange’s premium launchpad as a top destination for IEO services. The Launchpad same day listing policy for increased liquidity drove the price of SOX as it quickly climbed the charts and reached nearly 31 KRW at one point, marking a three-fold increase in price.
With the price holding steady at around 27 KRW at the time of press, investors have lauded the top IEO platform for a strong ROI on their initial investments.

Caption: Luis Figo, ex-Real Madrid winger, is the ambassador of SportX and is seen here with Ronald Chan, Director of Partnerships of Probit Exchange. | Source: Probit 2

Luis Figo, ex-Real Madrid winger, is the ambassador of SportX and is seen here with Ronald Chan, Director of Partnerships of Probit Exchange.
Ronald Chan said,
“Probit has carefully reviewed over 200 projects before selecting SportX as the first IEO to be featured on Probit Launchpad. SportX has a great business model and has strong partnerships with other established businesses so we are glad to have them as our partners”.
Following up on the major splash made with their successful Launchpad debut, ProBit Exchange held IEO for social health gamification platform Boltt Coin, which delivers a variety of physical challenges and events aimed at incentivizing users to endorse an active lifestyle and also provides a well-developed marketplace for token expenditure.
Round 1 quickly sold out in all of 1 second, prompting a successive launch for Round 2 three hours following the record-setting sellout. 2 seconds later, Round 2 was also completed, marking a staggering $278,000 raised in just 3 seconds for Boltt Coin.
With careful consideration of the massive demand that saw a total of 556,000 BOLTT tokens sold, a Round 3 has been scheduled for June 26, 15:00 KST. [Korean standard time]
Boltt Coin has already established a comprehensive framework to dominate the Asian market with a top-rated fitness app complemented by wearables and is currently the third-ranked dApp. With a strong local presence in the massive Indian market, Boltt Coin has turned its attention to capitalizing on Asia through major partnerships with top VC backed Japanese blockchain investment fund BCryptos as well as Klaytn, a subsidiary of top Korean conglomerate Kakao.
To further complement these strong partnerships, the Boltt advisory team also boasts varied, extensive experience in major global brands through individuals including Former Columbia Pictures Executive Vice President Teddy Zhee and IDAX Singapore COO Benjamin Wei Jie Tang.
Top ranking cricketer Ravindra Jadeja has been onboard as a significant stakeholder along with the introduction of a fantasy platform called Boltt11 which will tap into the lucrative fantasy sports markets for both cricket and soccer enthusiasts.
Following the resounding success of their sellout Launchpad IEO, tripling the initial price of SOX tokens through same-day listing, and a thundering, record-setting IEO pace to raise $278,000 in just 3 seconds, ProBit Exchange will be looking to complete the Boltt Coin IEO trifecta and continue their IEO dominance as one of the most highly sought out IEO global platforms.
Join Boltt Coin Round 3 here.
About ProBit Exchange
ProBit Exchange has completed almost 60 rounds of IEO and has amassed a solidified reputation over a short 6-month span since the startup’s launch.
They have conducted multiple rounds of sell-out IEOs and raised millions in the process while refraining from any form of wash volumes or misleading figures. Please visit the IEO page to view the simple, efficient user interface.
ProBit Exchange has also introduced new features such as an ongoing trade mining and stake mining beta service, PROB staking for users to earn discounted trading fees, a referral program that provides 10-20% in further transactions fee savings, as well as a newly released app available on Google Play.
ProBit Global
ProBit Korea
IEO at ProBit Exchange
Many projects place their trust in ProBit Exchange’s IEO platform as we are a one-stop exchange for:
1) Fund-raising – Stellar fundraising track record including over $500,000 raised over three rounds for Spin Protocol, $53,000 in 6 seconds for LINIX, and $60,000 in 11 seconds for Steemhunt.
2) Listing – Instant liquidity against fiat and crypto pairings. Korean Won and USDT. Mild MM included
3) Marketing – Comprehensive services including marketers, marketing agencies, social media marketers and news agency on retainer. View a sample marketing campaign that we conduct for IEO.
Interested projects should fill up this form to start the due diligence process.
Related Topics:
Up Next