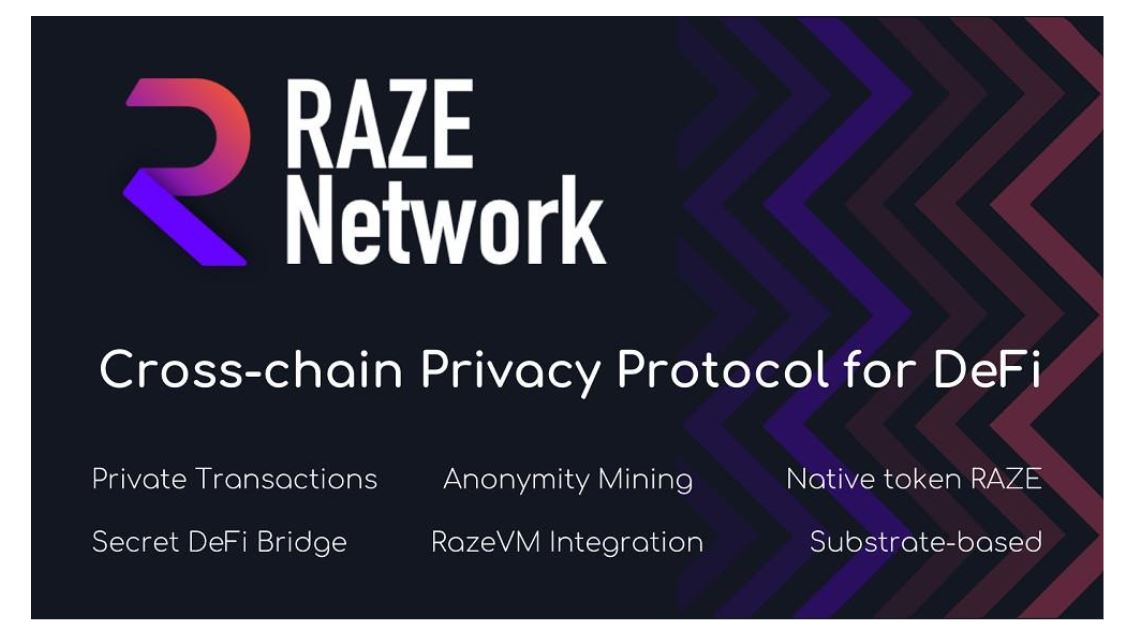 Raze Network, a Substrate-based platform for Privacy, has successfully completed its triple IDO on Pools, DuckStarter, and Bounce. Earlier, the team has raised $2.2 million in seed and private funding rounds, confirming this privacy-oriented approach’s viability. The subsequent Balancer and Uniswap LBP listings also attracted. The release of the roadmap is the current point of focus.

As a second-layer anonymous payment module for the DeFi ecosystem, Raze Network plans to become the go-to. As the DeFi industry grows, expands, and accelerates, demand for privacy-oriented solutions becomes more outspoken. As a Substrate-based cross-chain privacy protocol for the Polkadot Ecosystem, Raze Network provides end-to-end anonymity to all DeFi solutions built on this technology stack.

As the team has now concluded its three IDOs successfully, it confirms the vision of applying zkSNARK technology to build a second-layer decentralized anonymous module. Enabling cross-chain privacy is a feature many users will benefit from in the future. Privacy-preserving payments are of great interest to users, especially when the privacy technology exists at a protocol level, rather than being opt-in.

“We are excited to see this level of support from established ecosystem players,”. “Since DeFi took center stage, demand for privacy became stronger than ever owing to issues such as front-running and MEV. Our focus on cross-chain assets is key to bridging liquidity from all transparent blockchains.”

“We believe Raze Network is poised to dominate the privacy niche in crypto,” said the AU21 Capital team. “Bridging liquidity across all transparent blockchains is key to making privacy alluring to the average crypto user. With time, this approach may just make private crypto a mainstream phenomenon.”

The completion of the Balancer Liquidity Bootstrapping Pool event has spotlighted Raze Network and the vision the team wants to roll out even further. Every Balancer Liquidity Bootstrapping Pool event attracts tremendous attention, and the concept has been embraced by all great crypto projects in recent history. Launching tokens with liquidity generation and price adjustment is an essential part of fueling fair and transparent price discovery.

Thanks to the strong partnerships, the ongoing Raze Network NFT campaign, and the roadmap milestones to be reached, the future looks bright for Raze Network. The team will continue to work on the Token and Dapp source code, liquidity reward, protocol, and product launch, and bridge to DeFi protocols over the coming months.

Raze Network is a Substrate-based cross-chain privacy protocol for the Polkadot ecosystem. It is built as a native privacy layer that can provide end-to-end anonymity for the entire DeFi stack. The Raze Network applies zk-SNARKs to the Zether framework to build a layer-two decentralized anonymous module.

It will then be imported as a Substrate-based smart contract. Raze Network’s objective is to enable cross-chain privacy-preserving payment and trading systems while protecting the transparency of your assets and behaviors from surveillance.

Beyond Finance lists on AscendEX