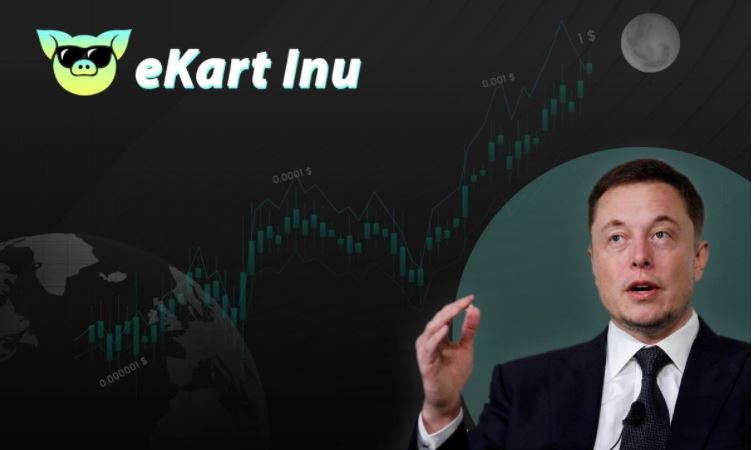 Ekart INU has been the talk of the town since before its launch. Within just a few weeks of launch, Ekart INU has proved to be everything they claimed. They have proved to be the boss in the industry and have completely owned every trading talk one-sided. Ekart INU is considered the most “genius” and “strategic” crypto-coin ever. This time we have something bigger and better about Ekart INU.

Ekart Inu, trading under the ticker EKARTINU, is now the 6th largest crypto in the world.

Elon Musk, who was responsible for the surge in Dogecoin prices earlier this year, will probably give his blessing to Ekart Inu as well. Experts say that the popularity of Ekart should not be ignored, since it reflects the behaviors of a new, growing class of cryptocurrency traders.

Ekart INU has reached 940k+ Account holders and over 180k+ telegram families, and it will reach a 100x high price when the token goes to list in exchanges. Ekart Inu has made the impossible possible.

The most talked-about Cryptocurrency token, Ekart Inu (EKARTINU), surged more than 10% in August, after presale phase II  on its platform. Now,  Bitforex exchange has listed Ekart Inu tokens. Trading will be available on Oct 1st, 2021, in trading pairs with BTC, ETH, USDT, BNB, and MATIC. Deposit entry and trading will be available immediately after the completed the presale.

At the same time, It will definitely list in Tier 1 exchanges like Binance, Houbi, and Okex in the future.

Ekart Inu was launched on 2nd Aug 2021, Ekart Inu is not just a token but also a token claimed higher than ever. Ekart INU was launched with a vision of revolutionizing the current trends and patterns.

Within almost 2 months they have achieved almost everything they listed. They have been the talk of every exchange platform for quite a while. The token is focused on the community and opens up new opportunities for holders to earn money. Ekart token holders can earn income not only from staking, or trading but also from simply exchanging the token in an e-commerce platform.

Ekart Inu is officially listed in Bitforex, XT, Hotbit, Probit Exchanges. According to the sources, Ekart Inu is all set to come into the market in the first week of October. Bitforex Exchange said in a tweet that it is like the biggest and most valuable token ever in 2021 of all Inu’s and definitely gives you amazing returns.  Initially, the coin came as a token and successfully reached many investors and as a result, now it will come as a coin which is going to be listed on 1st Oct 2021. Users can trade the Ekart Inu at Bitforex, Hotbit,  Probit , Coinsbit, Azbit, Indoex, p2pb2b,XT.com, Pancakeswap,1inch,Quickswap . After the presale is closed, the trade will be live.

The total volume of EKART Inu tokens reached 1 quadrillion tokens. Even more surprising, the project burned 83% of the tokens during the pre-sale and gave another 2% to Vitalik Buterin as a donation to help in the fight against Covid-19. Another 2% of tokens are supposed to be distributed on airdrops and campaigns in social networks, and 6% will remain for payments on bills.

The remaining 7% is distributed over the four phases of the EKARTINU token presale. The cryptocurrency market is preparing for a bull run, and EKARTINU is preparing to bring unprecedented profits to its investors. Undoubtedly, it can become the best meme token of all time.

According to experts, Ekart INU will hit the $1 level soon as the price has been showing a great momentum, steadily moving up since the launch to attract more buyers. Based on our prediction, the Ekart Inu price prognosis for 2021 is $0.008 by December 2021. The revenue is expected to be around +260%, and in a period of just 6 months. It’s possible that Ekart Inu can reach a dollar in value soon. Even the most optimistic long-term crypto price prediction sees it valued at less than a cent in seven years from now.

Ekart INU is making it transparent for the account holders, they have given all the power in the hands of their customers to decide the price at each share. Since the launch, Ekart Inu has not seen any low, and it seems like it won’t see it ever. Ekart INU has made it easy for anyone and everyone to trade, sell and buy crypto-currency and build trust over crypto markets.