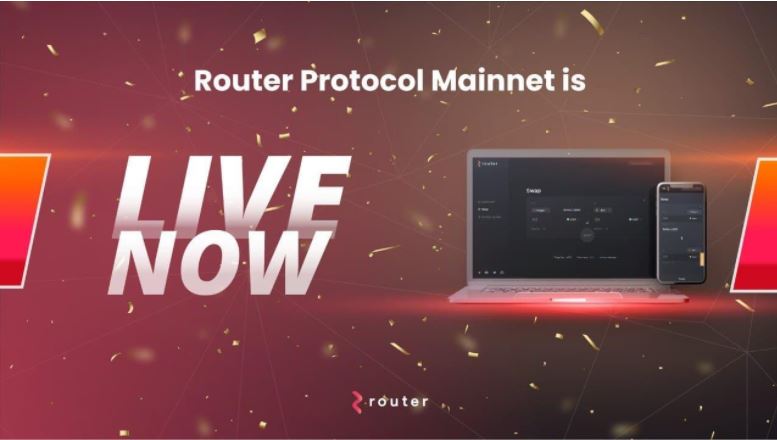 Cross-chain communication infrastructure project, Router Protocol, announces the launch of its mainnet, a few weeks after a successful funding round in which Router raised over $4 million from marquee investors including Coinbase Ventures, Alameda Research, QCP, Polygon, and Wintermute. The mainnet launch follows a successful period of development and testing on the protocol’s incentivized testnet showcasing its XCLP (Cross-chain Liquidity Protocol), which received feedback from 3,000 community members.

The mainnet launch will be between three blockchains – Polygon, Avalanche and BSC, and will plug into various liquidity venues – primarily DEXes, including Dfyn on Polygon. Subsequently, in a few weeks after the launch, there will also be various staking and farming programs across all three chains to incentivize liquidity aggregation.

While this version one implementation of Router’s XCLP will be focused on enabling cross-chain transfers and swaps, the vision is to open up the XCLP to a wider audience of partners, including blockchain and application developers, enabling native cross-chain capability for multiple use cases including cross-chain governance, lending and borrowing.

Security is a big priority, and the team has been working hard to address issues related to security with the help of independent auditors as well as the broader developer community.  $200,000 bug bounty program has kickstarted community efforts to continuously debug the Router platform.

In addition, the Router team has already begun work on the cross-chain communication platform’s v2 upgrade, which will take place later in 2022. The v2 upgrade will introduce a generic purpose accounting blockchain that will be able to store, send, and secure messages across different blockchains.

Interoperability is the Future of DeFi

Router is an early pioneer in the cross-chain communication space. The rapid rise in Ethereum adoption has been accompanied by a raft of Layer 1 and Layer 2 competitors and collaborators such as Avalanche, Polygon, BSC etc as well as non-EVM chains such as Solana, Terra, Algorand and Cosmos. Each of these have their own advantages and disadvantages.

Router’s XCLP platform enables mainstream applications to build complex products across different chains for various specific needs. This is especially important for the growing DeFi space. Rather than focusing on just liquidity transfer, Router focuses on building generic cross-chain messaging capabilities. With Router’s SDK, any dApp whether it be a wallet or a DEX or an NFT platform or indeed anything that requires any cross-chain capability can seamlessly plug into Router and enable cross-chain messaging and communication.

As a result, Router is positioning itself to be a key connecting infrastructure as DeFi evolves.

Router Protocol is building a suite of cross-chain liquidity infra primitives that aims to seamlessly provide bridging infrastructure between current and emerging Layer 1 and Layer 2 blockchain solutions. Its vision is to promote a crypto space in which each project and ecosystem has the ability to utilize the benefits of all other projects and ecosystems in the space.

Router Protocol was founded in 2020 by Ramani Ramachandran, Shubham Singh, Chandan Choudhury, and Priyeshu Garg. Ramachandran, an MIT alum, has been a serial entrepreneur in the Fintech and digital assets space for the better part of a decade. The team also comprises an extensive list of seasoned developers in the blockchain space who, together, have experience in Web3, protocol building, UI, and UX.

Moreover, Router’s strategic round, which raised $4.1 million, saw participation from Coinbase Ventures, QCP, De-Fi Capital, Polygon, Wintermute, Shima, Woodstock, and Bison Ventures, in addition to leading Web 2.0/Web 3.0 executives and entrepreneurs. Some of the leading angels in the round include Polygon’s Sandeep Nailwal and Doordash’s Gokul Rajaram.

Combined, these resources will be used to drive Router’s roadmap and position it at the forefront of the cross-chain interoperability space.

For more about Router Protocol and its mission to revolutionize cross-chain interoperability visit their main website here.

Join the Router community on Telegram

Read the Router blog on Medium

ROUTER PROTOCOL is the source of this content. This Press Release is for informational purposes only. The information does not constitute investment advice or an offer to invest.

RainbowDAO is the champion of Metaverse Hackathon in DAO tool track