Binance Coin, the token native to the Binance network, lost its long-standing position as one of the top-3 cryptocurrencies in the market. As Cardano hit a new all-time high, it pushed BNB to the fourth position on CMC.

Now, it truly feels like the Cardano is the third-generation cryptocurrency. Except BNB seems to be trying to gain back its spot. Will it ever be able to though?

Binance Coin on the rise?

A lot of BNB supporters are about to get upset, but the answer is probably no. Yes, BNB is up by almost 13.97% in the last 72 hours. However, even that hike could barely contribute to the overall 70.6% increase over the month. 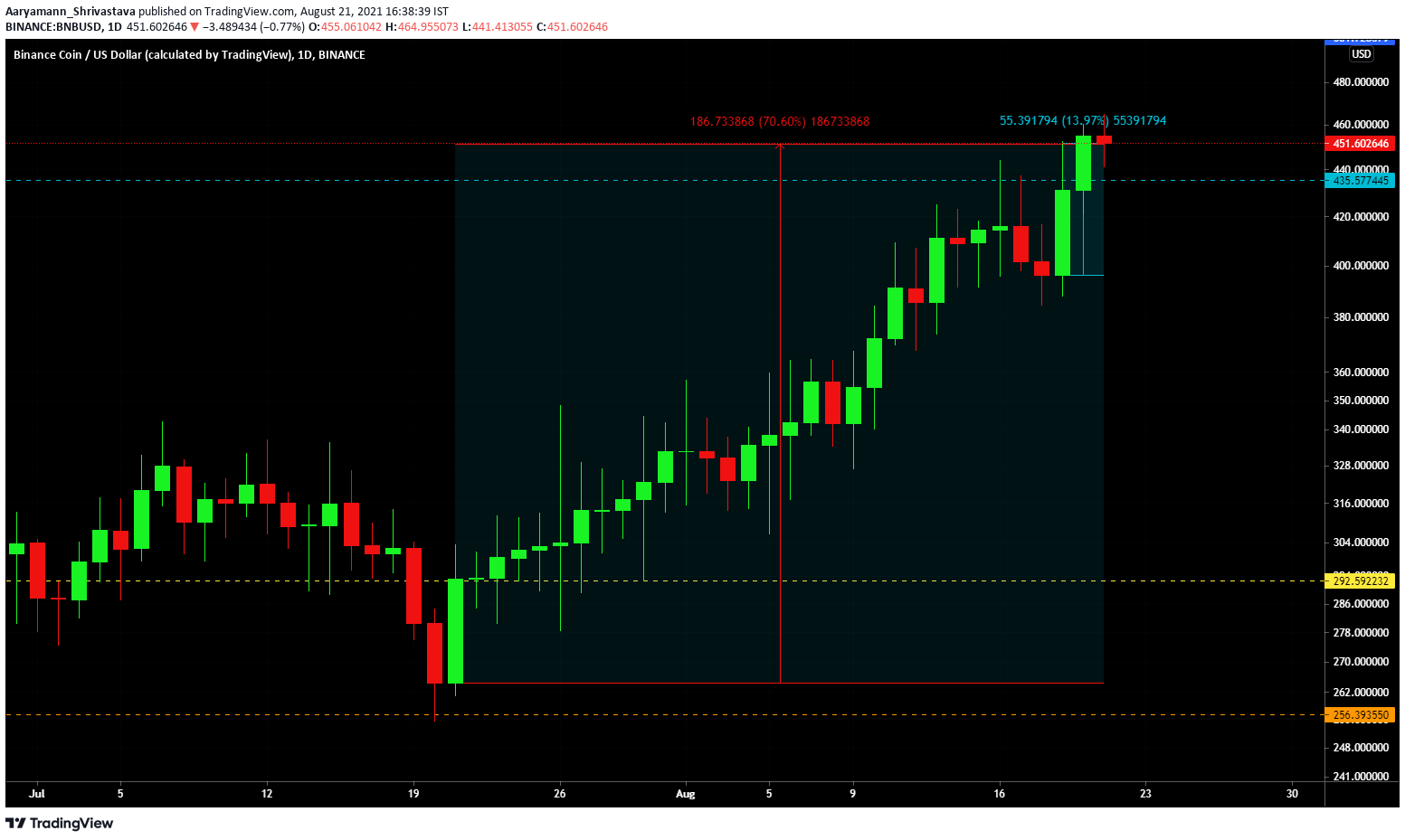 The reasons behind Cardano winning are multiple. First of all, low prices and higher liquidity make ADA the center of attention. ADA’s recent rally attracted investors, with the latter finding an altcoin with a lower price at an easier point of entry.

What’s more, with Cardano having a higher supply than BNB, liquidity becomes easier too. This is also why BNB has fewer active addresses in comparison.

Secondly, in terms of profit/loss, BNB hasn’t seen any major changes either. Over almost a month, except for a few minor spikes, profits haven’t been driving the indicator.

Additionally, development activity also seemed to suggest that Cardano was seeing consistently high development. On the contrary, Binance Coin only spiked between 3 and 6 August, briefly, before coming back down.

But, what about its market value?

Binance coin’s market value is the only factor supporting BNB with respect to metrics.

In fact, the MVRV ratio tells us that the fourth-largest cryptocurrency still has a fair value as an asset. However, that won’t be able to push BNB’s rank as Alonzo is on the way for Cardano.

While Binance Smart Chain (BSC) has already introduced smart contracts on its network, it might never manage to attract too many developers. For starters, Ethereum remains the undisputed leader in the space. Plus, many have argued that BSC is too centralized and is relevant only because it is competing against Ethereum.

Now, within a month, smart contracts will be active on Cardano. Ergo, there will be more reasons for developers and investors to head to the network.

Can BNB regain its third rank again? Well, it’s a toughie, but the crypto-market has seen unexpected turns in the past. After all, this is an industry where DOGE is a top-10 alt. So, who knows?

Bitcoin’s ‘inevitable’ rally may not be organic, but here’s what might save it