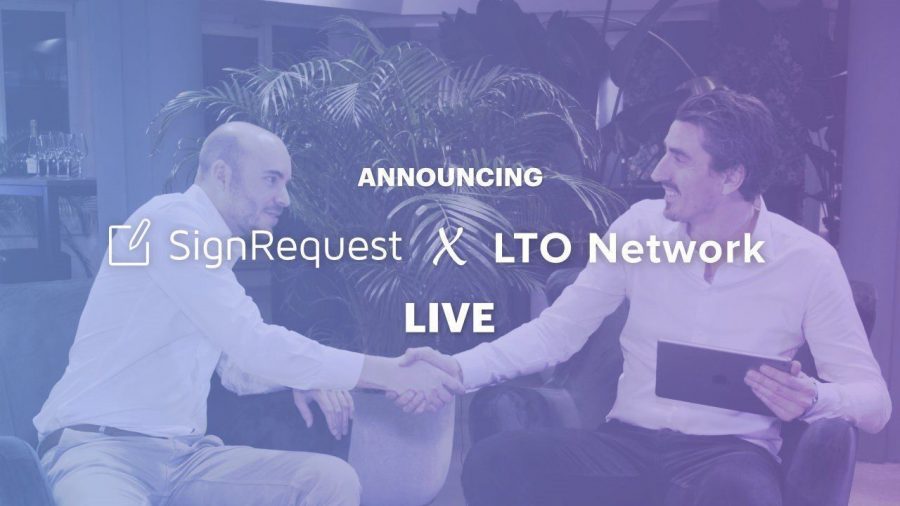 SignRequest, one of Europe’s leading electronic signing providers, added a new blockchain solution to its electronic signature application. By integrating the Dutch-based blockchain platform LTO Network, they enable blockchain technology as an option for more than 1 million users worldwide, resulting in over 300,000 monthly transactions on LTO Network public chain.
Over the last few years, the adoption of the digital signature has seen an immense rise in the corporate landscape. Whereas just years ago, scanners and couriers had a significant part in the concluding of a ‘wet signature’ agreement, the digital signature has become embedded widely in finance and legal departments.
Industries that are traditionally slow on widely adopting new technologies, with digital signatures appearing to be the exception to this rule.
This multi-billion dollar industry with a 31% per year compound annual growth rate shows the stretch that this technology still has to offer.
With the future in mind, in which novel solutions allow digital signatures to become digital workflows that save money, increase efficiency and move businesses forward, these projected growth numbers even seem rather conservative.
Michaël Krens, CTO of SignRequest remarked,
“Using the blockchain for Proof-of-Existence for electronic signatures just makes sense and is already happening. When we researched blockchain platforms, LTO Network stood out in terms of speed, set-up, and capabilities. We are able to include the blockchain transaction identifier directly into our signing logs which are circulated upon signing without the need to wait minutes for confirmations. Next, to that, the potential of creating decentralized workflows did the trick to add the LTO Network solution as an option to our users.”
Rick Schmitz, CEO of LTO Network mentioned,
“The LTO public blockchain is optimized for anchoring transactions, making it light and effective. Using the so-called Bitcoin-NG protocol, the network pre-approves transactions instantly before the hashes are stored on LTO Network.  This makes the LTO Network ideal for Proof-of-Existence on documents, emails, and other off-chain data.”
To really differentiate yourself from other players in the electronic signature landscape, you have to think outside the box. You can trust SignRequest systems, or any other signature provider, that the time of signing stated in the audit trail is the correct one, but with enabling blockchain technology our users now have the possibility to have hundreds of other systems verifying this as well and thus eliminating the need to trust a single party.
Rick Schmitz, CEO of LTO Network said,
“SignRequest is a perfect example of a forward thinking company who sees the blockchain landscape and narrative maturing. Millions of transactions per year will immensely stimulate LTO Network’s usage and the trust in it.”
Do you want to experience blockchain in electronic signing?
Try it out, it’s LIVE!