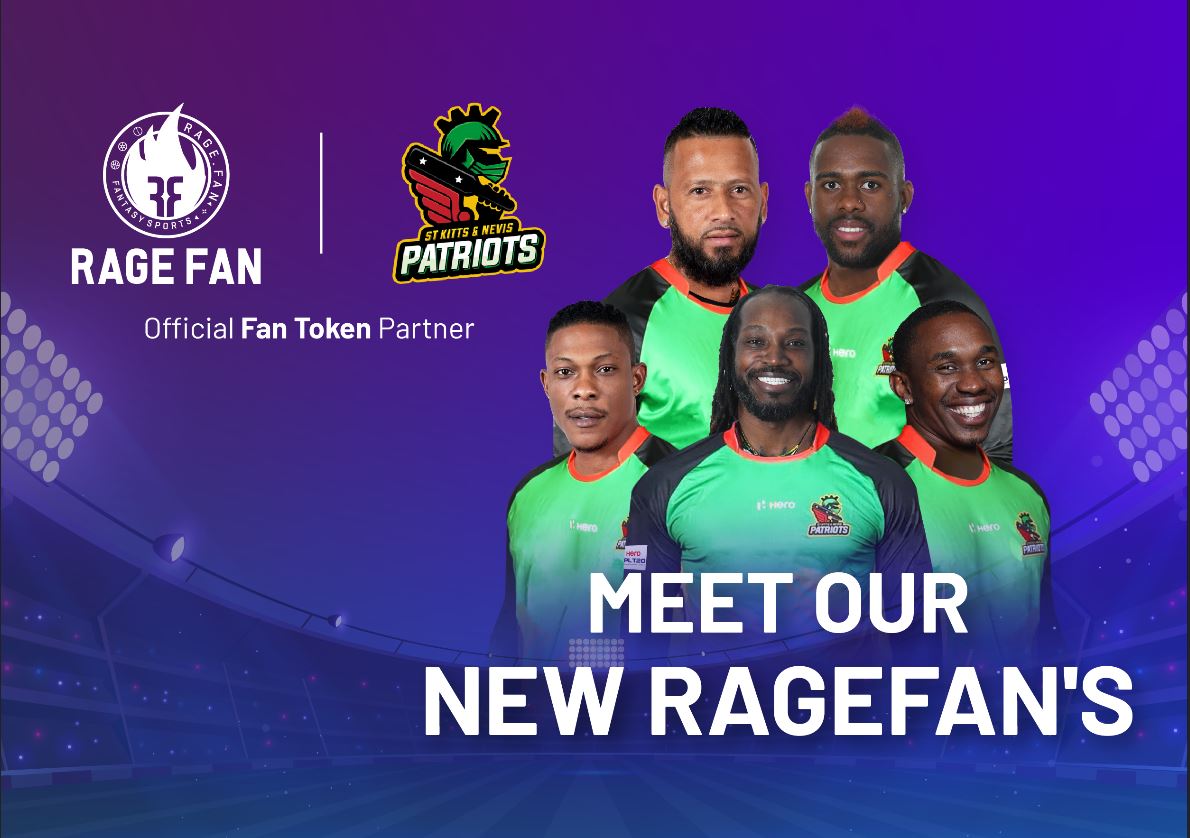 SKNP Fan Token will premiere on RageFan’s recently announced “FanPad”, a launchpad built for the world of FANDOM.

SKNP, a popular cricket franchise in the Caribbean Premier League (CPL T20) that counts international cricketers Chris Gayle and Dwayne Bravo among its players, announced a multi-year strategic partnership with RageFan, a fan-first sports platform developed on blockchain. The partnership signifies SKNP and RageFan’s commitment to sports and fan engagement.

RageFan will help SKNP launch its fan token offering (FTO) and a mobile fan engagement app for the club’s supporters. Fan tokens allow fans to gain a ‘slice of influence’ and access exclusive fan rewards, content, and experiences such as meeting with players.

The SKNP Fan Tokens will premiere on RageFan’s “FanPad”, it’s recently announced launchpad exclusively for holders of $Rage. “FanPad” is envisioned as a multi-chain launchpad for fan tokens and NFTs specifically aimed at the world of FANDOM. Where there are fans – Sports, Music, Entertainment, Stars, Artists, Influencers, and even Brands – the world of FANDOM offers potential and possibilities with Fan Tokens and NFTs.

SKNP’s fan token is planned for launch later during the year, allowing fans to engage with the club through mobile voting and polling through the app. Meanwhile, there will be exclusive NFTs that fans can purchase and win club merchandise through participating in contests that will be launched soon as CPL kicks off. The club has said that the alliance with RageFan forms part of their broader strategy to strengthen their relationship with fans and build a stronger fan base.

RageFan is well known for its Sports NFTs and DeFi products like their ‘Stake & Mint NFT’ platform, Daily Fantasy Sports (DFS) App. Recently, it launched an ‘Olympian NFT mint’ commemorating the Tokyo Olympics with a reward pool of $150,000 USD in $Rage and other tokens. It airdropped co-branded NFTs loaded with $150-200 worth of token rewards in partnership with dotmoovs, Footballstars.io, GBV Capital, Gate.io, and polkalokr, at Wembley stadium for the EURO2020 matches that users collected using Scramble by RageFan – an AR-based Token & NFT Hunt App.

Champions League and Europa League, NBA, MLB). RageFan has already distributed close to 500,000 $Rage as a reward to its NFT holders.

RageFan CEO and founder Satheesh Ananth, said, “RageFan is very excited to partner with SKNP, one of the biggest teams in the Caribbean Premier League. We see a lot of synergies between SKNP and RageFan in terms of our approach to the fans, the sport, and the growth plans for our brands. This partnership shows our commitment to the sporting world, and we will continue to push the boundaries of fan engagement”

Mahesh Ramani, SKNP’s owner, said, “We at the Patriots have always been on the lookout for newer forms of fan engagement especially considering the changing viewership patterns, and hence are really excited about this partnership with RageFan. The fan token space is a new and exciting fan engagement prospect and the value adds we can provide for our fans are endless. I am sure this will be a long association wherein we create a fantastic and unmatched experience for our fans.”

RageFan has global aspirations for fan engagement and the world of FANDOM by enabling fan tokens for multiple sports across football, cricket, basketball, and wherever fans are involved like music & entertainment, artists, and more.

SKNP, based in Saint Kitts and Nevis, is a well-known cricket franchise in the popular Caribbean Premier League (CPL T20). The franchise boasts of some leading international cricketers such as Chris Gayle, Evin Lewis, Dwayne Bravo, Anrich Nortje, Sheldon Cottrell amongst others. The CPL is an annual franchise 20/20 cricket tournament based in the West Indies.

The league was inaugurated in 2013 and is the premier franchise competition in the Caribbean. Six teams compete in the league which is now going into its ninth year.

Also, check out their socials:

Bitcoin: CFTC Commissioner thinks this can solve ‘a lot of institutional hesitancy’