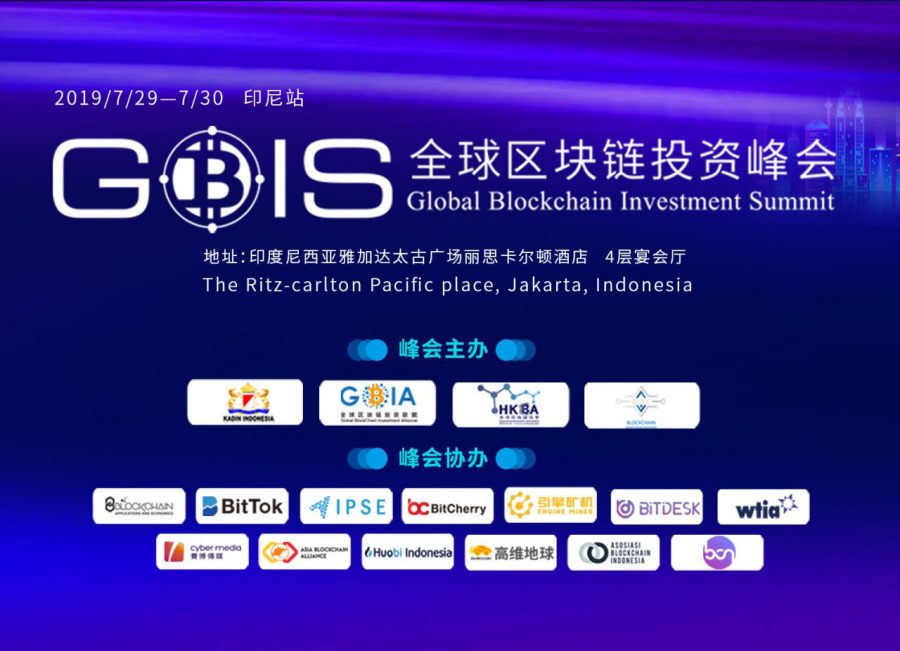 In recent years, the technology and application of blockchain in Southeast Asia have developed rapidly over the past. Governments and associations around the world, as well as blockchain alliances,  are actively exploring the potential development and application prospects of blockchain technology in various fields such as governing management, commerce, finance, tourism, and agriculture.
On April 24th, the 2019 Global Blockchain Investment Summit [GBIS] was successfully held in Singapore. During this summit, regulators from different countries and technology experts gathered to discuss the current status, development, and future of blockchain technology and distributed commerce in Singapore.
Based on the current global development of the blockchain technology and it’s cutting edge trends, the Global Blockchain Investment Alliance [GBIA] and the Hongkong Blockchain Association [HKBA] will be allied with the Indonesian Chamber of Commerce and Blockchain Center of Excellence & Education [BCEE] to hold the Global Blockchain Investment Summit from 29th to 30th July 2019 in Jakarta, Indonesia. During this, there will be a series of discussion about the development of blockchain technology and application, in-depth exploration of how governments and traditional business can integrate into the current transformation of the digital economy and seize the core aspects of technology and economic development.
Multi-party cooperation to jointly deploy the Indonesian blockchain ecology
The summit specifically invited representatives of Indonesian national leaders, members of the United Nations Blockchain Committee, members of the United Arab Emirates, the Indonesian Chamber of Commerce and Industry, the Indonesian Ministry of National Investment, the Central Bank of Indonesia, the United Bank of the Philippines and others related bank agency representative to discuss about the transformative impact of blockchain on the transformation of the digital economy from the perspective of government management and global economic development.
In addition, the summit will also be affiliated with the Association of Blockchain Applications and Economics [BAEF], Global Clearing Union [wtia], Asian Blockchain Alliance, Indonesia Blockchain Association and other associations authority, with Huobi Indonesia, BitTok trading platform as well as IPSE distributed search engine, BitCherry distributed electricity supplier, Engine Miner, and there is also a one-stop blockchain media platform, BitDesk, and CyberMedia. Together, we will build an excellent integrated blockchain system, to help accelerate the transformation of the digital economy in Indonesia.
At the same time, the famous economist Zhu Jiaming, Hongkong Blockchain Association Chairman Zhang Junyong, Global Blockchain Investment Alliance Founding Chairman Ender Xu, Golden Finance CEO An Xinxin, Director of Distributed Economic Management Office Chen Caigen and many other authoritative experts in blockchain fields, as well as more than 500 top investors, more than 3000 industry elites, and hundreds of media will gather in Jakarta to further discuss the development trend of blockchain technology, industry application scenarios, the latest policy and investment strategy as well as the blockchain ideology behind the technology, etc. Aims to promote in-depth exchanges among leaders in various fields, share resources, and collaborate on the ecological development of the blockchain industry chain.
Three aspects of leading the discussion on blockchain frontier
As a subversive technology, blockchain is receiving a wide range of attention from underlying architecture development to application in each sector, from national strategy to corporate practice. In the fast-growing blockchain technology, the application execution is especially important. During the two-day summit, dozens of in-depth keynote speeches and panel discussion will explore the development trend and application prospects of blockchain technology, providing enterprises, industries, and governments with cutting-edge thinking and innovative solutions for economic transformation.
Aspect 1: Digital economy to promote Indonesia’s economic development
Earlier, UN Assistant Secretary-General Xu Haoliang said:

“We believe that blockchain is a technology that can have a huge impact on developing countries in many ways.”

The United Nations Development Programme has also used blockchain technology to help improve the lives of people in developing countries all over the world, blockchain has a great potential for achieving sustainable development goals in terms of aid, immigration, cross-border payments, and energy efficiency.
In the past two years, there is a continuous growth of digital innovation as well as the competition of local companies in the field of digital transformation where several initiatives are launched. Innovation accelerators such as cloud, data, artificial intelligence, blockchain, and IoT are becoming the key drivers of diversified innovation for Indonesian companies. Among them, blockchain technology has contributed greatly to Indonesia’s economic growth in finance, entertainment, agriculture, tourism, transportation, and governing management.
Aspect 2: Distributed Business Leads the Digital Economy Era
The new revolution of business model is closely related to the development of distributed technology. The goal is to enable suppliers and intermediate platform providers in commercial activities to fully decentralize their production, management, operation, and service. Distributed business, a protocol based on the underlying technology of the blockchain and the concept of the tokenomy are leading the rapid development of the digital economy.
Distributed business as a new business model, their biggest difference from the franchise business model and sharing business model is that distributed business can achieve more thorough full decentralization and monopoly. For Indonesia, their 100,000 small and medium-sized enterprises can truly become the main lead of the business value chain through a distributed business model, thereby stimulating economic growth, broadening employment, encouraging entrepreneurship and innovation.
Aspect 3: Blockchain empowers traditional businesses
Current Indonesia, whether it is a private sector or government body, has been actively exploring blockchain technology and attempt on implementing blockchain technology into agriculture, transportation, finance, tourism, and government management.
In the financial sector, the Bank of Indonesia [BI] has announced their plans on launching its digital currency. Several banks led by Mandiri Bank, are also exploring the use of blockchain technology for financial trading. Apart from that, the use of blockchain technology has enabled efficient and free funds transferring, and the inward remittance in Indonesia has also increased significantly.
In terms of the hospitality industry, blockchain technology could have a major role in the area of transforming the vacant property management right. This is to provide a reliable, transparent and measurable collaborative scheme,  as well as efficiently use of the vacant property management right to achieve high income, high-efficiency, and mutually profitable collaboration.
With over 17,000 islands, Indonesia is one of the largest island nations in the world follows by a clustered population. Looking into this, the efficiency of managing traffic data information through the traditional method is unable to meet the requirements of its government. On the other hand, the use of blockchain will effectively reduce the cost of data loss incidents and data corruption, enhances the link between parties involved in traffic management, which helps to increase its efficiency and credibility, making it possible for pre-control. On the other hand, blockchain technology is also used in the field of logistics and shipping, providing an effective logistics management in terms of time and cost-effectiveness by instantly updating the exact location of the goods in transit.
The world is speeding up following the blockchain era. The blockchain technology innovation and commercial application are driving the industry to change, and it also profoundly affects the upgrading and value innovation of all walks of life. With the stable economic growth of Southeast Asia represented by Indonesia and the dual advantages of demographic dividend and market potential, the strategic layout of the Southeast Asian blockchain innovation is imperative. The grand scale and superb standard of the summit will not only further stimulate the rapid growth of the digital economy in Indonesia but also will have far-reaching significance and influence on the development of blockchain innovation in Southeast Asia.
We are delighted to welcome you to the 2019 Global Blockchain Investment Summit [GBIS] which will be held from 29-30 July at the outstanding Pacific Place in Jakarta, Indonesia to witness the beginning of a new era.