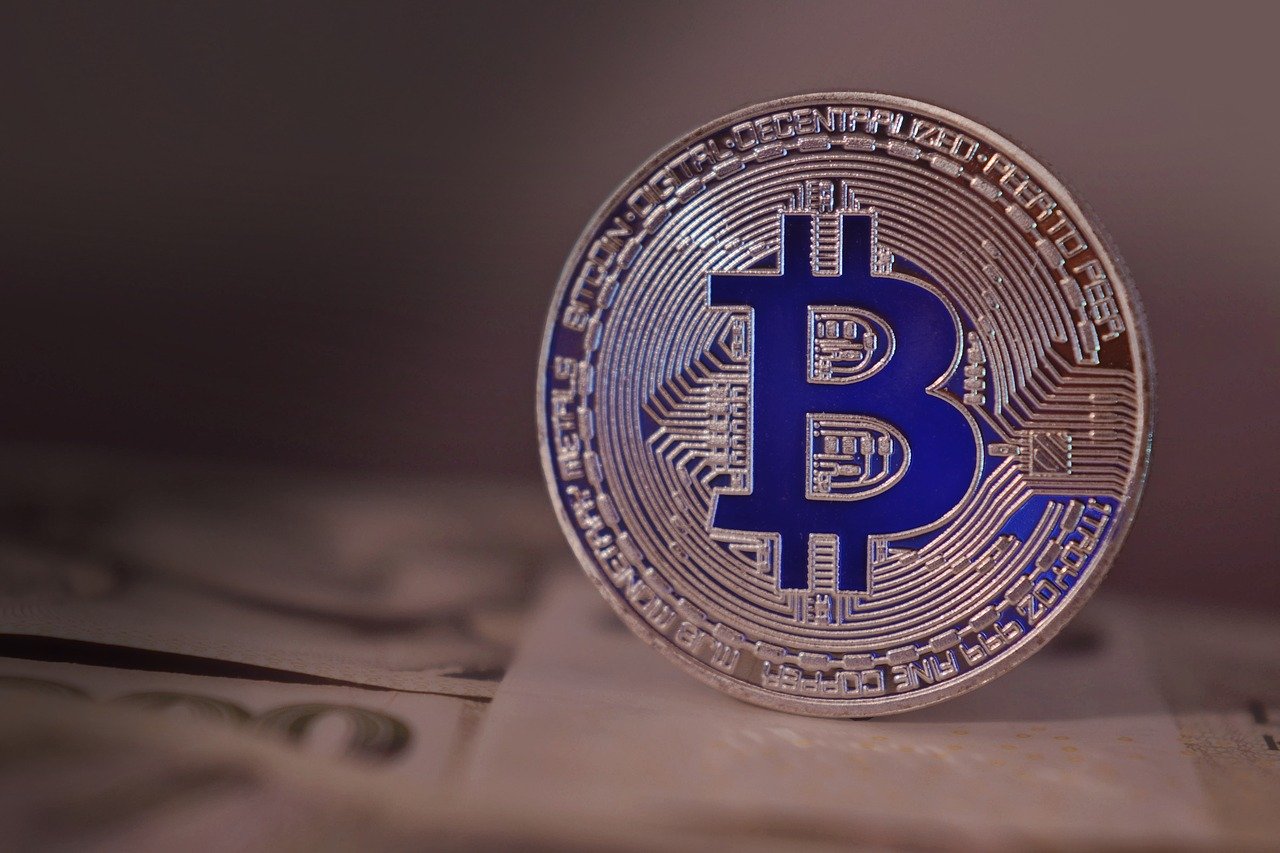 A few days of corrections notwithstanding, Bitcoin, at the time of writing, was still well placed to consolidate its position on the charts before climbing to hit a new ATH. Not only is its Daily Active Addresses count strong, but so are its trading volumes. In fact, many in the community have very bullish expectations for the cryptocurrency, something evidenced by the fact that quite a few market investors are placing their bets on a strike price of $80k in April.

This Friday $6 billion in options contracts are set to expire. #Bitcoin price expectations for April are high with lots of investors placing their new bets on $80k. pic.twitter.com/xRipoAaD1F

However, what often gets forgotten in the conversation around on-chain metrics and indicators is how the macro-environment might come into play. The same was the subject of Uncharted’s latest issue.

Why is it worth looking at the macro-environment though? After all, doesn’t the crypto-market pride itself on being uncorrelated? Well, yes, but the fact of the matter is that this hasn’t always been true. As the newsletter pointed out, the aforementioned corrections in Bitcoin’s price were precipitated by a general downturn in equities. The same was fueled by “the quarterly rebalancing of institutional investors, increased uncertainty regarding Brazil’s new covid variant, and interest rates that are still on the rise.”

In fact, it can be argued that the said “coupling” emerged after March 2020, with the intra-day BTC-S&P 500 correlation rising from 0 to 0.25 since. That is the downside of institutional investors coming in and the increasingly overlapping investor base of crypto and equity markets. 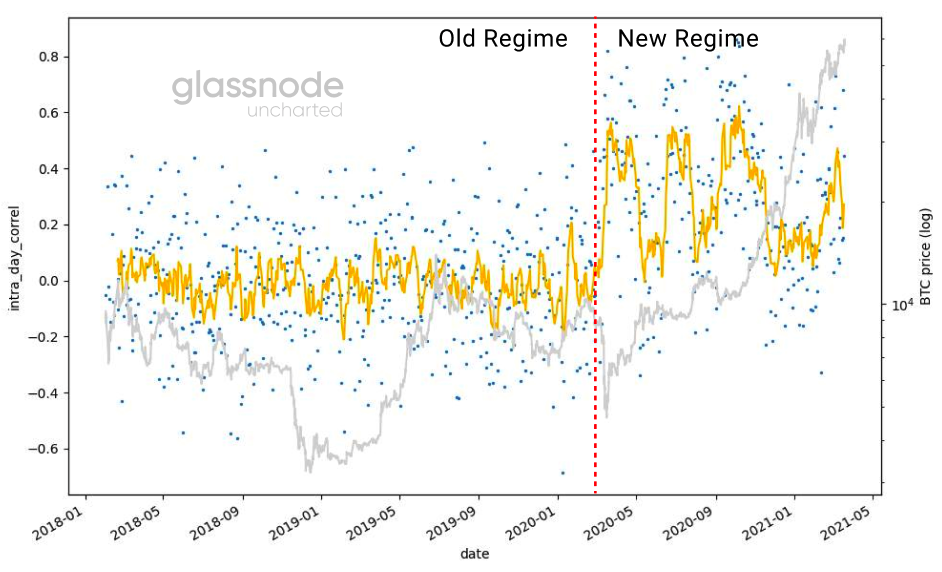 Now, from the perspective of an institutional investor, what often catches the eye about Bitcoin is its properties as an inflation hedge. While the crypto-market may be somewhat in sync with mainstream financial markets these days, the value of something like Bitcoin as an inflation hedge has also climbed since the outbreak of COVID-19, pushing the price of BTC higher.

How so? Well, simply put, money printers haven’t stopped and the cryptocurrency is slowly overtaking the likes of Gold as the more suitable inflation hedge. According to Uncharted, the same can be evidenced by the fact that while net flows into Gold ETFs have been negative, “in Grayscale’s BTC trust alone, inflows outpaced the amount of newly mined Bitcoins in Q4 of 2020 by 200%.”

In fact, the same was highlighted recently by Soros Fund Management’s CIO who said,

“When you look at gold price action in the context of the inflation hedge narrative, it has struggled to gain traction because Bitcoin has taken some of its powerbase away.”

Thanks to the Federal Reserve’s monetary policies, the money supply has been spiking. However, what has also happened is that this has coincided with households saving more capital than usual in light of the uncertainty surrounding the pandemic. This capital, ordinarily, would have been used to pay off mortgages and invest in new asset classes.

With economies around the world opening up right now, what can we expect going forward? Will the saved up capital finally be re-invested in assets such as cryptocurrencies? If it happens to be so, that would mean an increase in spending and velocity, both of which will just make Bitcoin more attractive as an inflation hedge.

Here, it’s also worth considering what the effects of the stimulus checks would be, especially since its payouts in January were key to the crypto-market’s price surge. The one in March is reportedly is much bigger than the one in January, ergo, it’s worth predicting that once thousands of households in the United States finally receive their much-delayed checks, something similar will play out. 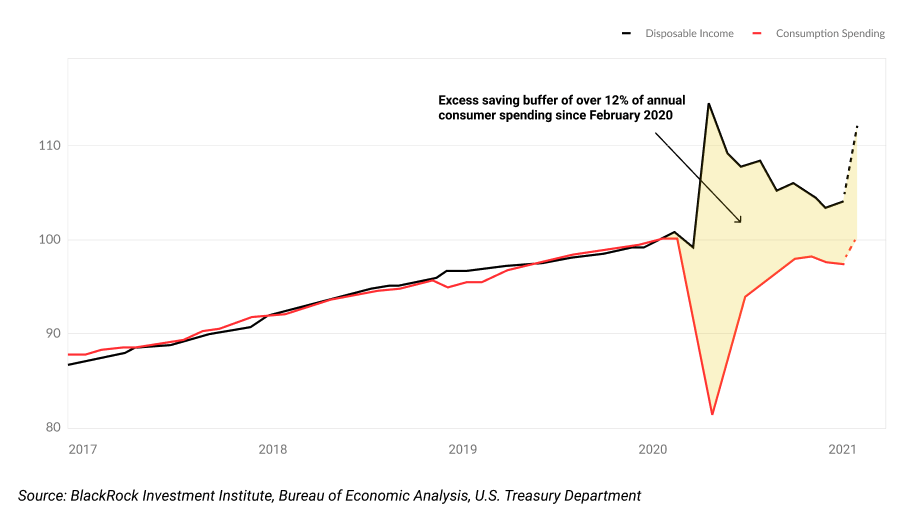 Just think about that – At the moment, the equities market is 40 times the size of Bitcoin’s market cap. 40 times. What this means that in light of the accompanying inflation and the incoming stimulus packages, even the smallest allocation or switch from equities to crypto will precipitate a very significant movement on the charts for Bitcoin.

Finally, one might argue that the timing of the same couldn’t be any better since all the aforementioned factors give the world’s largest cryptocurrency an opportunity to reverse its fortunes in a month that has traditionally seen it fall on the price charts. If the March stimulus payouts do come into play, we might once again see the January cycle repeating itself.