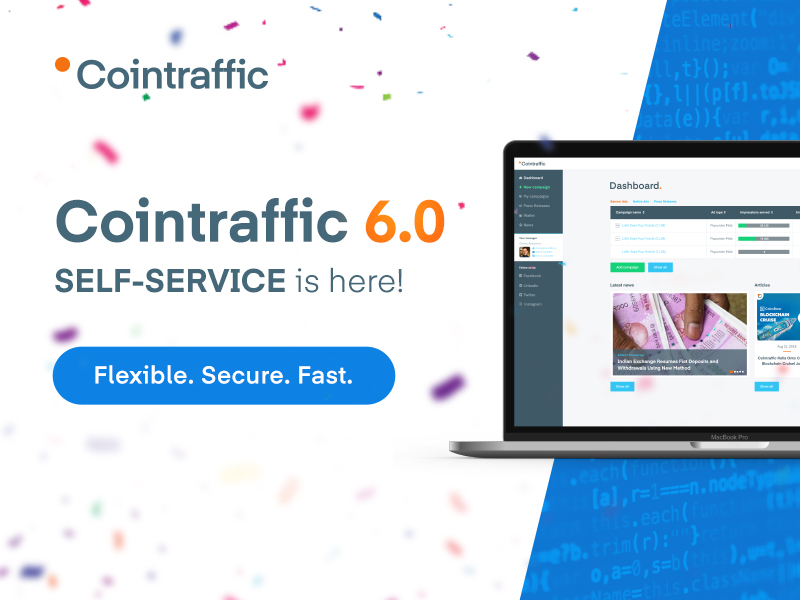 Crypto’s leading ad network is preparing for a major launch today with the arrival of their flexible, secure and powerful Cointraffic 6.0. self-service option.
Cointraffic is widely known as the loudspeaker for the cryptocurrency community. Using the proprietary network, advertisers can rocket launch their message out across thousands of reputable crypto websites. However, for a number of months, the team has switched their focus from controlling the rocketship – to giving their audience the control. Their mission?
To allow users to manage their own ad campaigns via a robust self-service dashboard.
The change, which is only one part of an overall system relaunch they’ve aptly coined Cointraffic 6.0, means that from today, advertisers will have total control over the campaigns they run. This includes analytics, campaign traffic purchasing, blacklisting, and the ability to tweak campaigns at their discretion. Previously, only the company’s service managers had this ability.
According to Cointraffic CEO, Sergei Verbitski, the change has been a result of listening to their customers. He said:
“When making pivotal business decisions, I always go back to our ‘why’. Why do this now? Well, the reasons are clear. Our customers told us that they wanted the ability to control their own activity, right from their dashboard. They wanted complete oversight into the analytics. They wanted the ability to ‘play’ with their campaigns; to tweak and optimise them at their own discretion.”
“So we set about creating a system that allowed all of that; a system that had flexibility, security and power as the defining pillars behind its construction. And what we created a is completely robust self-service tool Cointraffic 6.0. In our business so far, we’ve helped facilitate over 80 crypto projects with funding close to $1B. Today, we are proud and excited to launch Cointraffic 6.0 in the hope we can continue that successful trajectory.”
According to the company, the service managers will still be on-hand to answer questions, guide first-timers through the campaign setup process and help with creative assets on request. But for seasoned advertisers who want total control? This is an exciting opportunity given the company’s promise of lower prices – allowing for more traffic to be purchased for less. And in a world first, Cointraffic is welcoming early-adopters to test and use the program from today.

Other perks of the self-service option as a part of Cointraffic 6.0:

Steer your own rocketship, with access to ground control whenever you need.
The CEO is available for interviews and media ahead of and after the launch. Read more about Cointraffic’s history and ethos on their official website.

ProBit Exchange lists KEY/BTC; US $50,000 worth of KEY coins up for grabs!