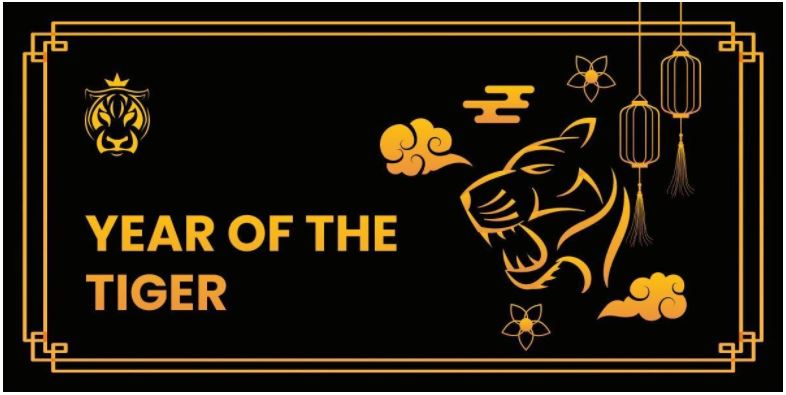 According to Chinese astrology, 2022 is the Chinese Year of the Tiger. Chinese tradition has it that the Year of the Tiger is the third of a 12-year cycle of animals in the Chinese Zodiac. While there are different stories about how the animals came to be part of the Zodiac, one of the most prominent is that the Jade Emperor ordered a race to choose personal animal guards, selecting winners according to each animal’s arrival at the finish line.

Regardless of the background story, the Year of the Tiger is very significant and generally attributed to the tiger’s personality. For instance, astrology experts believe that people born in the Year of the Tiger are similar to the big cat in many ways. Like a tiger, these people are very independent, fierce, authoritative, brave, and can muster the aggression required to fight for a worthy cause.

The International Union for the Conservation of Nature (IUCN) lists the largest living cat as “Endangered” on its Red List of Threatened Species with all of the tiger’s relevances. Several factors, including a demand for parts to be used as ‘cures’ for ailments and poaching for money, caused a drastic reduction in the global tiger population. In addition, the human population continues to grow and affect the tiger’s natural habitat, consequently reducing the apex predator’s population.

Now more than ever, the need for tiger conservation is paramount. Several advantages directly tied to the tiger’s population might disappear if the numbers continue to reduce. For instance, tigers help to balance the ecosystem by keeping wild ungulate populations in check. In addition, other animals that dwell around tiger landscapes – such as elephants – thrive considerably. Furthermore, tiger reserves serve as good water sources, especially in countries like Indonesia, Thailand, Malaysia, and India.

Ensuring that the tiger population flourishes is vital to the success of a functional ecosystem. This is why Tiger King is taking the lead with tiger conservation, with plans to improve the apex predator’s chance of survival in 2022.

The Tiger King Coin ($TKING) is a decentralized token on the Ethereum network that focuses on conservation and sustenance efforts for the big cats. The first official coin representing tigers, $TKING, is living true to its name by gearing efforts towards reducing the animal’s chance of extinction while also spreading news of the tigers’ actual state to the general public.

The Tiger King team will go towards the charity route in 2022, with the end goal being to expand into larger markets. Tiger King has already donated 500 tiger plushies to St Jude Children’s Research Hospital, which is just the start of their charitable efforts. At different points throughout the year, the team will float several charity and fundraiser events and efforts to raise funds for the tiger’s plight. According to the plan, the funds will go to conservation exercises that gradually increase the tiger’s survival likelihood. In addition, Tiger King also plans to fund charity organizations with the same goal. It aims to become a project and platform that actively supports noble causes surrounding the wellbeing of tigers.

Funds will also go to public sensitization efforts. Tiger King wants to correct a lot of the misinformation spread about the animals. Currently, there are still many people who do not know that the tiger is an endangered species. For those who know, the information on the tiger’s current situation is inadequate and does not carry the required amount of urgency.

Tiger King focused itself on aligning with the Chinese Year of the Tiger and is imbibing some of the tiger’s aggressive and dogged attributes with this campaign. The Year of the Tiger is fast approaching, with the team at Tiger King aiming to promote themselves to Asian communities with related marketing initiatives. By the year’s end, the goal of the Tiger King team is to amplify funds and favorable legislation to save the tiger from extinction.