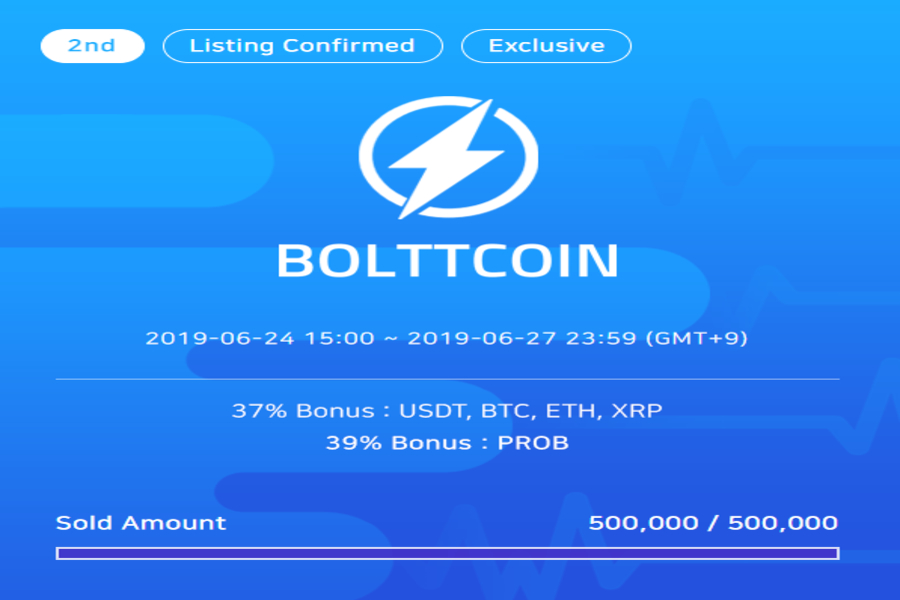 Fresh off the heels of a head-turning 1-second sellout for health gamification platform Boltt Coin’s IEO, ProBit Exchange delivered an equally impressive Round 2 sellout just 2 seconds after launching on June 25 15:00 KST.
Round 1’s allocation of 56,000 BOLTT tokens was devoured in the blink of an eye, prompting the launching of Round 2. With many jumping on the opportunity, some investors walked away empty-handed following the 2-second sellout of all 500,000 BOLTT. Even with a much larger allocation, the hype surrounding BOLTT tokens proved to be substantial with the Round 2 sellout requiring just an extra second more than the first to complete.
A staggering $250,000 was raised during Round 2, culminating in a total of 278,000 raised in 3 seconds during today’s BOLTT IEO, setting a new record for ProBit Exchange with the consecutive sold-out rounds to wrap up the massively successful start.
With a string of IEO sellout campaigns including Bido and now Rounds 1 and 2 for Boltt Coin, ProBit Exchange continues to flex its IEO muscle and provide expedited fundraising for the quality projects that emerge among the countless numbers of IEO applicants.
For those who were unable to participate in Round 1 and Round 2, ProBit Exchange has announced a third round of IEO for Boltt Coin on June 26 at 12:00 KST due to popular demand.
About ProBit Exchange
ProBit Exchange has completed almost 60 rounds of IEO and has amassed a solidified reputation over a short 6-month span since the startup’s launch. They have conducted multiple rounds of sell-out IEOs and raised millions in the process while refraining from any form of wash volumes or misleading figures. Please visit the IEO page to view the simple, efficient user interface.
ProBitExchange has also introduced new features such as an ongoing trade mining and stake mining beta service, PROB staking for users to earn discounted trading fees, a referral program that provides 10-20% in further transactions fee savings, as well as a newly released app available on Google Play.
ProBit Global
ProBit Korea
IEO at ProBit Exchange
Many projects place their trust in ProBit Exchange’s IEO platform as we are a one-stop exchange for:
1) Fund-raising – Stellar fundraising track record including over $500,000 raised over three rounds for Spin Protocol, $53,000 in 6 seconds for LINIX, and $60,000 in 11 seconds for Steemhunt.
2) Listing – Instant liquidity against fiat and crypto pairings. Korean Won and USDT. Mild MM included
3) Marketing – Comprehensive services including marketers, marketing agencies, social media marketers and news agency on retainer. View a sample marketing campaign that we conduct for IEO.
Interested projects should fill up this form to start the due diligence process.

Industry player Fumgo gives 5 tips on how to trade cryptocurrencies