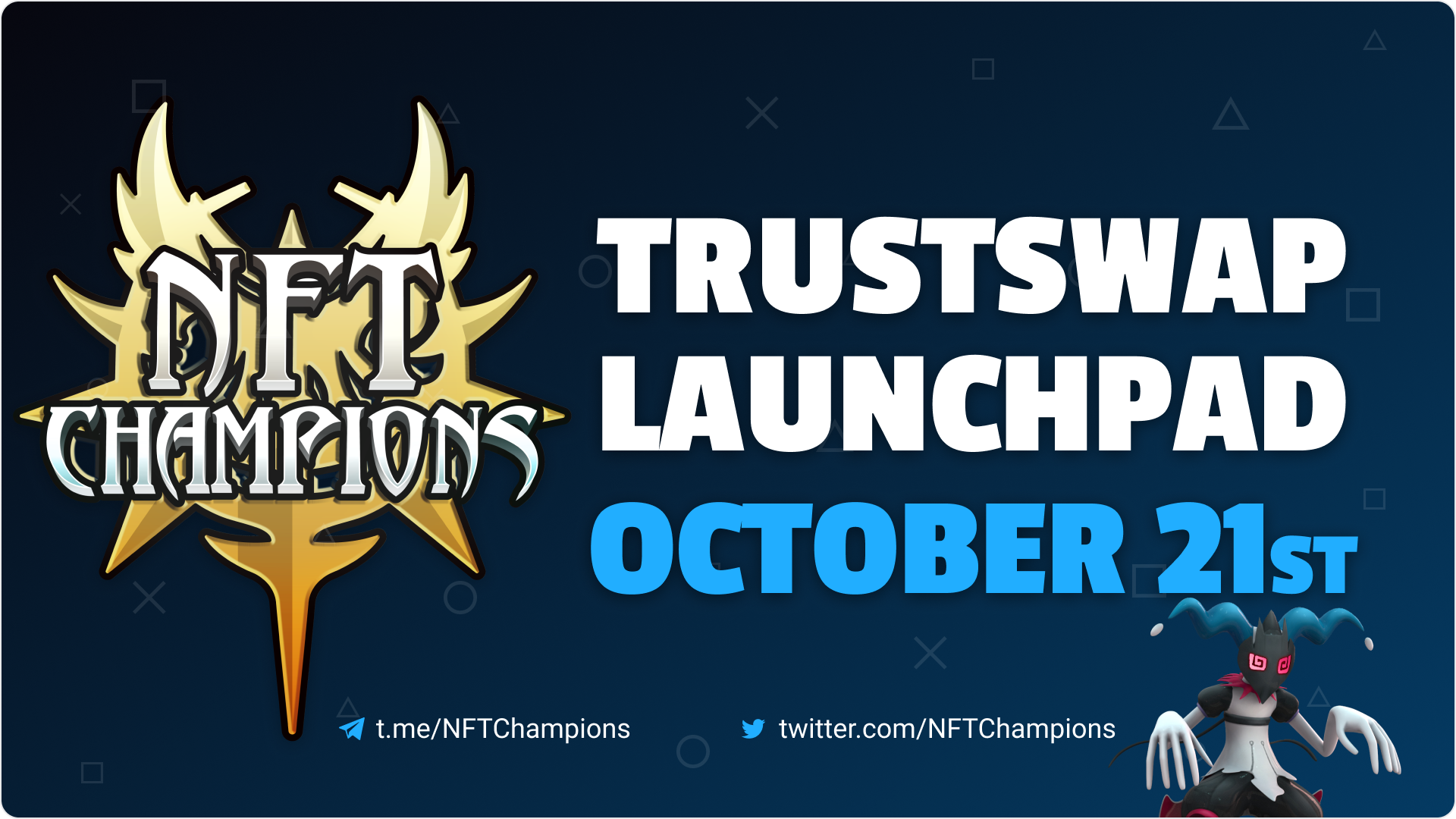 The NFT sector became huge in 2021, and it is nowhere near stopping, or even slowing down. In fact, experts throughout the crypto industry are becoming more and more certain that the trend will continue to grow in years to come, just like DeFi did.

In the meantime, the NFT sector continues to also connect more with other industries, with gaming taking the lead. The most recent example of this is NFT Champions — a blockchain-based play-to-earn game that relies heavily on NFTs.

The game was developed by SIGMA Studios, a video game company headquartered in Denver, Colorado. Other than NFTs, the game will have its own cryptocurrency that is actually expected to be offered in a TrustSwap Launchpad-based token sale, taking place in only a few days.

According to the project’s announcement, the token sale will be held on TrustSwap this Thursday, October 21st, at 9 am PST. Anyone will be able to participate as long as they are not from the US or UN-sanctioned countries., even if they are not members of the TrustSwap community.

Of course, if the token sale becomes oversubscribed, TrustSwap’s own community will be prioritized, based on the amount they have staked. Other than that, everyone is welcome to join. Interested buyers will have to apply first in order to become participants, which will include going through a KYC procedure.

Applications themselves will be submitted on October 21st, starting at 9 am, and users will be able to do it for the following 24 hours. After that, there will be a 48-hour waiting period, after which the users whose applications have succeeded will receive an email confirmation about the amount they are allowed to contribute to the offering.

Users will then be able to send these funds within the next 24 hours and claim their CHAMP tokens. If the users’ application succeeds and users do not contribute funds to the token sale during these 24 hours, then their position will be given to the next in line, while the original participant will lose their right to participate.

Finally, after the process is completed and all tokens are distributed, the token will be listed on the DEX, which is expected to take place on October 27th.

In order to prepare for the token offering, users who wish to participate need to stake their SWAP tokens, provide their documents for KYC, take a selfie of themselves holding their ID card with a note that reads “NFT Champions 2021”, and submit their details. After that, they need to follow the TrustSwap Announcement channels for updates and confirmations.

As mentioned previously, NFT Championships is designed to be a play-to-earn NFT-based game. More than that, it will be the first game of this kind, and it was made to be stunningly beautiful, highly immersive, and above all — fun to play.

Essentially, it will function as an open-world MMORPG, where users can buy and use NFTs, train, fight various raid bosses, explore the world, and discover its secrets and new locations. They can also invite friends to join them and travel alongside them, or meet new ones along the way.

We also mentioned that the $CHAMP token that is about to be launched on TrustSwap will be the in-game currency, which players can also earn alongside unique rewards, all within the game.

As for NFTChampions, they can be purchased with $CHAMP tokens for as long as they do not hit their mint limit. After that, new NFTs involving that specific Champion will no longer be available for minting – only for purchase from other players who may be willing to sell.

The best and quickest way for players to win cash prizes would be to go against a raid boss, but in order to win, they will have to train their monsters, or band together and attack as a group. But, the highlight of the game, and its ultimate challenge, will be the real NFT battles.

Users will be able to duke it out with other players and win not only cash rewards but also NFTs. In other words, there is no shortage of opportunities in this world. The battles will be turn-based, with the order being determined by the stats of each NFT. However, there is a possibility to alter the order of the turns through counters. As for NFTs, they can use up to four attack skills that they can learn either organically or through the use of training disks, which bring new skills.

Also, players should note that TrustSwap has incubated the game, meaning that it will continue to receive support and guidance from the company’s experts in order to achieve long-term success and reach its goals. You can read the official announcement at TrustSwap’s blog.