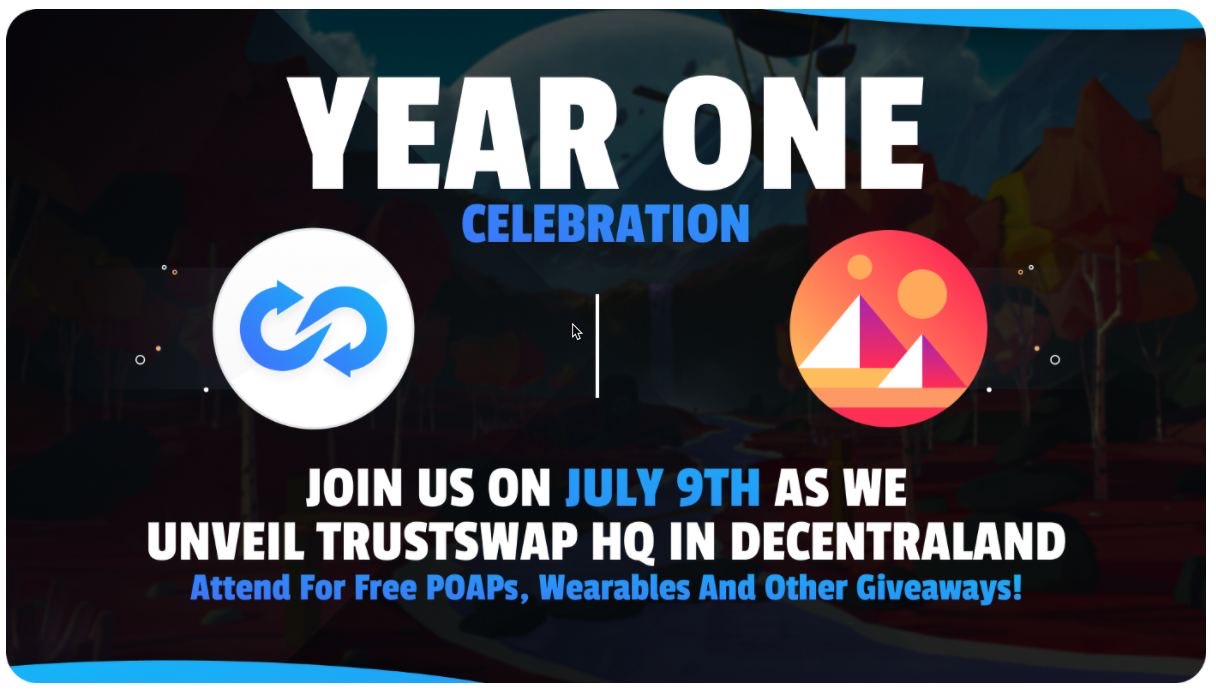 DeFi project TrustSwap is about to celebrate its first anniversary on July 9th and to do it, it has something special in mind — a grand opening on Decentraland. TrustSwap is nearing its first anniversary, and the project has decided to celebrate in style. To do this, it scheduled a Grand Opening of its new HQ in Decentraland for July 9th. Apart from that, the project will offer free wearables, POAPs, token giveaways, and more.

DeFi project TrustSwap launched almost exactly a year ago. With the project officially being a year old and extremely successful, it wanted to do something special for itself and the community. So, to make this first anniversary unforgettable, TrustSwap announced a grand opening in Decentraland, free wearables, POAPs, token giveaways for top SWAP stakers, and more.

The project’s Decentraland launch event says that TrustSwap is planning to launch a new Decentraland headquarters, and it seems very exciting about the prospect. Of course, there will be plenty of smaller rewards for the community, including the ability to meet TrustSwap’s team.

Most people who have had contact with DeFi or have kept track of the rising projects have likely heard of TrustSwap. The project was originally launched to support different types of transactions in the DeFi space as there was a noticeable lack of a crypto-native service that would do it.

However, TrustSwap quickly started evolving and adding in new services, such as time-locked smart contracts, called SmartLocks. This was followed by farming pools, vesting portals, blockchain-based messaging, and before long, TrustSwap also launched its TrustSwap Launchpad, which has since become its flagship product.

In addition, TrustSwap managed to acquire its largest competitor, Team.Finance, in the second half of 2020, thus removing the greatest obstacle to becoming a definitive leader in the token locks space.

Only a month ago, in June 2021, the project introduced a new product called Mint, which is a unique token generator that allows users to create new tokens without having to do any coding. The new solution will make it much cheaper, faster, and easier to create new tokens without the need to deal with the coding itself or to hire developers who would do it for a large price.

The project also announced the acquisition of The Crypto App, which is one of the most downloaded digital currency apps for portfolio management. TrustSwap wants to help it go even bigger. And, of course, there is the upcoming NFT marketplace, Swappable, which is expected to launch soon after the anniversary.

With its first anniversary here, TrustSwap wanted to do something special, and in style. So, it decided to hold the Grand Opening of the TrustSwap HQ in Decentraland. The event will mark not only the project’s first year, but it will also serve to acknowledge all the hard work that its developers and community did over the last 12 months.

With Decentraland being a virtual metaverse based on blockchain, users get to explore, play, meet with friends, join all kinds of events and other fun activities, and more. The project has already attracted many major names in crypto who have since joined it, including CoinGecko, Binance, and Polygon. Now, TrustSwap will launch right alongside them.

The team has shared a more detailed recap of the last year, as well as additional details about the July 9th events and their schedule in its recent Medium post.

Protect your data and crypto transactions with NordVPN