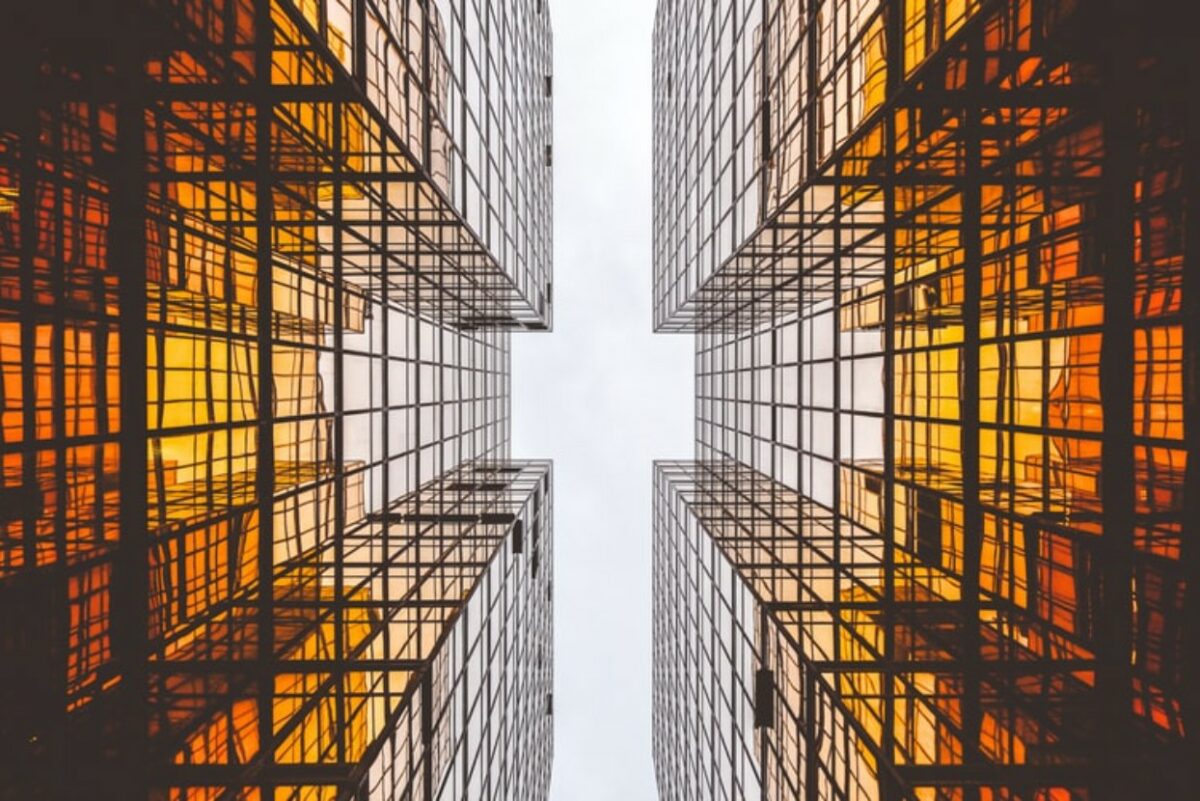 Bitcoin’s price has clearly has not been able to thrive above the $40k level, of late. In fact, at press time, the king coin was valued at $38,335. This essentially points to the fact that BTC’s trajectory is filled with a host of hurdles. Only when it manages to overcome them can its rally actually commence.

In this article, we will analyze a few key trends and conclude with whether or not BTC will be able to pull off a rally over the coming weeks.

Coin Liveliness is a key indicator that is used to evaluate the broader market trend. As such, it is the ratio between Coin Days Destroyed and Coin Days Created. Usually, liveliness increases when long-term HODLers liquidate their positions and decreases when they accumulate or HODL.

Now, as can be seen from the chart attached, this metric has jumped significantly higher over the past few days. This essentially means that old coins are being spent.

However, there is a silver lining to this. The entity-adjusted version has not seen any hikes as such. In fact, it has continued its macro downtrend. When viewed in conjunction, it would be fair to claim that it may simply represent the reshuffling of internal coins of an exchange cold wallet. Hence, the rise in this metric doesn’t seem to be a major concern for now. 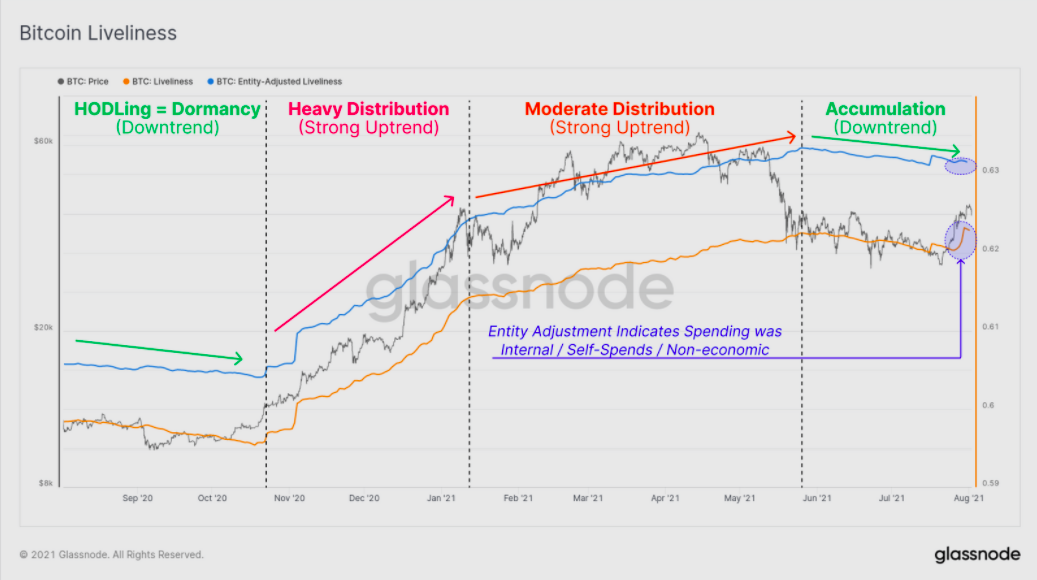 At this stage, Bitcoin’s on-chain activity continues to remain low. As can be observed, the entity-adjusted transaction count was down by 38% when compared to its February peak. To make things worse, the press time levels were equivalent to the 2018-19 capitulation bottom levels.

As a matter of fact, the transaction count over the past few weeks has revolved around the 200k mark. Healthy on-chain activity usually triggers a positive price action. Looking at the current state, however, it can be said that BTC might not be able to achieve higher trading targets, for now at least. 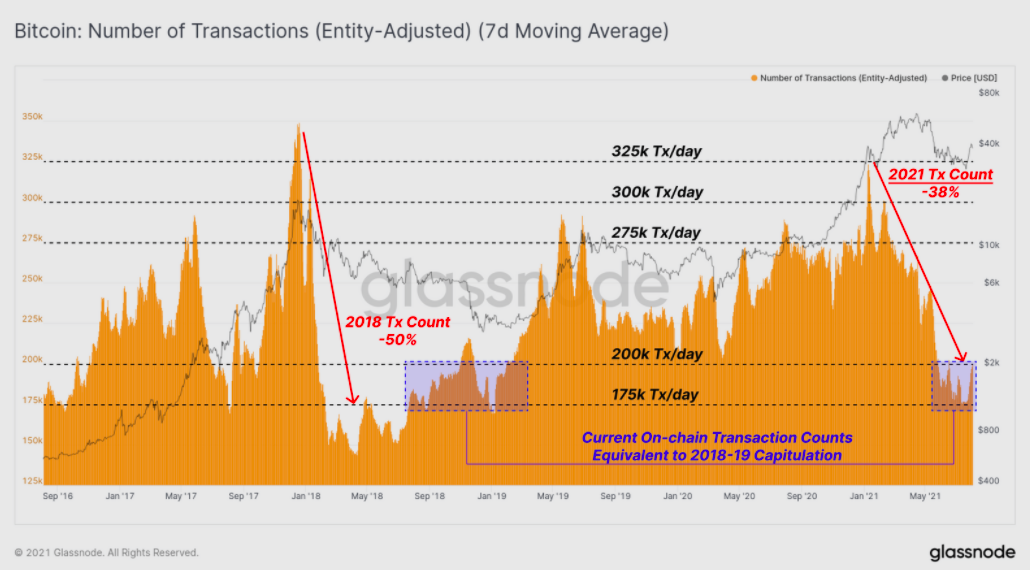 On the brighter side, Bitcoin’s transaction volumes have been spiking of late. It was up by 94% when compared to this week’s lows. To further quantify the same, the numbers rose from $4.7 billion to $9.1 billion this week. Again, both these metrics, in conjunction, suggest that the demand for on-chain block space is dominated by fewer players, but the volume was able to make up for the drop in the number of transactions.

This week, the market also recorded a notable uptick in the number of younger coins. Now, this clearly indicates that a considerable number of old coins were liquidated. Old coins leaving the market is not really a good sign, is it?

Well, during the initial stages of a typical bull market, old coins are spent to take profits, new investors buy them, and the young coin supply increases. Now, even though “disbelief” rallies end up pushing the price down in the short term, they can also be essential to kickstart/trigger a long-term bull run. Interestingly, during the 2017 mega bull run too, newer coins dominated the older coins. 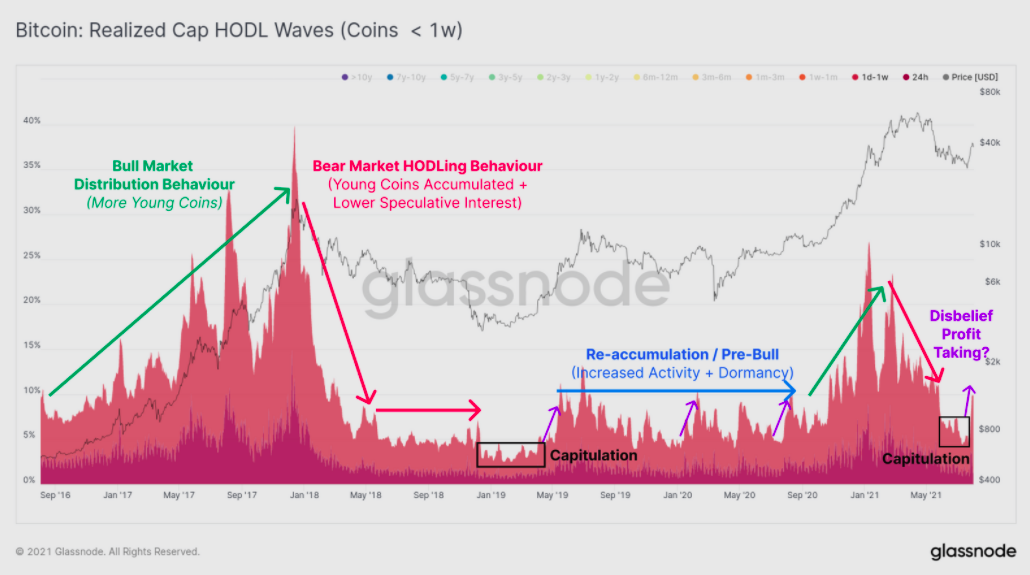 Looking at the state of the aforementioned metrics, it can be argued that the next few days might be quite tricky for Bitcoin. If it successfully pulls through this phase, its bull run will be almost inevitable. However, if it slips down somewhere in between, the correction phase may end up extending itself.