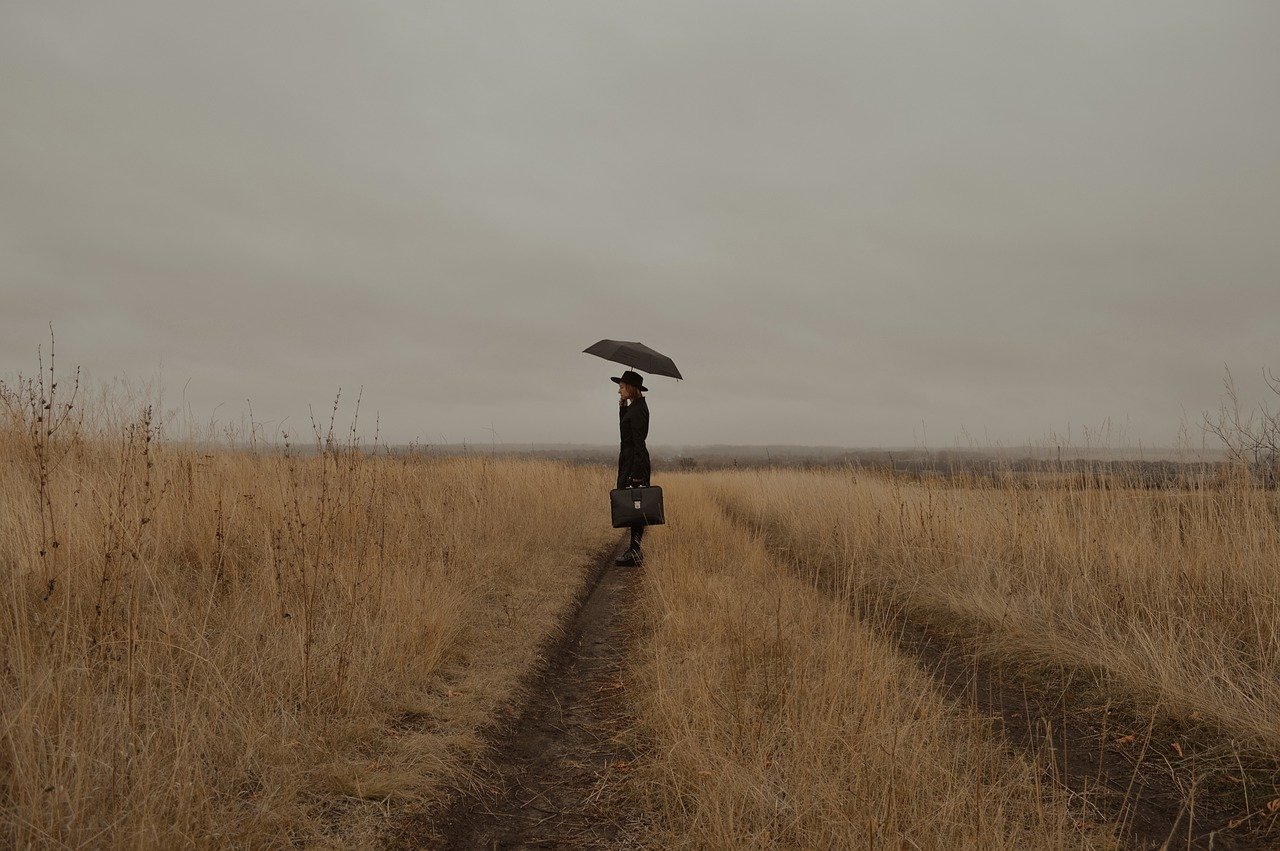 Many central banks around the world are now engaged in some type of CBDC exploration. Time and again, they have claimed that digital currencies could provide far better oversight into monetary movements. Governments that seek to combat money laundering and corruption have all come to the conclusion that CBDCs can help them trace illicit activities.

The popularity of CBDCs has a lot to do with Bitcoin’s recent performances, despite the fact that the two are as different as any assets can be. And yet, one’s popularity has fueled the other, partly because many regulators and countries still see Bitcoin as a tool for illegal activities.

Consider this – A recent study was able to condense the most common destinations to which criminals have sent Bitcoin over the years. These include, 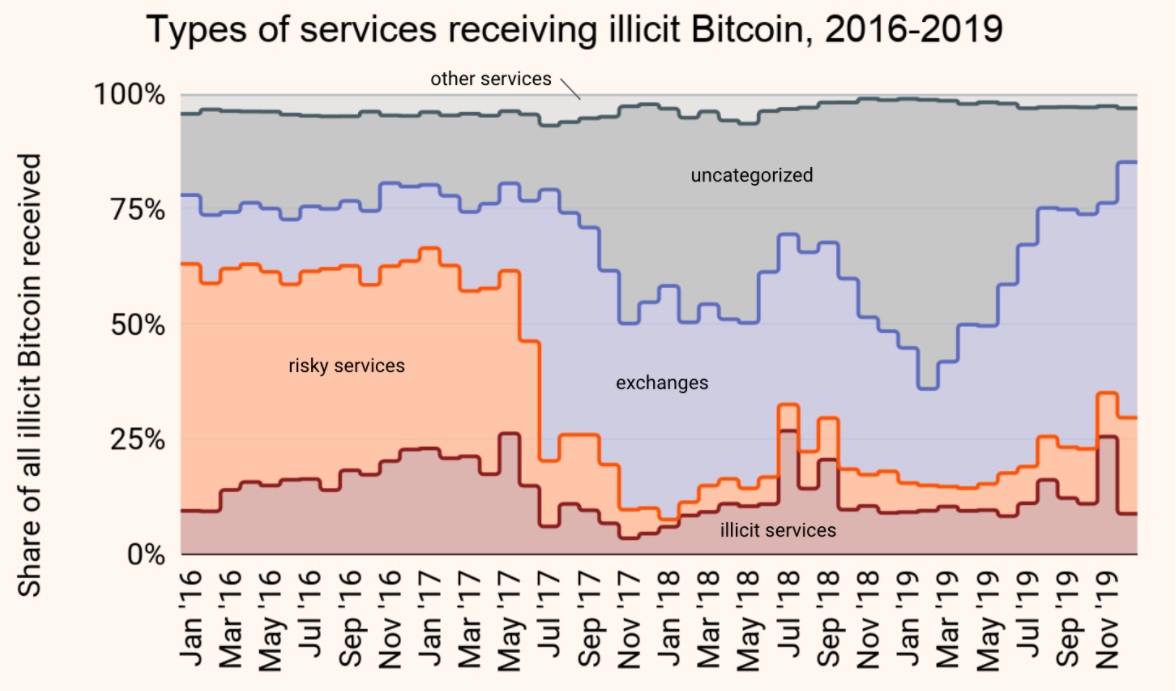 The greater emphasis on CBDCs was also fueled by the COVID-19 pandemic. In 2020, the Coronavirus outbreak forced many consumers to go cashless. Moreover, well before the pandemic struck, cash payment volumes in some regions, such as the UK, were on the decline. On the other hand, digital retail transactions were on the rise. 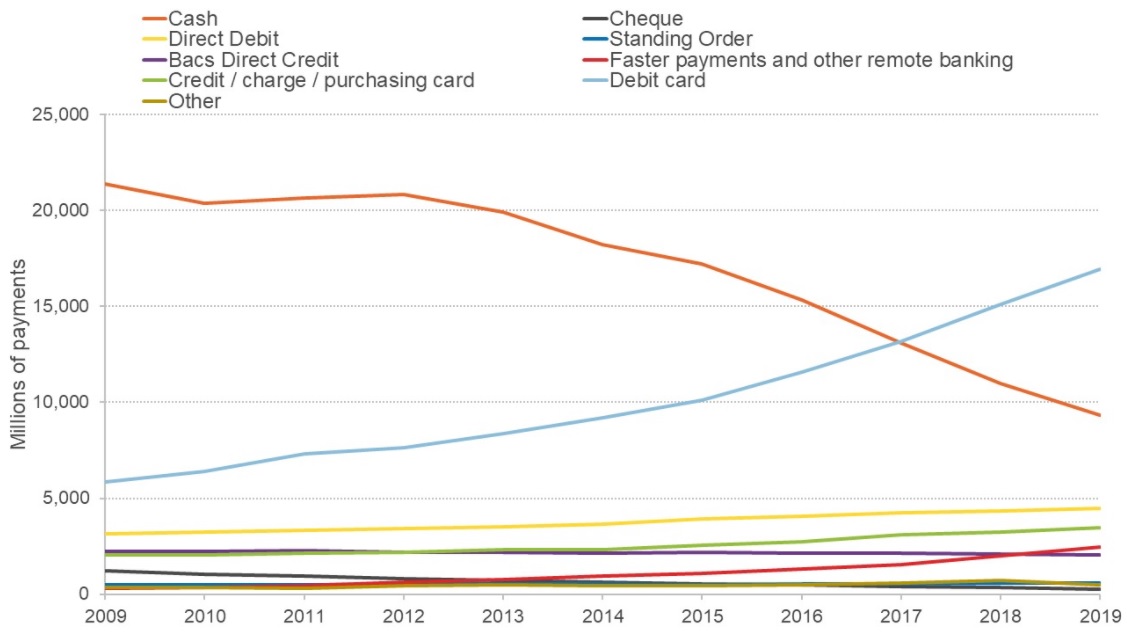 Even the European Central Bank (ECB) found that in order to curb the spread of the virus, many citizens resorted to contactless payments, with retail users investing in Bitcoin and other cryptocurrencies.

However, policy-makers are leaning on this cashless trend to launch their own digital currencies. Moreover, ECB believes that issuing a CBDC could help them “cushion the impact of extreme events — such as natural disasters or pandemics — when traditional payment services may no longer function.”

But, handling extremities is not the only reason why governments want digital currencies.

An instrument of control

Physical cash is hard to trace and difficult to control because its users are anonymous. Bad actors rely on this feature to fund terrorist activities and facilitate smuggling. And while CBDCs allow agencies to monitor the flow of money, it will also give governments a degree of control over its users.

In fact, the use of CBDCs could make financial discrimination worse, with some payment processors likely to carry out the work of governments in order to “blacklist” those who don’t fall in line. This was highlighted by Gab.com founder Andrew Torba recently as he explained that even today,

“If the Communist Party [of China] deems people untrustworthy, they are denied access to plane tickets, train tickets, opening and operating businesses, and more.”

Speaking about how Visa blacklisted his business and his entire family, he added,

“As of June 2019, according to the National Development and Reform Commission of China, 26.82 million air tickets as well as 5.96 million high-speed rail tickets have been denied to people who were deemed “untrustworthy (失信)” (on a blacklist), and 4.37 million “untrustworthy” people have chosen to fulfill their duties required by the law.”

Old habits die hard, and even if governments innovate, CBDC users will be required to prove themselves to the government – to be eligible, and by extension, to be included in the system.

It should be noted, however, that authorities may not always use outside networks to maintain such blacklists. Instead, central banks could implement CBDCs and force users, as well as firms, to conform to party rules, as is likely to be the case in countries like China.

When people begin to use CBDCs to transfer funds to certain nations like Iran or South Sudan, governments will be able to subject them to much more scrutiny and constant data surveillance. Moreover, this could also give rise to stricter KYC requirements, one where the identity of all network participants will be known to the ones in charge.

Central banks can also hire private tech firms to store CBDC user data, albeit, in a centralized manner. They could come to depend on Google or even Apple to streamline payments. In fact, even the Bank of International Settlements has suggested that banks could work with private payment providers to acquire efficiency.

“Alternatively or additionally, a central bank could work with domestic private payment providers to ensure that the domestic payment system is as efficient and fit for purpose as possible.”

However, pooling data on a single server might just be an easy target for hackers, with the Ledger data leak being a primary example. Soon after the incident came to light, some were quick to blame governments’ imposition of AML/KYC norms for such cyber-attacks.

This latest @Ledger breach is horrendous. Names, emails, addresses, phone numbers of so many people in plain sight. This will only happen more often if government's force more AML/KYC upon us such as proposed US rule changes. It just creates numerous honey pots. ??⚠️ #Privacy https://t.co/6ruKH25Fx4

Moreover, according to Michael Lee, a researcher at the Federal Reserve of New York, and Rod Garratt, an economics professor at the University of California Santa Barbara,

“Transactions using digital payments enable firms to capture consumers’ personal data; cash does not. Data are not shared between firms. By gaining exclusive access to data from their own customers, firms may use this information to gain a competitive edge.”

Other than users and small scale businesses, CBDCs could also have a negative effect on private banks. The same was alluded to by the Bank of England’s Deputy Governor Jon Cunliffe after he said that England’s central bank would not ensure that mainstream banking business would remain relevant or not – when future digital currencies launch.

When CBDCs do arrive, the biggest loss will be the privacy of its users, many of whom might just look for digital alternatives such as privacy coins to protect themselves.

Many have argued that CBDCs could boost Bitcoin adoption. In November 2020 alone, the monthly global Bitcoin-related search volume was a whopping 8.9 million. This was 356% more than the asset’s search volumes in December 2017, according to new data,

Some of the top are things like "bitcoin price", "what is bitcoin", "bitcoin news" and just "bitcoin" by itself.
/2 pic.twitter.com/aTmhkJstEz

This may be true, but as Bitcoin becomes more mainstream, it could make government agencies more vigilant about the blockchain. What’s more, this could usher in new use cases for privacy coins. Perhaps, privacy coins could become the new anonymous physical cash – and may even complement CBDCs – and Bitcoin as well.

While regulators seem to be gradually favoring Bitcoin, at least over other cryptocurrencies, they have not been supportive of privacy coins. Several nations have imposed bans, while others have restricted access to them. In fact, many imagine that governments will soon be able to suppress privacy coins too.

For example, Japan believes that privacy coins could facilitate money laundering. In fact, following the CoinCheck hack, regulators in Japan moved to ban cryptocurrencies that offered a degree of anonymity.

The United States has not banned privacy coins, to date, but they have not offered any regulatory clarity about it either. Heck, Homeland Security even intends to work on technology that would enable it to trace Monero (XMR) transactions.

And, it’s not just the United States. Russia’s Rosfinmonitoring plans to monitor illicit activities by tracing Monero, Dash, and transactions of other cryptos due to their anonymous nature. Even crypto-friendly South Korea announced its decision to make service providers delist privacy-centric coins.

Even if bans restrict mainstream access, privacy coins will still continue to exist, and so will the marketplaces to trade them. In fact, a study found that regulators seeking to ban privacy coins will find it difficult due to the decentralized aspect of the coins. Researcher Rob Gleasure from Copenhagen Business School said,

“If decentralized privacy-preserving cryptocurrencies become popular in the future, to the point they can be routinely exchanged without users having to convert to other currencies and systems, there is no obvious way for regulators to impose post-hoc regulation.”

The researcher also predicted another outcome, one where governments could see privacy coins in a new light. “Much like how users are starting to realize the nefariousness of Facebook and Google,” he claimed.

According to a proposal presented by Justin Ehrenhofer, a community lead for Monero, the best way government agencies like FinCEN could collect information needed for their monitoring and investigations was,

“To encourage adoption of these privacy-preserving crypto on regulated exchanges to collect KYC at onboarding.”

He believes that privacy-focused cryptocurrencies are being used “far more frequently” than they were a year ago, adding that that use of privacy-preserving tools was increasing even on Bitcoin and Ethereum,

Interestingly, even some CBDC projects have said that they are “exploring anonymity” to offer “some degree of privacy,” depending on the transaction size. In fact, according to the ECB, their proof of concept demonstrated that it was possible to,

Additionally, Litecoin (LTC) is well on its way to add privacy features through its ‘Mimblewimble’ network upgrade.

However, leading exchanges have still not listed privacy coins like Monero or Zcash. In fact, Coinbase CEO Brian Armstrong has said,

“Privacy coins are the next topic, one of the next on the horizon, among many. [The regulators] are very concerned, so we haven’t been able to list it at least in the way we want for those reasons. But, I think with enough time and vision, the regulators will be comfortable with that. Then, there will be another new issue on the horizon that will concern them.”

In such a scenario, the need for guidance is urgent, with Monero and Tari Labs planning to soon publish a whitepaper to help exchanges list XMR and keep up with regulations. Louis Willacy of Tari Labs said,

“While the authors support their findings with exhaustive research and detailed analysis, the whitepaper’s core conclusion is deceptively simple: Regulated financial institutions can comply with AML obligations when supporting privacy tokens. Period.”

Monero, a cryptocurrency that started out as a contender for the top-ten, now holds the 16th rank on CoinMarketCap. Dash and Zcash rank lower on the crypto-ladder. This is a sign of the popularity of privacy coins somewhat waning. However, in terms of hash rate, Monero remains close to its all-time highs. In fact, one can argue that XMR has grown, “despite limited exchange support,” according to Justin Ehrenhofer.

To date, there have been 536,663 Monero transactions this month seen in the image below, 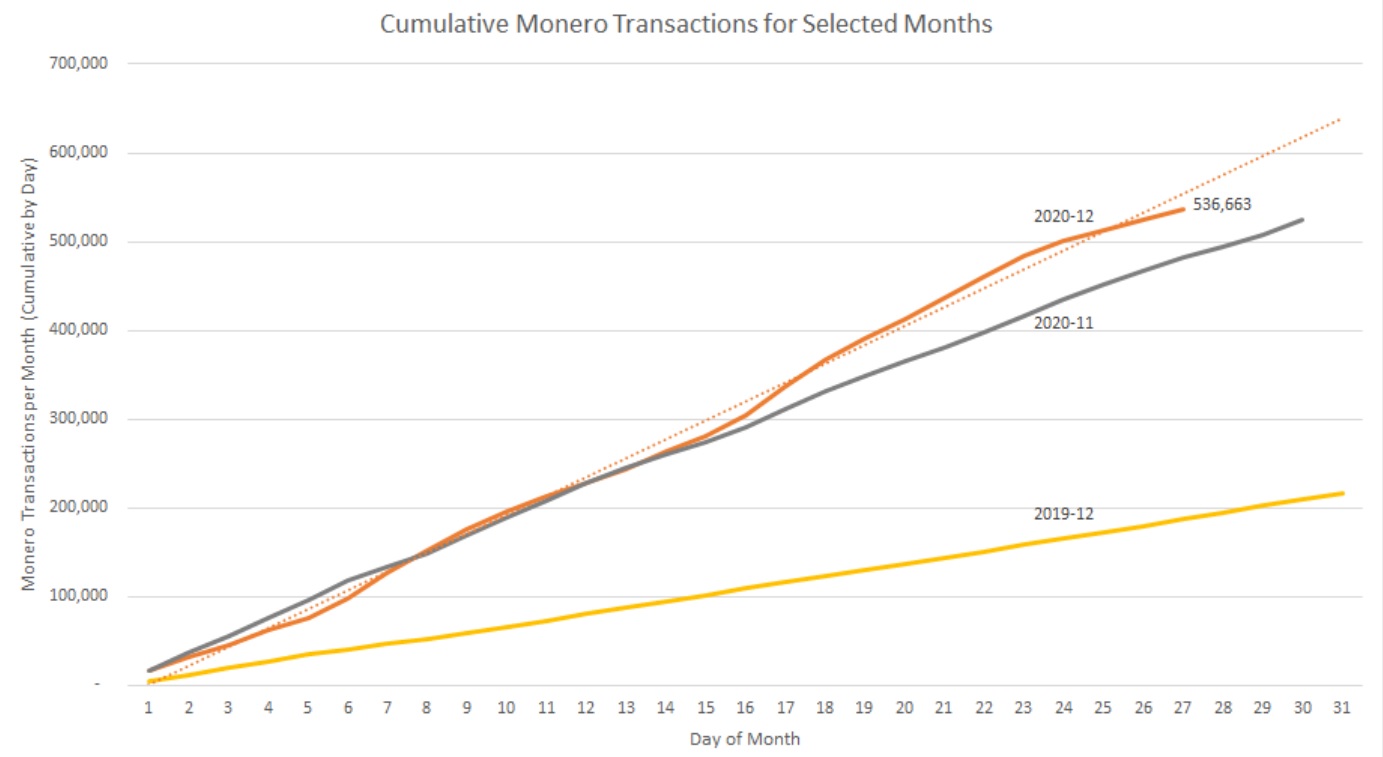 As many experts have noted, when people realize how centralized CBDCs can be, financial communities might begin to take privacy-focused projects seriously. Ultimately, demand for privacy coins could soar, at least among affluent classes or corporations, if not among everyday retail users, much like how Bitcoin seems to be attracting institutional investors now, even though some entities never thought they would want any BTC exposure.