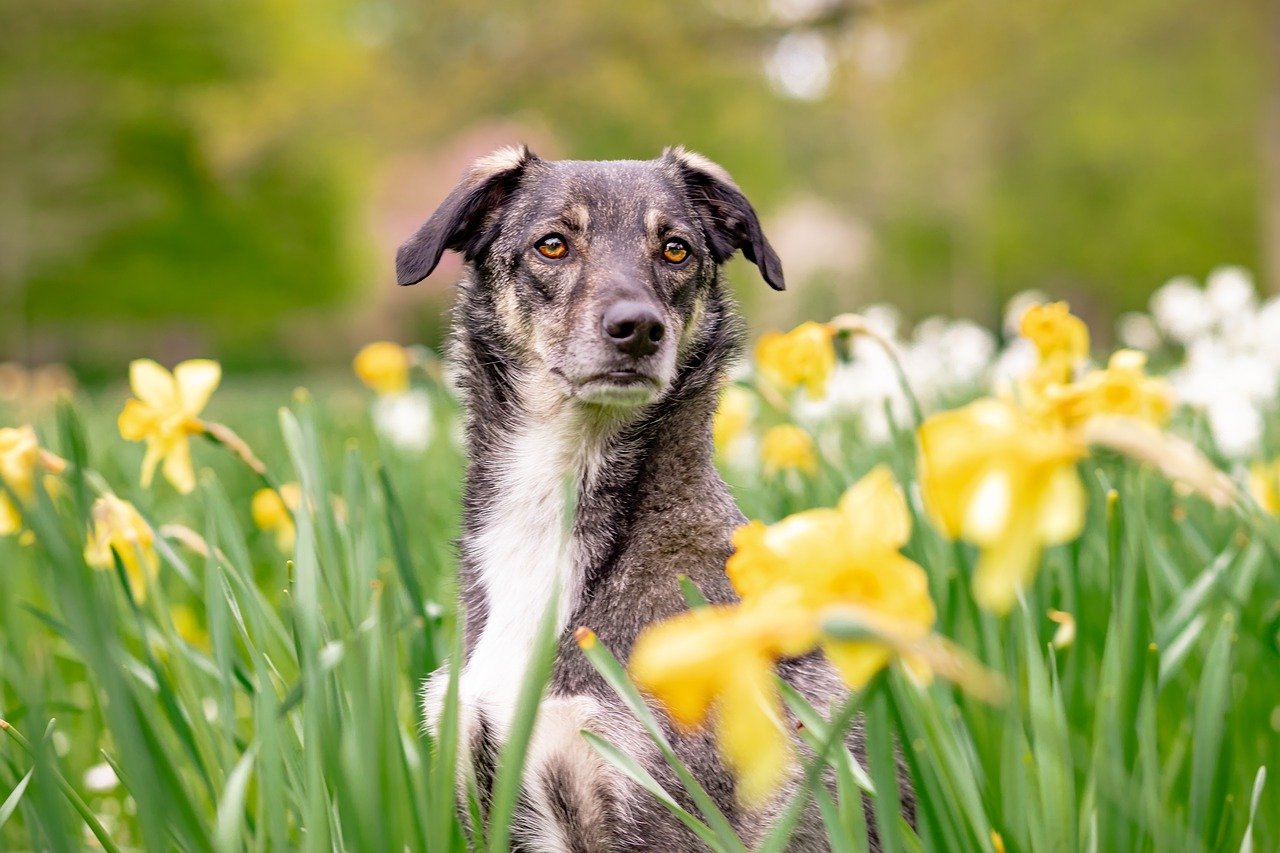 XRP traded within a symmetrical triangle and a breakout was possible in either direction. Dogecoin highlighted a few additional support levels in case of a breakdown from $0.309. Finally, Cardano was tipped to break above its ascending triangle and $1.83 resistance over the coming weeks. 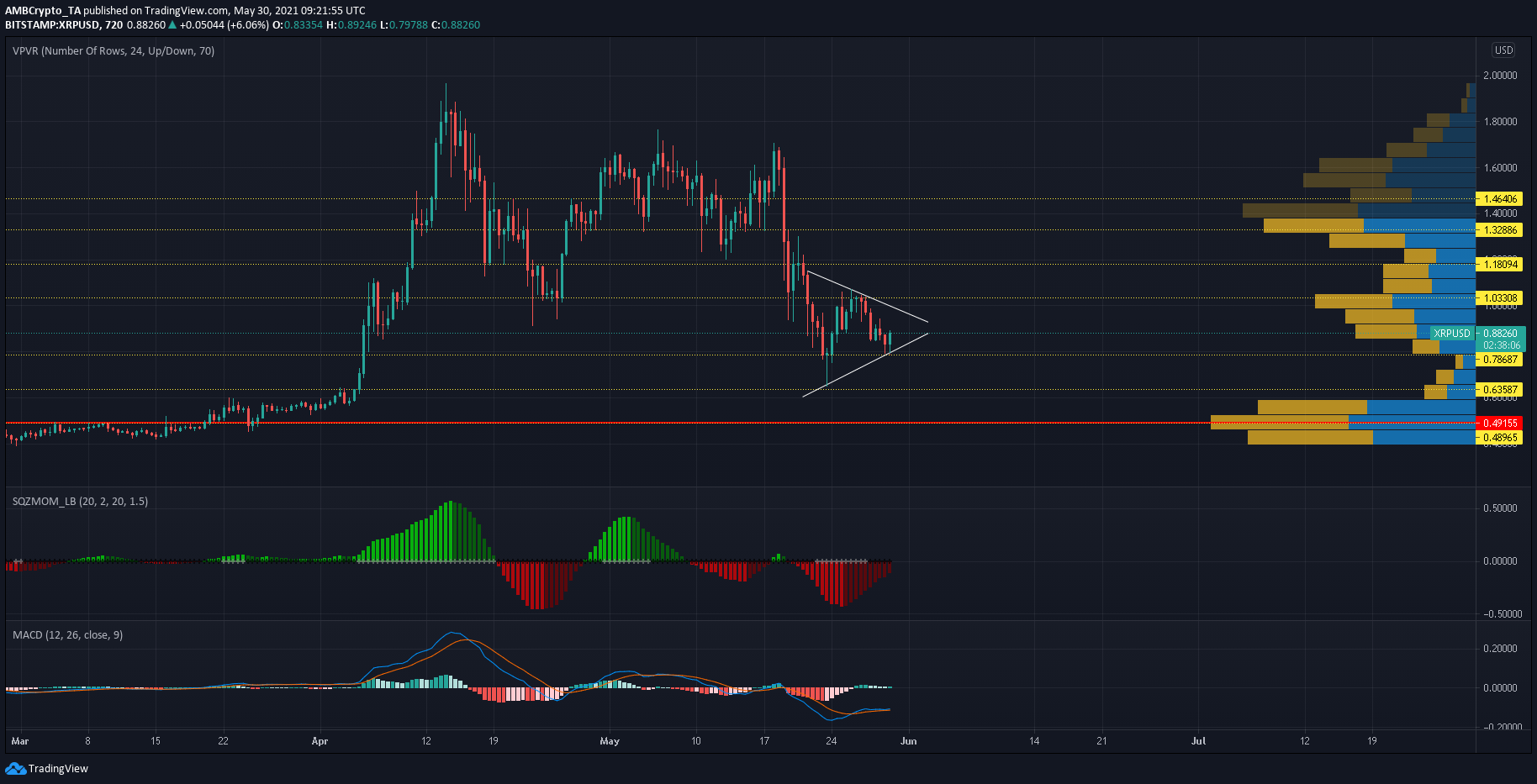 A symmetrical triangle was spotted on XRP’s 12-hour chart which presented two possibilities moving forward. If XRP’s downtrend prior to the formation of the pattern is considered, a breakdown was likely. This outcome could trigger a 20% retracement towards $0.635. On the other hand, a break above the upper trendline could result in a rally towards $1.03-$1.18. An extreme bullish outcome could see gains all the way up to $1.32.

However, broader market cues would likely dictate the direction of a breakout moving forward. According to Squeeze Momentum Indicator, bearish momentum has been on a decline but this could mean further consolidation within the pattern rather than an immediate bullish breakout. MACD was well below the half-line, but the fast-moving line maintained above Signal line.

Dogecoin’s pullback in late April led to the emergence of a support line of $0.239 and the same might be called into action in case of a breakdown from $0.309. A sharper pullback would highlight defensive zones at  $0.146 and $0.08- levels last seen in April. OBV’s downtrend highlighted the dearth of buying pressure over the past few days.

Lack of strong volumes across exchanges led to weaker price action, as opposed to those levels seen during early May. While it was possible that DOGE could be in accumulation, buyers would likely reenter at slightly lower levels considering the demand zone between $0.146-$0.08.

Awesome Oscillator’s movement suggested that selling pressure was once again on the rise. 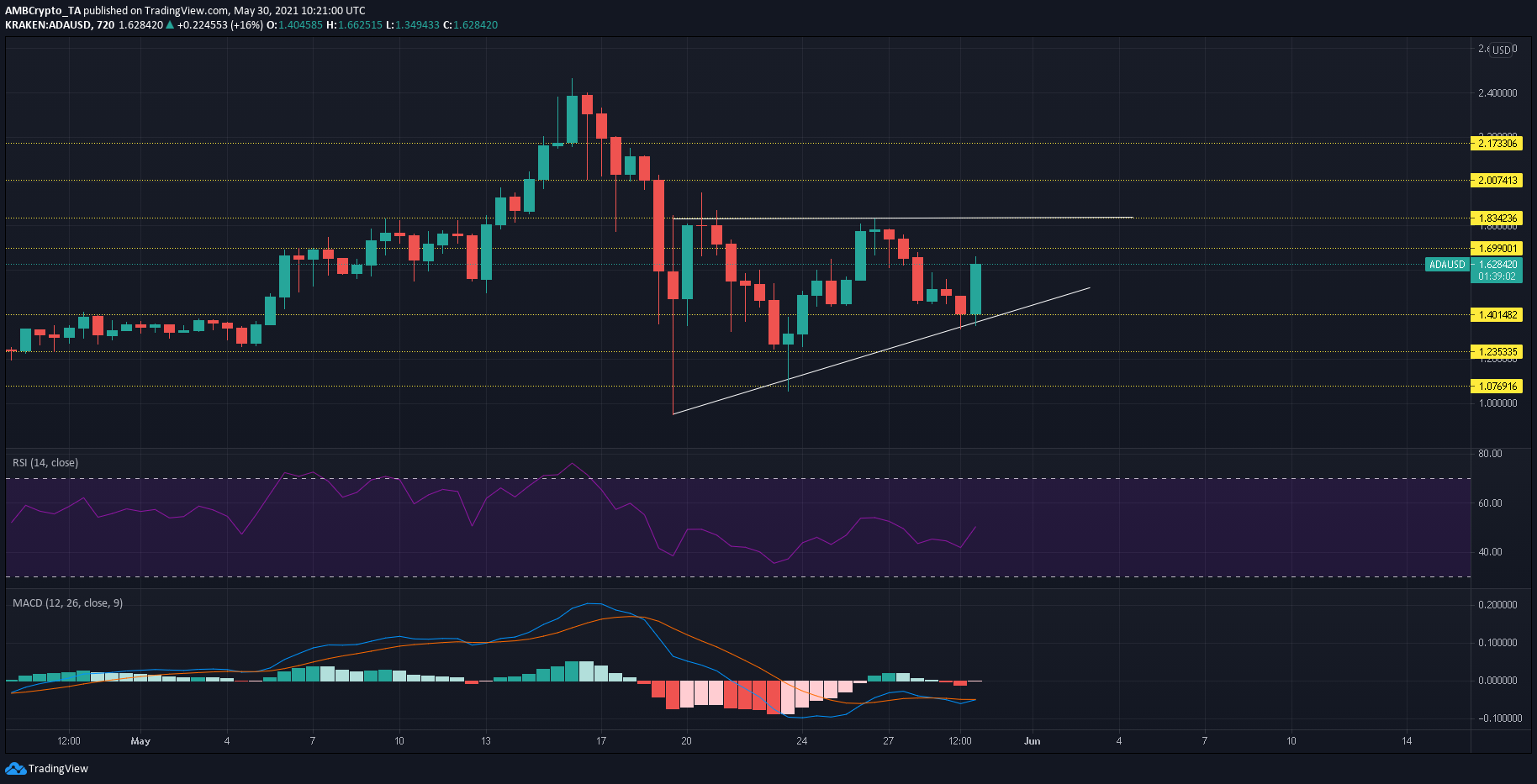 While Cardano has been unable to flip $1.83-resistance despite seeing bullish periods, the cryptocurrency made a few important developments. Lower highs observed on the 12-hour timeframe showed the formation of an ascending triangle which is considered a bullish pattern. In case of a breakout, ADA would likely see a hike towards record highs. On the flip side, a breakdown could drag ADA towards $1.

MACD was on the cusp of a bullish crossover and such a development would see ADA defend a breakdown. RSI was in neutral territory around 50.

This is a bitcoin hindrance that could ‘surprise people later’