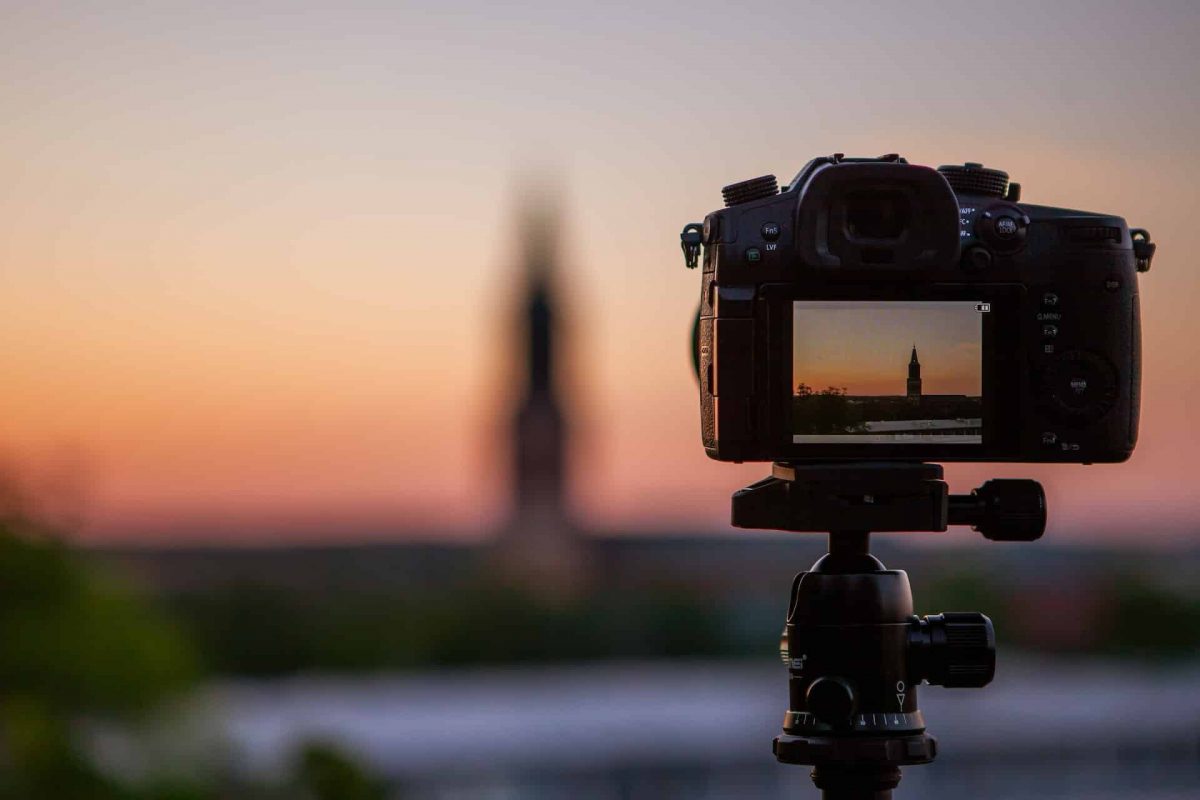 Self-acclaimed future of finance, Quant [QNT] has had quite an interesting year since it conquered flat market conditions. Between June and August, the QNT price surged from $48 to $124. A few months later, with the crypto market in a severe decline, QNT more than doubled in value, hitting $208, on 18 October.

This trend would have been impossible without the actions taken by addresses that held 1,000 to one million QNT. According to the latest Santiment report, the assets held by these whales had dropped from 80% to 72%. An explanation meant that these whales had probably taken profit while leaving the rest of their holdings for the long term.

What’s in it for the QNT price?

In more intriguing updates, QNT had been able to recover from its seven-day decrease. According to CoinMarketCap, QNT was trading at $120 at press time.

This indicated a 2.45% uptick in the last 24 hours. Moreover, the coin’s volume increased by 54.59% within the same period, according to information from on-chain analytics provider, Santiment.

So, since QNT sustained an increase, would it be able to continue to weather the crypto bear market?

As QNT has not suffered losses like its counterparts, the four-hour chart showed that it had the potential to replicate its June to August and September to October performance.

This was because the Exponential Moving Average (EMA) revealed that short-term respite was likely. At the time of writing, the QNT 50 EMA (yellow) was positioned below the 20 EMA (blue).

Although slight, the trend indicated a possible bullish crossover. So, QNT had the prospect to take the performance to the close of the year.

Even though QNT was 71.47% down from its all-time high, the 200 EMA (purple) showed that the coin could take the bull action into the first quarter of 2023.

Against the U.S Dollar, Quant’s direction indicated a struggle for a short squeeze and buying power. However, indications from the Directional Moving Index (DMI) exhibited uncertainty about the specific direction that QNT advances. 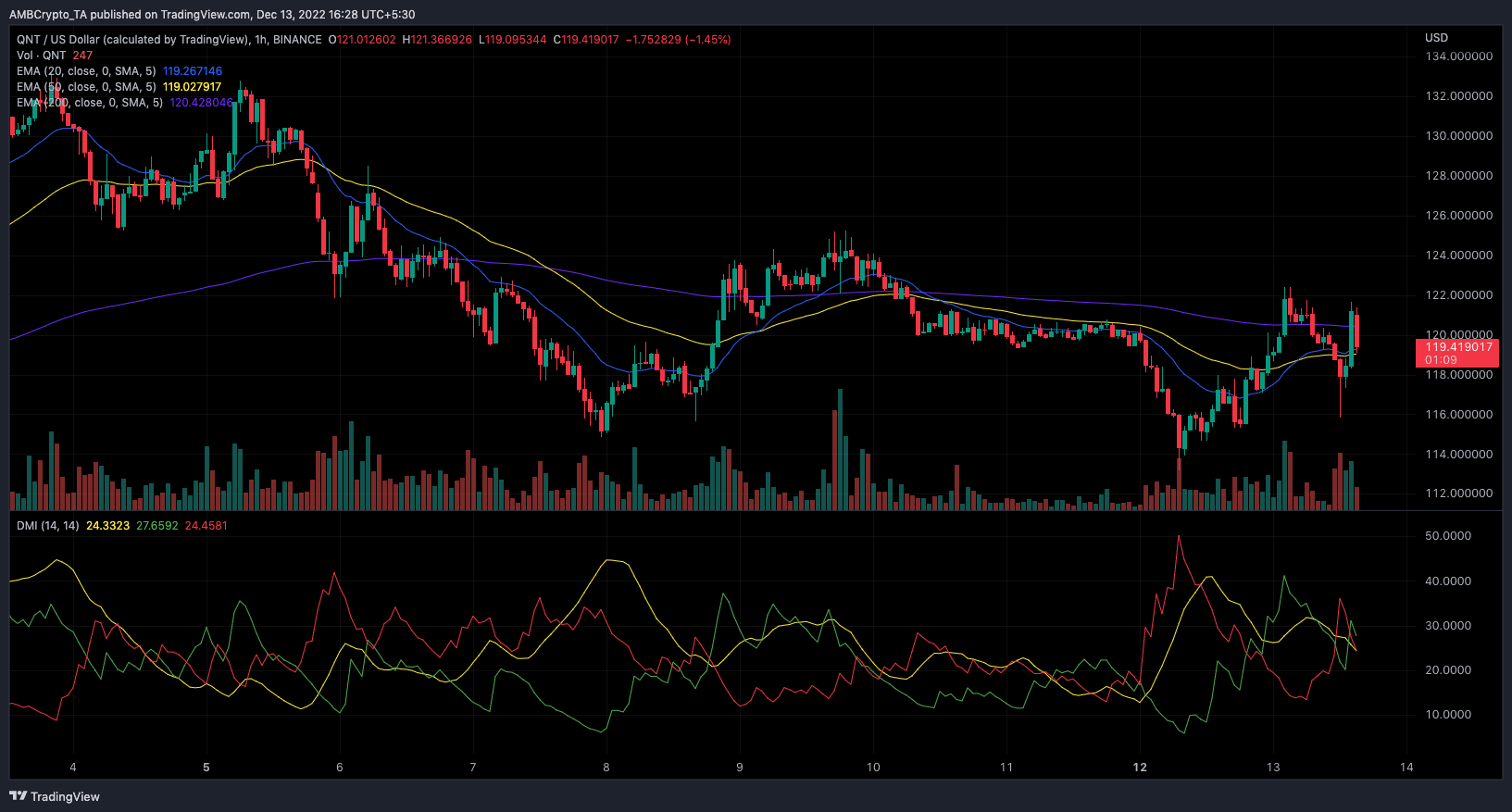 From an incredible rise on 12 December, Quant fell to a lull intensity per its development activity. According to Santiment, the QNT development was 0.1.

This was in contrast with Quant’s earlier commitment to continually polish its network.

Historically, the development activity hardly impacted its price. So, an upturn in developments or down would most likely have less impact on QNT going forward.

In terms of velocity, Glassnode revealed that QNT units found it difficult to circulate around its network. Therefore, QNT might need to improve its on-chain transaction volume if there was any chance of confirming an excellent performance towards the year and the next first half. 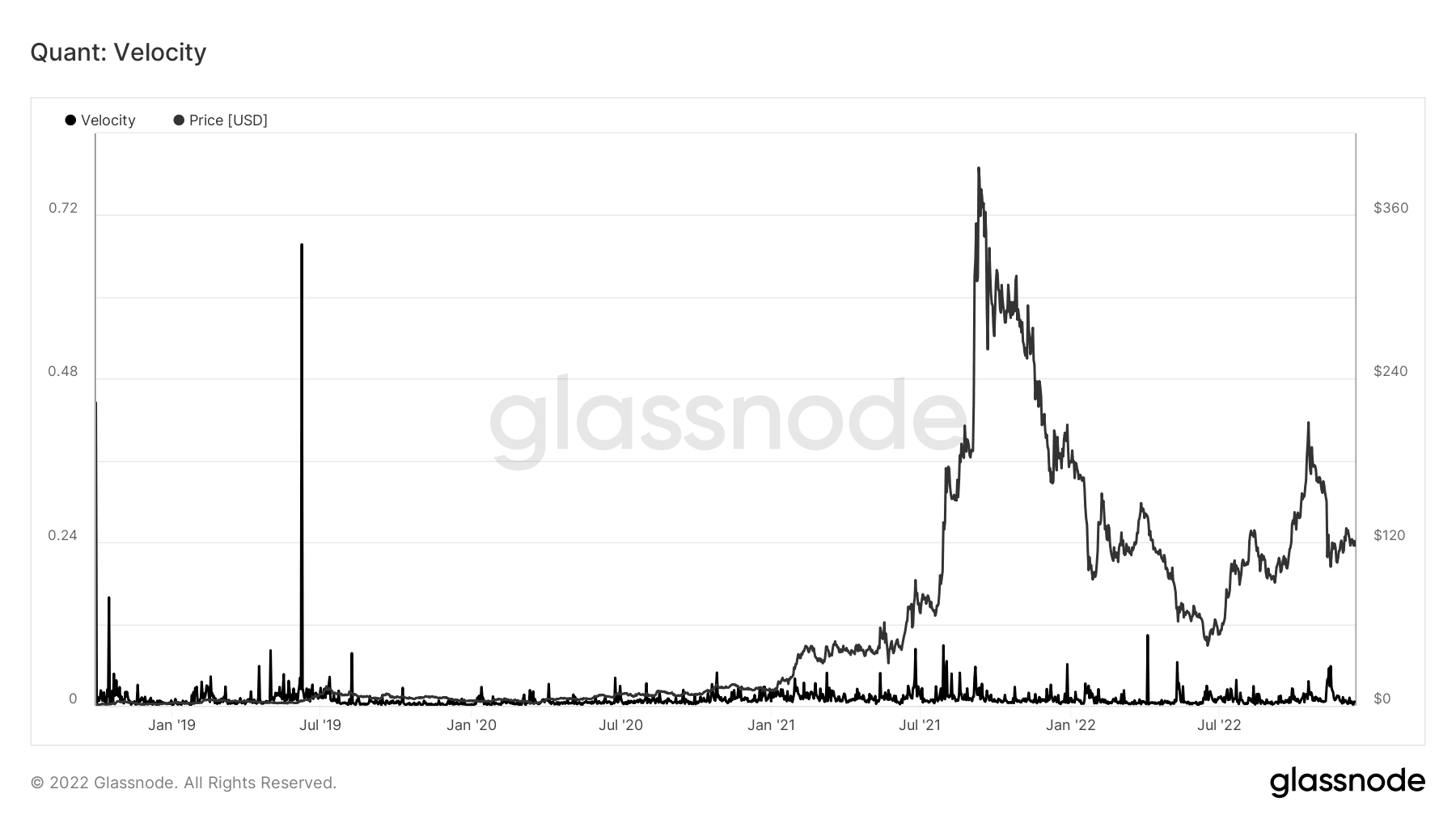 What are the odds of Chainlink [LINK] crossing its near-term high this week?