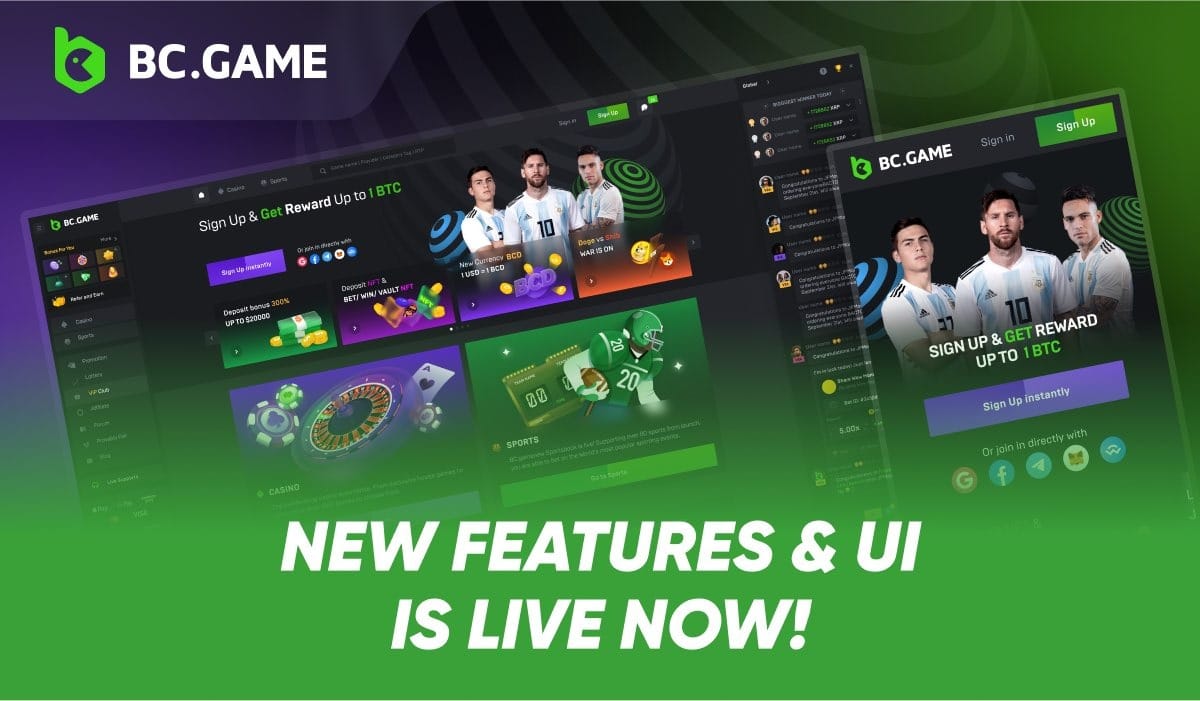 BC.GAME announced the official launch of its new website, integrating better features and advantages for its users.

Named the Crypto Casino of the Year, BC.GAME is one of the most popular crypto casino platforms. Now, to provide a better experience for users, it will launch a redesigned website, giving its players the best experience and satisfaction worldwide.

In addition to the release, BC.GAME signed two new partnerships with AFA and Cloud9.

BC.GAME’s new website will have a new UI layout, with a cleaner and slicker aspect compared to the old version.

At the same time, the new website will allow players to select different languages for the interface, translating the descriptions for a better understanding. The new languages available on the website will be Portuguese, Indonesian, Russian, Vietnamese, Korean, and Spanish.

Furthermore, BC.GAME recently signed new partnerships with two of the most recognized names in football and eSports — AFA and Cloud9. These will be displayed on a special page dedicated to sponsors. This particular section is designed so the community can stay updated about the latest events involving the casino’s partners.

One of the most critical aspects of the new BC.GAME website will be its updated security. With new security characteristics such as a new Official Staff Verification page and an updated KYC feedback feature, players can now enjoy a better and more secure casino experience.

Moreover, users will now access helpful content thanks to the new design, including game recommendations specific to each user, information about the game developers, and game descriptions.

Chris, Chief Operating Officer at BC.GAME shares his thoughts about the new updates on the BC Game website: “The iGaming industry moves fast. Keeping up with it is no small feat. As industry trailblazers, we pride ourselves on doing more than just staying ahead of the curve. Our goal is to create the curve. The only way to accomplish this is by keeping the communication channels with our community open. On behalf of the BC.GAME team, I would like to thank our loyal community for all the feedback and suggestions they gave by presenting this latest upgrade.”

BC.GAME is a community-based crypto casino that aims to provide its users with a distinctive and high-quality experience. Launched in 2017, BC.GAME is among the first casinos to support Lightning Network, revolutionizing the casino industry and the blockchain space.

Users now have access to more than 10,000 games, including sports, slots, live table games, and even the well-known Bitcoin (BTC) crash game, thanks to the recent addition of sports betting. BC.GAME was named the Crypto Casino of the Year 2022, thanks to its numerous awards from the industry. The platform now accepts fiat payments in addition to several popular cryptocurrencies.

More information about the launch and other services provided by BC.GAME is available on the official BC.GAME website.

Zoksh: A revolutionary Web3 payments system that is easy to use and affordable