From $7,301 to $20,000, Bitcoin has seen it all in the past year. From regulatory ring-fencing, rejected ETFs, and seized Bitcoins, to hacks and thefts and the shutting down of several exchanges, it has been a wild ride in the truest sense.

Yet, over the last 12 months, retail traders and HODLers have kept at it, through the Bloody Thursday in March to the first ATH this year when the price crossed $19,800. There have been many surprises too, however, something that wasn’t unexpected since the past few weeks saw Bitcoin touching highs it hadn’t seen since the heyday of the 2017 bull run.

Despite the fact that the trade volume has dropped on a few occasions, network momentum and volatility have largely sustained themselves, backed by consistent demand generation on spot and derivatives exchanges both by retail and institutions.

In fact, institutional traders played a more instrumental role in the current price rally by fueling enthusiasm with regular and systematic buying, some instances of which led to the previous price rally that took BTC beyond $19800. Guggenheim’s interest in investing over $530 million through GBTC and Grayscale’s consistent buying of Bitcoin at a price level even above $18,000 has set an example for retail traders.

In a recent interview with CNBC, the Winklevoss twins had said that they are positive that a ‘Gold flippening’ will occur and the price of one Bitcoin will hit $500,000, adding that all they did in the past 8 months was HODL. Bitcoin’s high correlation with Gold in the second half of 2020 gave investors the confidence to pursue this “digital gold” narrative and, despite the massive drop in correlation, institutional traders have continued buying and generating enough demand for the price to hit a new ATH.

The “Digital Gold” narrative got a further push with the performance of Bitcoin as an asset class, compared to Gold, U.S Real Estate, Bonds, and Stocks. Ever since Bitcoin decoupled from Gold in November 2020, it has recorded an RoI of over 170%, while Gold’s ROI was just 15.5%.

It is important to note here that the present price rally has led to increased liquidity and for the price to climb higher, in previously unchartered territory, it will take higher demand on exchanges. The supply on exchanges needs to be met with demand generated at a faster pace for the price rally to continue. The supply shortage is now dwindling, with an increase of 32.5% active supply and this is the highest in over 3 years. Institutions are generating demand, however, retail participation is crucial for the price rally. 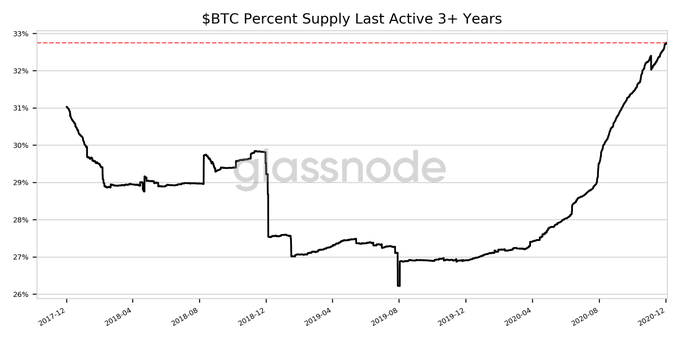 The active supply of spent Bitcoins from HODLer wallets that were inactive for 3+ years has increased substantially. There has been an increase in trade volume on exchanges but, so far the outflows haven’t increased. However, if outflows from exchanges increase, there may be a correction in the price on spot exchanges.

Related Topics:bitcoin athfeatured
Up Next

Why Ethereum and XRP dominated the altcoin rally in 2020