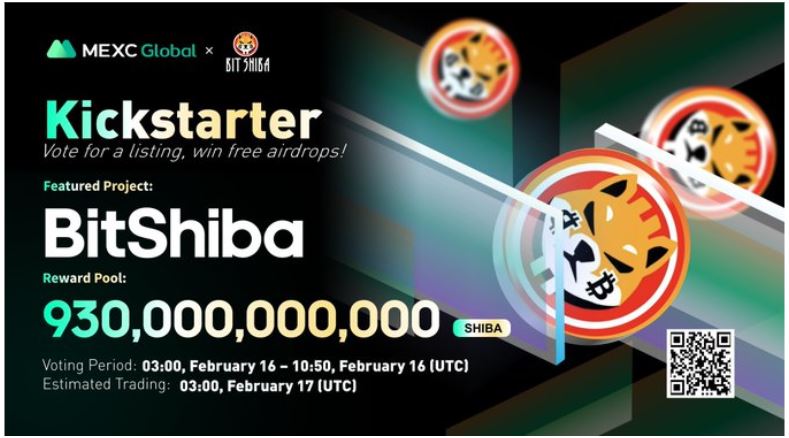 The Bitshiba team is pleased to announce the release of its no-minting fixed-supply token $SHIBA. Unlike other coins such as Bitcoin, Bitshiba requires no minting as “all tokens that will ever exist have already been created,” according to the team.

The team went further to explain that “50% of all Bitshiba tokens were added directly to liquidity on Pancakeswap and the remaining 50% were intentionally destroyed forever by sending them to the 0x000… burn address. DEX Liquidity is locked until 2099. The Bitshiba community controls 100% of all tokens.”

Users are welcome to a listing voting session codenamed Kickstarter with free airdrops between 03:00, February 16, 2022, to 10:50, on the same day. Votes will be done with $SHIBA to vote in favour of getting $SHIBA listed.

While explaining the rationale behind the voting exercise, the team noted that it is excited to launch a session of Kickstarter, a listing campaign initiated by the project team before launch where users can stake tokens to vote towards a predetermined goal.

Once the team hits the goal, the listing process will start and free token airdrops will be arranged for participating users prior to the listing.”

How to Join Kickstarter?

If you are eager to join the voting process, you can participate in the Kickstarter by staking $SHIBA tokens and stand a good chance of winning free airdrop projects.

Your spending power and the amount of $SHIBS you can own is a function of your Spot Wallet’s balance at the snapshot time.

According to the team, the tokens used for voting will be locked temporarily while the event lasts. They will be unlocked shortly after the event’s conclusions while users have unlimited voting chances before the end of the voting period.

Within an hour of the voting, participants will receive airdrop rewards distributed proportionally according to the total votes.

Participants should note that participating in the Kickstarter event is free. However, they must complete the Know Your Customer verification exercise before the event ends, a requirement for eligibility for the rewards.

The team will announce the listing details separately. The targeting voting rate is 500% and the voting rate is calculated as Total votes/total value of rewards.

Only projects that hit the 500% voting rate will be listed.

How to Buy Shiba