Blockchain Gaming is on the verge of a scalar shift, courtesy of Cocos-BCX

Blockchain Gaming has been the coming of age of two divergent industries. Gaming has seen the rise of a revolutionary foundational system, one that moves on from a single limited gaming-verse to one that can be built based on the preference of the users. Blockchain has seen an outgrowth from the overarching shadow of the cryptocurrency world and now resurfaces as a revolutionary distributed system of its own.
Cocos-Blockchain Expedition or Cocos BCX is looking to spearhead this dichotomy of technology and competition to bring a never-before-seen system of gaming via the blockchain. A platform for developing decentralized applications [DApps] and in-app digital assets via the blockchain, Cocos is looking to develop an ecosystem with a plethora of games and provide freedom to developers in order to herald the complete gaming experience.
Having over a decade of experience in the gaming world, Cocos aims at building on that expertise in their blockchain venture. Originally formed in 2008 as a game development engine for mobile applications, Cocos supports all forms of game development, PS4, Xbox One, and PC. Over the years top-notch game developers including EA, Zynga, Ubisoft and more have been customers of their engine.
Dominating markets in Asia, South America and Eastern Europe, Cocos notches up over 1.3 million developers worldwide. As the gaming world soon became a mainstay on social media platforms, Cocos began to transition. In 2018, the Cocos Tools and Engine took the top spot in terms of utilization rate on Facebook and WeChat respectively.
Their public blockchain is titled CocosChain and operates on Graphene a Delegated Proof of Stake [DPoS] system which can support quick transactions on the network. Smart Contracts on the system will be created via a Visual Integrated Development Environment [IDE] so that developers can follow a seamless path and the game engine will allow interoperability among other public blockchains.
Cocos has put a significant emphasis on placing importance on “light-weight” product structure, to allow a host of platforms the ability to support their service. The platform places importance on being open-source, providing a free and equitable environment for game development which acts as a catalyst for the growth of small and medium sized team to curate lightweight games, while still maintaining the threshold of high speed, high quality, and low cost.
Industry cost also portrays the economic viability of the Cocos ecosystem. Engineers proficient in the BCX space cost companies’ 38 percent less than your average experienced Unity engineer. In the highly competitive Chinese gaming market, Cocos takes the top spot in game engines, holding 45 percent of the mobile gaming market and over 50 percent of the instant gaming market. With the Chinese mini-game market turnover looking to post $3 billion in 2019, Cocos looks to plant a foothold.
With the launch of the Cocos TestNet program in December 2018, the platform also set up a Developer Program offering 30 spots to Chinese developers to test on the Cocos-BCX TestNet.
Several top companies like Huawei, OPPO, VIVO, Samsung have voiced their support for the instant gaming industry, adding further impetus to the Cocos project, with their engine supporting these companies’ products. Cocos has managed to ink partnerships with a multitude of companies across a range of spectrums. Platforms partnered with Cocos include, Tencent, Facebook, Google, Microsoft, Samsung and more, the International Developers integrated are Nintendo, Line, Miniclip, and Bandai Namco.
Given this strong foundation in every section of the gaming industry, Cocos veered into the Blockchain realm in 2017, primarily for two reasons. Blockchain Gaming is a diverse field, a specialist would be out of their depth in this field, but Cocos with its expertise of “preliminary preparations” and enormous technical know-how of the gaming world, can handle the waters.
Secondly, with the transition of the gaming world to an asset-based system with the ecosystem of the game in question, Cocos’ revenue model is propelled by the system of subscription where in-game props will hold tremendous value and importance. This system has formed the backbone for many notable games like Fortnite and Playersunknown Battlegrounds [PUBG].
Games built to mimic an economy need to be woven with an intricate blockchain system, one which Cocos BCX fulfills on two fronts. The platform introduces the principle of high system response and trustable randomness that has already been successfully implemented on Cocos Shooting and Happy Fruit on the platform, with certain elements within the game executed via smart contracts.
The blockchain will also see the use of a native token, titled the COCOS token. This token will be used as a medium of exchange for rewards, payments, and trading, to adhere to the DPoS thereby staking on the chain, and for voting on Cocos-BCX. The platform has confirmed that these tokens will be ERC20 tokens with 100 billion offloaded on launch, Acquisition will be on the basis of rewards, on completion of community tasks, sign-ups, trials and block production on the CocosChain. The platform has confirmed that no public sale of the tokens will be made.
Cocos-BCX operates on the surface of a four-layer approach to its architecture. Firstly, the Application Layer, which is the most external-facing and will host the actual game and the exchange built-in. Below the application layer will be the Integrated Runtime layer hosting the three application programming interfaces, Account, Balance, and Game Data. The operations between the two layers will be disseminated via JavaScript and Local Lib. The third layer will be the Contract Layer, with a contract interpreter. The final layer, hosting the core Blockchain Infrastructure will host the Database, Account History and Network information in an API. 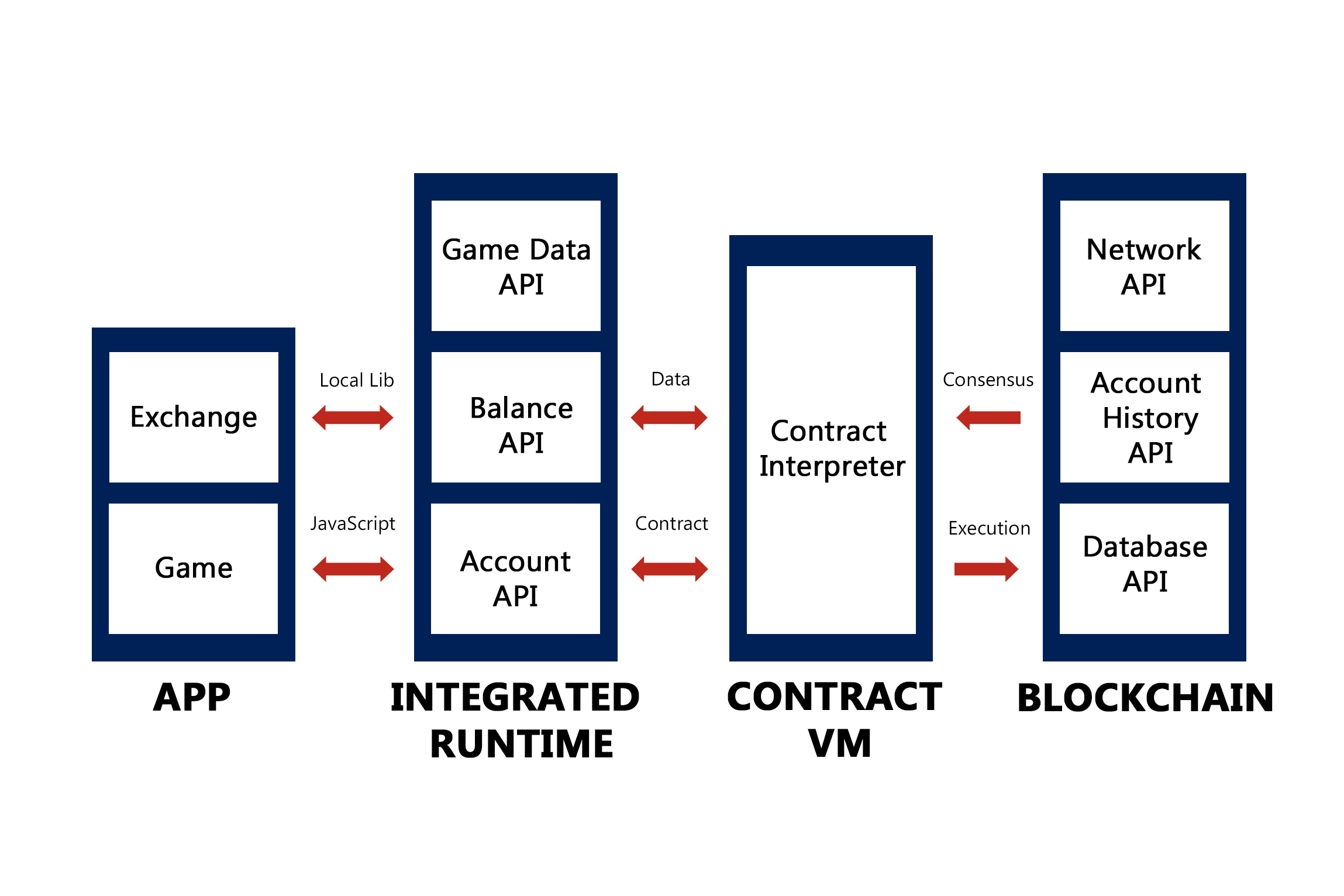 Once the platform had solidified its hold in the blockchain-gaming realm, Cocos-BCX introduced BCX-NHAS-1808 in August 2018, which it describes as a non-homogeneous digital assets standard. This standard is variable based on the development within the gaming industry and improves based on the current NFT record. The NHAS 1808 also furthers high extendibility to the digital asset in the game and allows inter-games asset transfer. A mere two months after the launch, Cocos integrated additional services like leasing and collateralized mortgages on the digital assets standard.
Cocos has also penned collaborations with established public blockchains like TRON, Neo, Ontology, Zilliqa among others. These partnerships will allow their NHAS-1808 standard to be widely distributed and the digital assets network is cemented far beyond a standalone network.
Blockchain networks like Tron and Loom Network are potential rivals to Cocos BCX, however, the latter holds its own against them. Owing to its improved DPoS system, and shorter block generation period, the computational process is eased. Cocos BCX also provides internal source randomness input which the others fail to provide. Furthermore, ongoing developments have increased the pool size to support models of collateralization, leasing, and pawning of assets which is unsupported in the other two networks.
Three primary adversaries to the Cocos system, in terms of blockchain games, are Enjin, the Singapore-based blockchain gaming. Furthermore, Enjin has also tied up with Samsung to integrate its gaming model on the latest Galaxy S10. BitGuild another top blockchain-powered gaming company also aims to build a gamer community that can be tied through the economic-mirroring model of the blockchain. BitGuild’s prowess is further boosted by its strategic cooperation with Tron to expand online gaming. The Moscow operated Playkey is also a top competitor to Cocos, operating on a cloud gaming portal with over 500,000 paying users.
With a successful 2018 wrapped up, Cocos-BCX plans on building a complete digital assets exchange for their users and developers to trade within the respective game and also integrate the exchange on the game. A full swath of essential tools will also be added in time, to build a complete ecosystem around the blockchain.
This exchange will allow users of different games to not only interact with each other but also exchange digital assets and tokens via the Cocos BCX digital exchange operating on the blockchain. In-game items like skins, weapons, vehicles could make their way onto different games and the DApps built on the blockchain could exchange items between each other via their exchange.
Sooner or later, the gaming world will expand its ecosystem from a single-game, single-mission approach to one that provides a range of opportunities, both for gamers and developers, thanks to the Cocos BCX blockchain games.
Check out this video for the review of Cocos BCX

Risk Warning from AOFEX: Are certain altcoin worth investing?