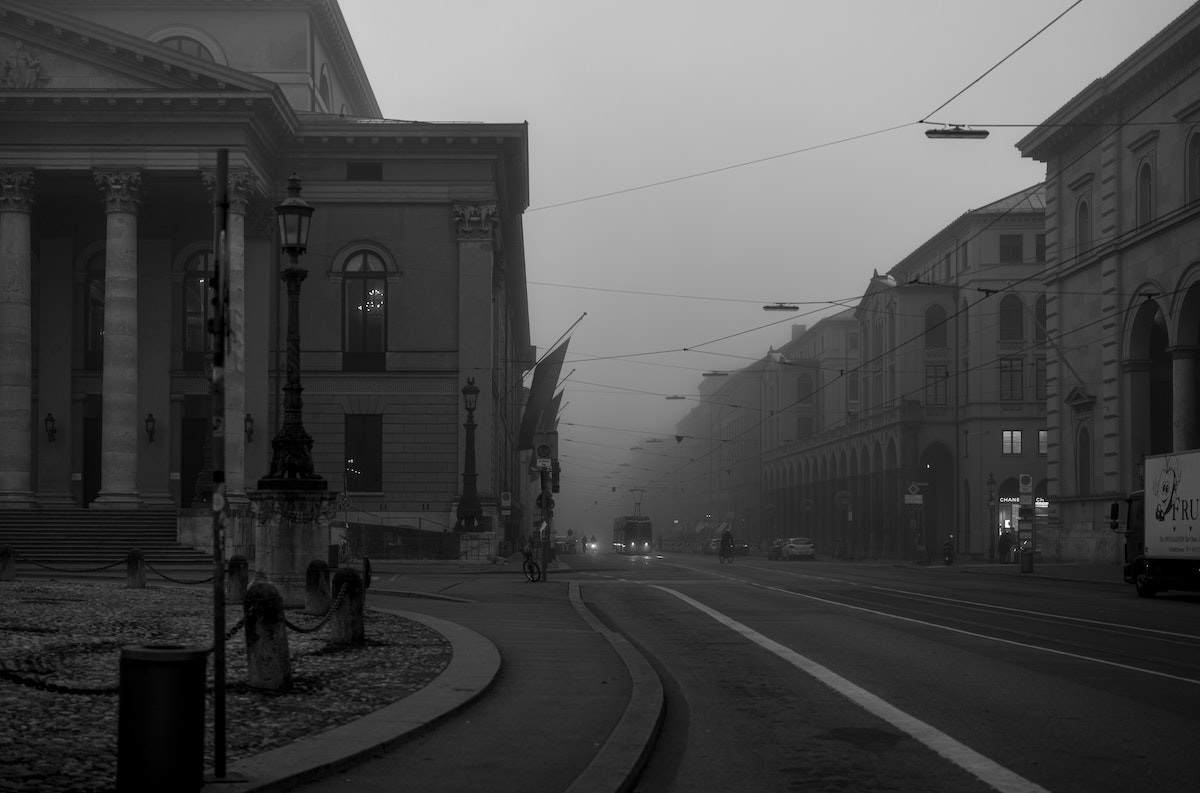 To make things worse, derivative markets suggested fear of further downside at least for the next three to six months.

This week, we analyse the diminishing return profile of both $BTC + $ETH, and what market structure, and on-chain usage tells us about the road ahead.https://t.co/5KK6xBLVUg

Considering the largest cryptocurrency, BTC traded within an approximately 4yr bull/bear cycle, often associated with the halving events. Looking at the long-term compression of returns, CAGR declined from 200%+ in 2015, to less than 50% as of this writing. 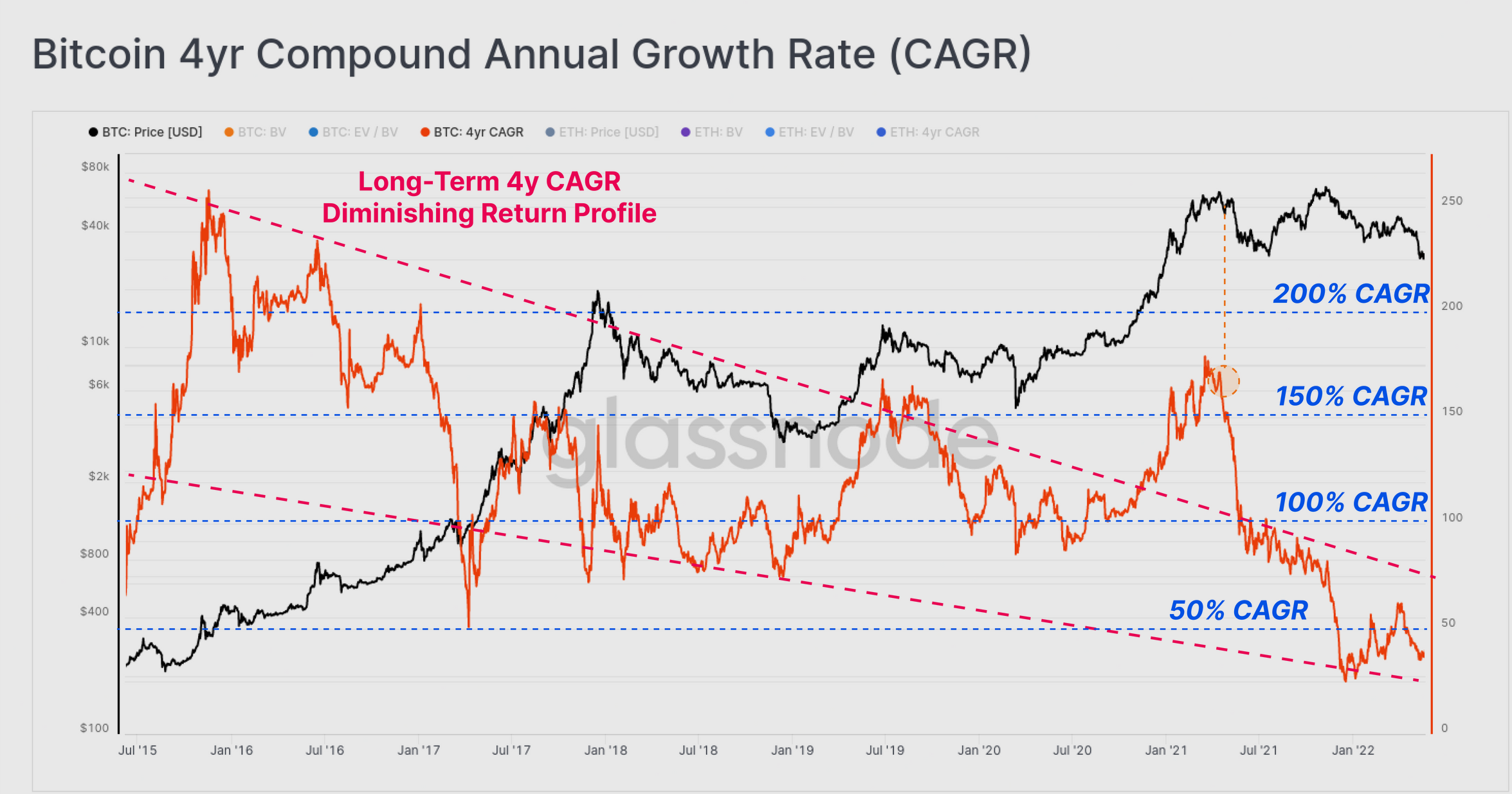 “In particular, we can see the marked decline in 4y-CAGR following the May 2021 sell-off, which we have argued was likely the genesis point of the prevailing bear market trend.”

In addition, Bitcoin gave a negative 30% return over the short term meaning it corrected by 1% on average on a daily basis. This negative return is quite similar to the previous bear market cycles for Bitcoin. 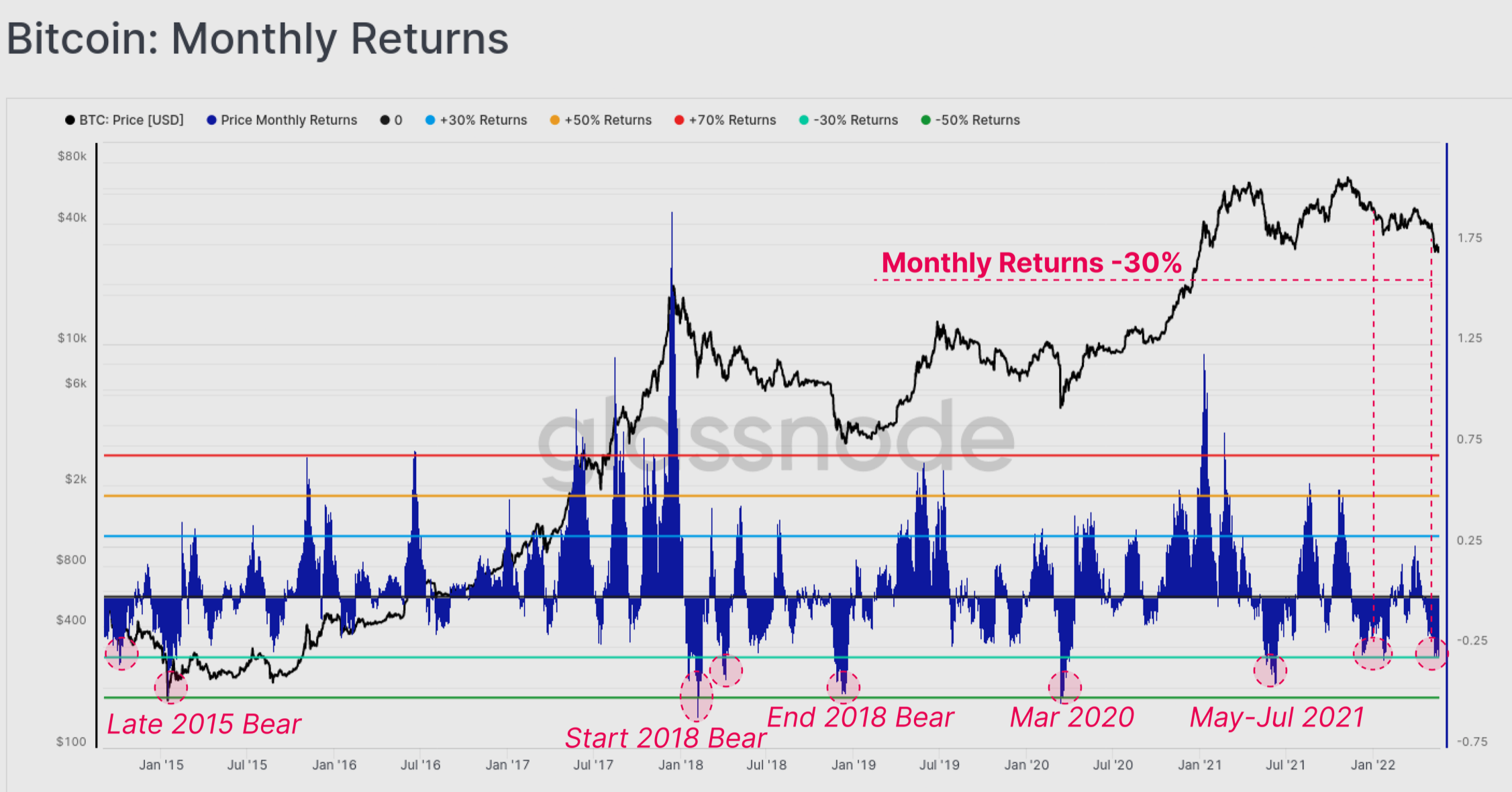 Moving on to ETH, the altcoin recorded relatively poorer performance compared to BTC. The monthly return profile showed Ethereum recorded a grieving picture of -34.9%. In the longer run, Ethereum also seems to be experiencing diminishing returns over time.

Furthermore, over the last 12-months, the 4yr CAGR for both assets declined from 100%/yr to just 36%/yr for BTC. Also,  28%/yr for ETH, highlighting the severity of this bear. 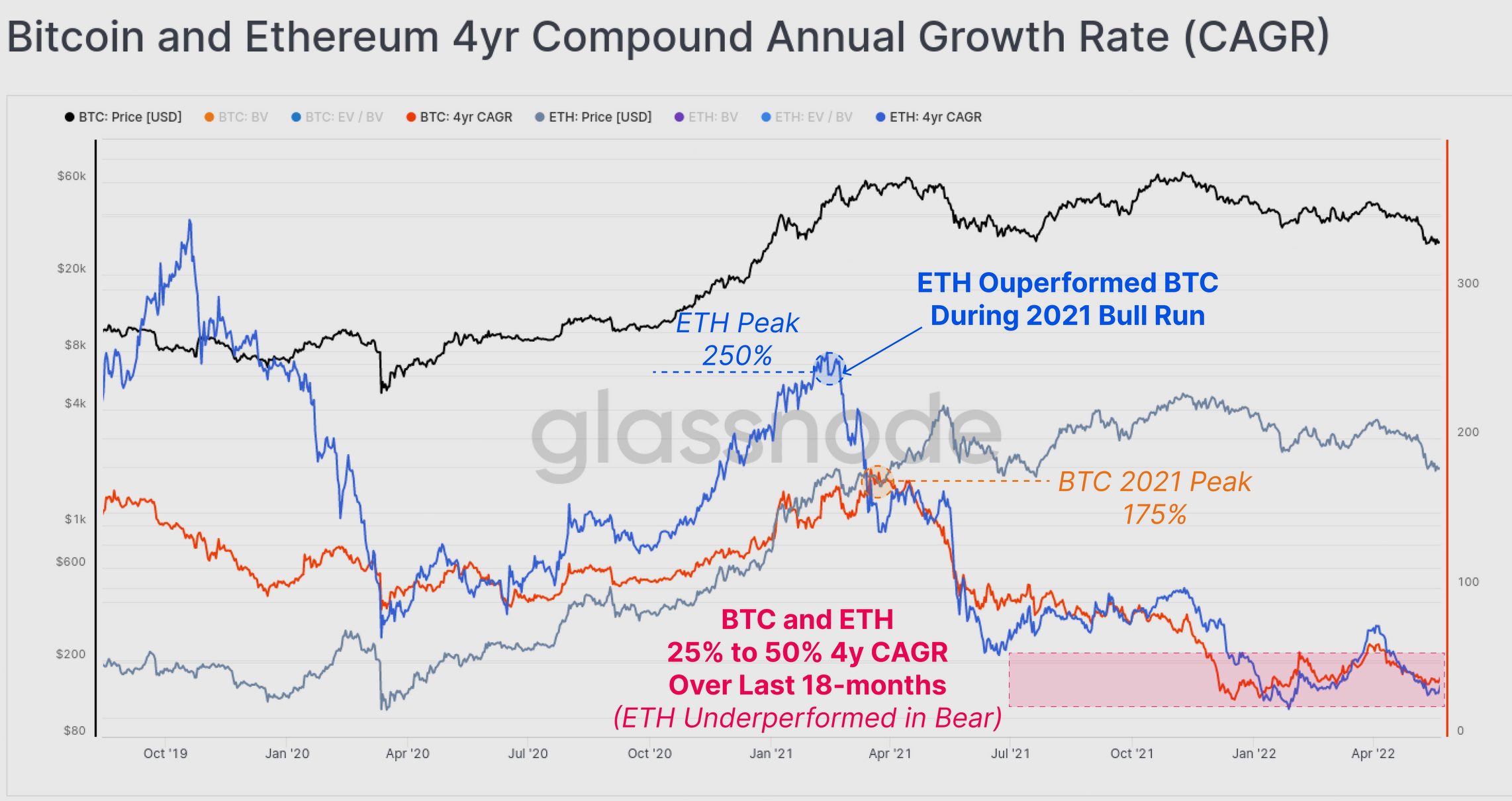 “ETH has generally outperformed BTC during bullish trends, however these divergences do appear to be getting weaker over time (lower upwards divergences). In more bearish trends, it can be seen that the ETH CAGR often tends to underperform BTC.”

To make things worse, the derivative market cautioned a further decline within the market. Options markets continue to price in near-term uncertainty, and downside risk, especially over the next three to six months. In fact, implied volatility experienced a significant increase last week during the market sell-off. 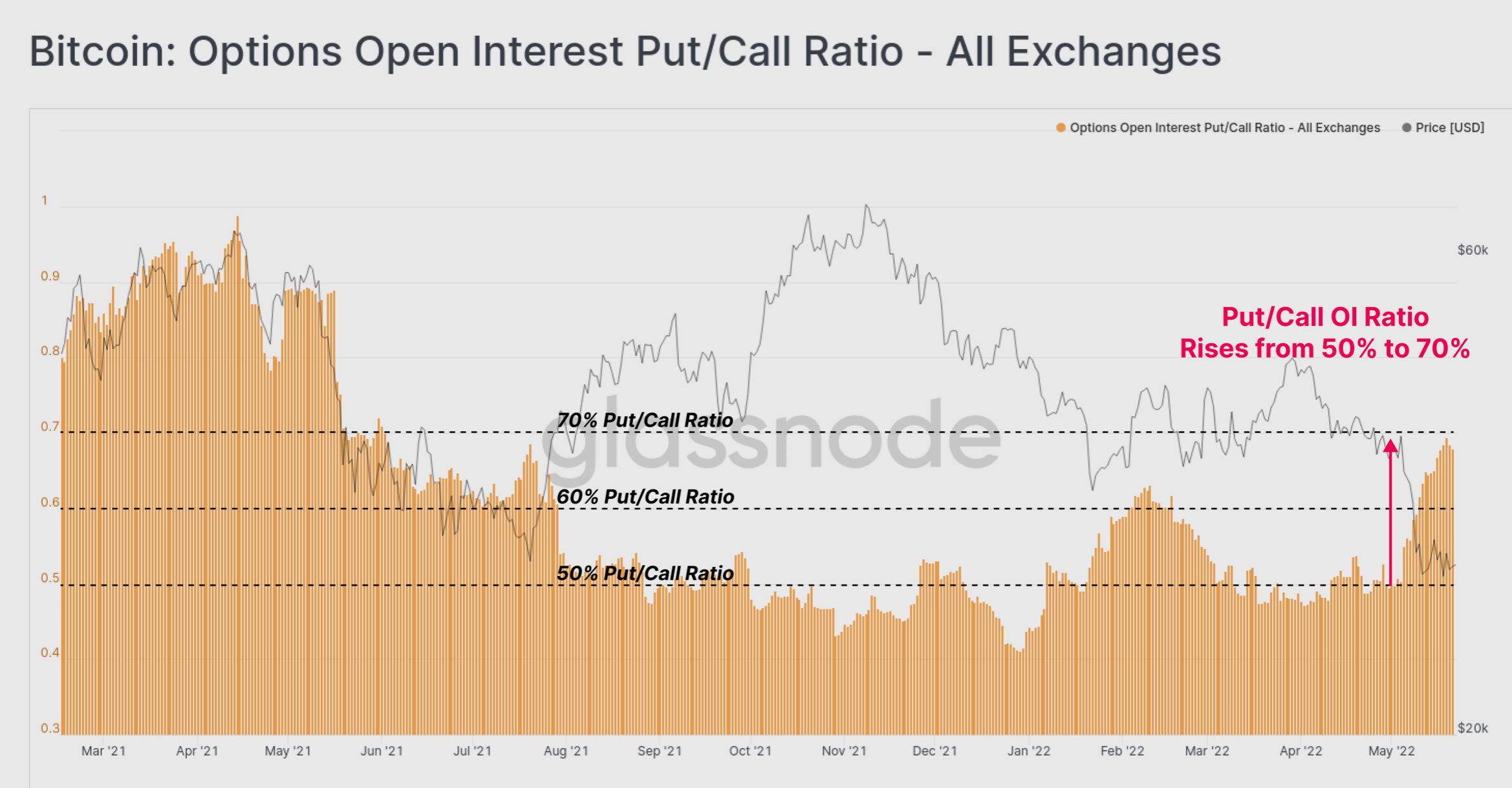 Notably, with such a heavy bear market in play and unimpressive price performance, it is no surprise that the market had a notable preference for Put options. The Put/Call Ratio for open interest increased from 50% to 70% over the last two weeks, as the market seeks to hedge further downside risk.

Related Topics:BitcoinEthereumOptions Market
Up Next