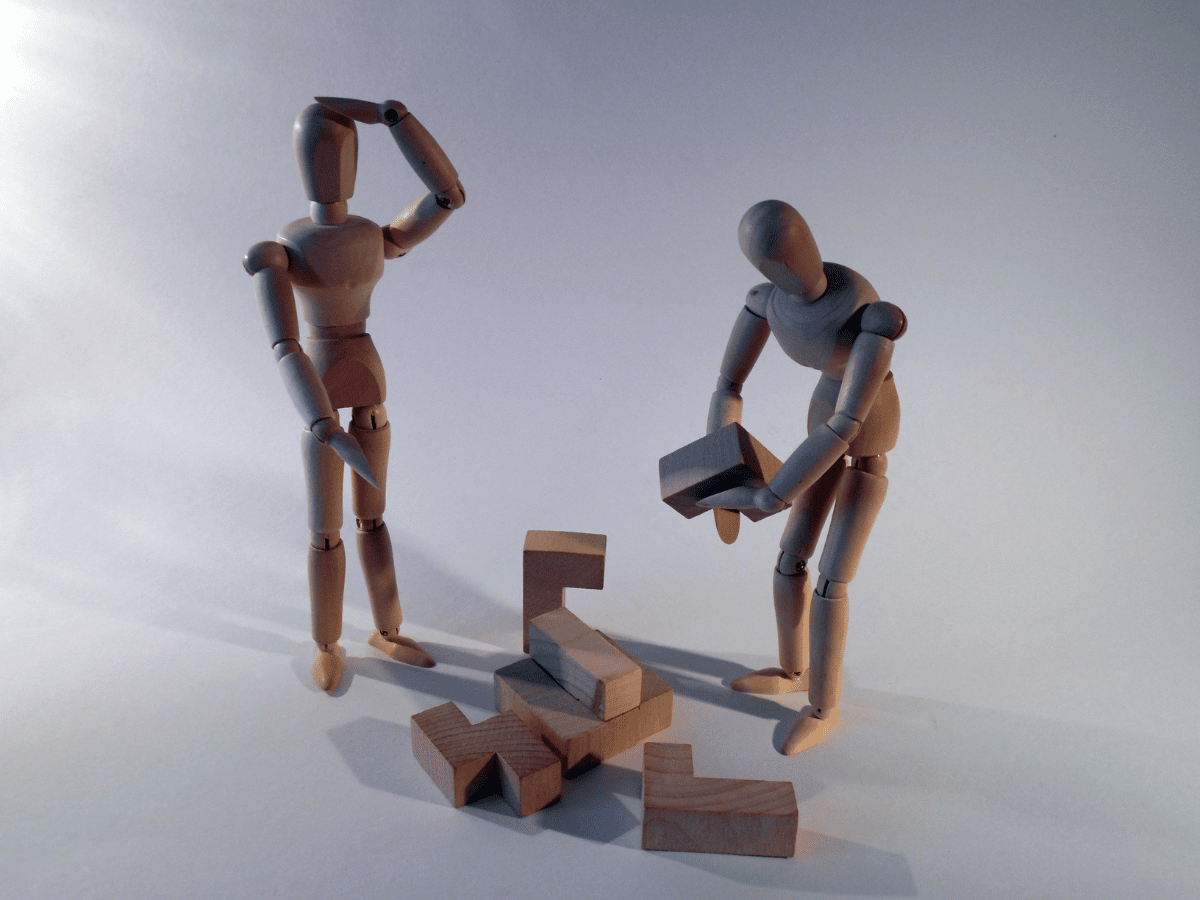 Cardano [ADA] investors’ positive expectations of the upcoming Vasil Upgrade could be shortened. No, it’s not because the upgrade might experience some hiccups, but a focus on the price performance.

Renowned trader and analyst, Peter Brand stated via Twitter that ADA was still headed for doom despite the underperformance in recent times. According to Brandt, ADA’s pattern lately was reflecting more bearish signals.

In his tweet, the analyst pointed out the descending triangle, which calls for ADA hitting another decline.

This is a fractal chart construction known as a descending triangle. If it continues in the fractal, $ADA should have one more significant decline. "Should," not "must" pic.twitter.com/b3ZL7NTdYj

Are the projections likely?

While Brandt noted that nothing was certain, the patterns on the chart seemed to suggest acceptance. According to the four-hour chart, ADA had formed ascending triangles on two occasions since September began. The first happened between 3 and 4 September, while the other was between 8 and 10 September. 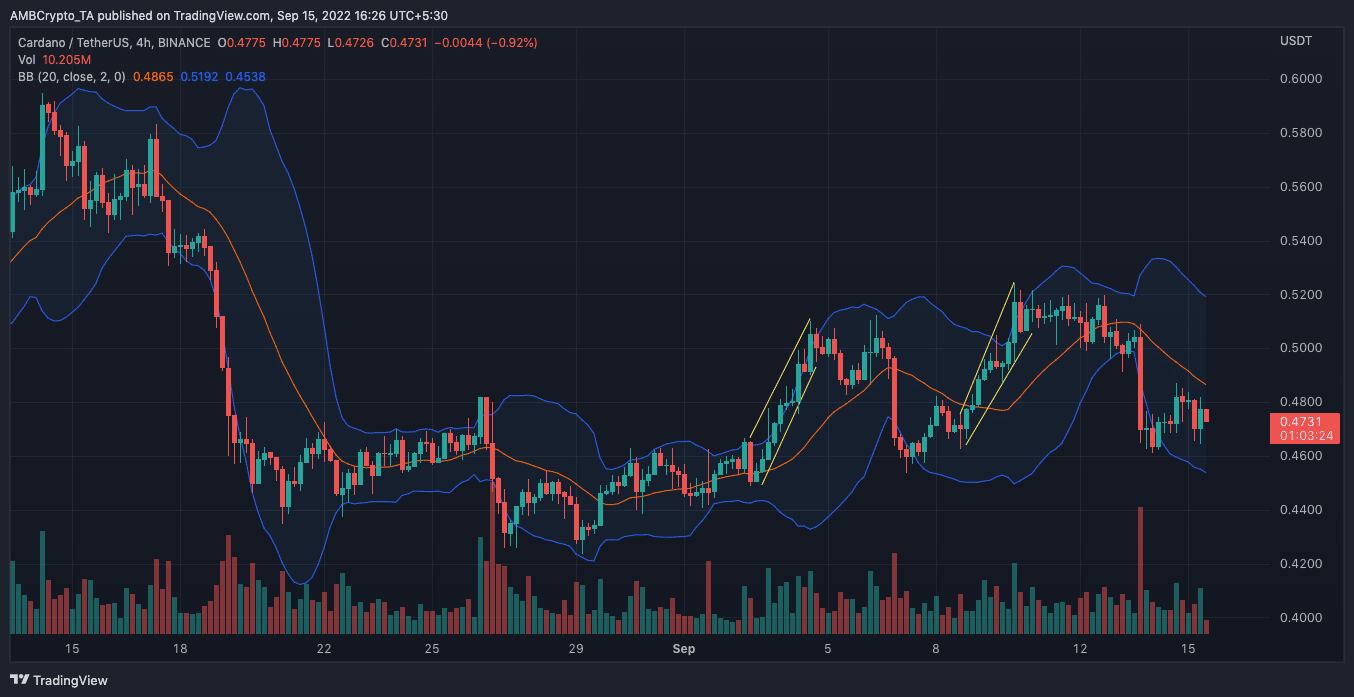 However, on both occasions, ADA experienced some ups and downs before finally falling to long red candles. With its current trend, ADA looked likely to succumb to a capitulation, especially as the Bollinger Bands (BB) revealed the volatility stance. According to the BB, ADA’s volatility was currently in an extreme zone.

However, there might be possible truths in Brandt’s prediction. This is due to the indications from the Exponential Moving Average (EMA). At the time of writing, the 20 EMA (blue) was right below the 50 EMA (orange), indicating that sellers have forced buyers out of market control. This position was also proved by the Directional Movement Index (DMI).

The DMI agreed with the status of the EMA as the sellers’ strength (red) at 23.65 was solidly above the buyers’ (green) at 12.90. Additionally, the Average Directional Index (ADX) showed that the seller strength was a rock-hard one that buyers might find impossible to revoke in the short term. 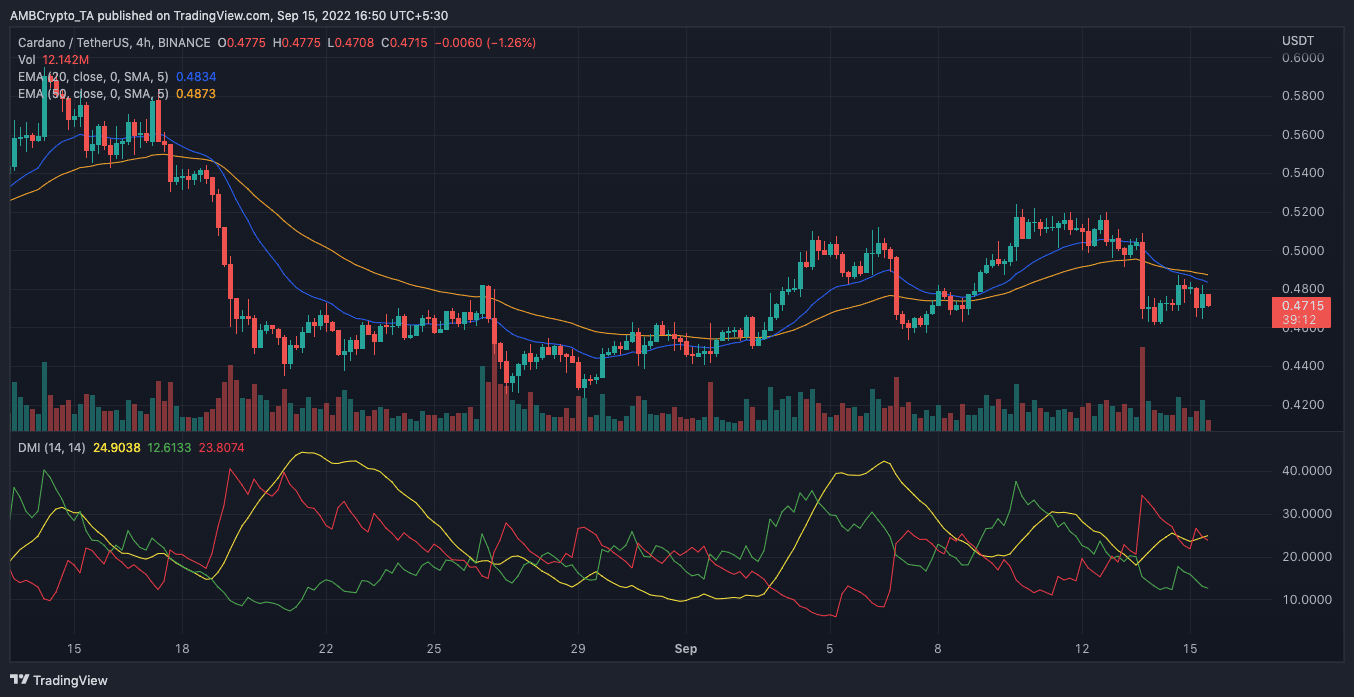 With this current momentum, ADA might most likely continue in a bearish direction more than a bullish reversal.

Since the Vasil upgrade stood one week away, it seemed necessary to check out ADA’s on-chain metrics. According to Santiment, the thirty-day Market Value to Realized Value (MVRV) ratio was at -0.0135%. This value meant that ADA’s realized value was worth more that is market cap.

Celsius: Why a 30% surge doesn’t mean anything concrete for CEL investors