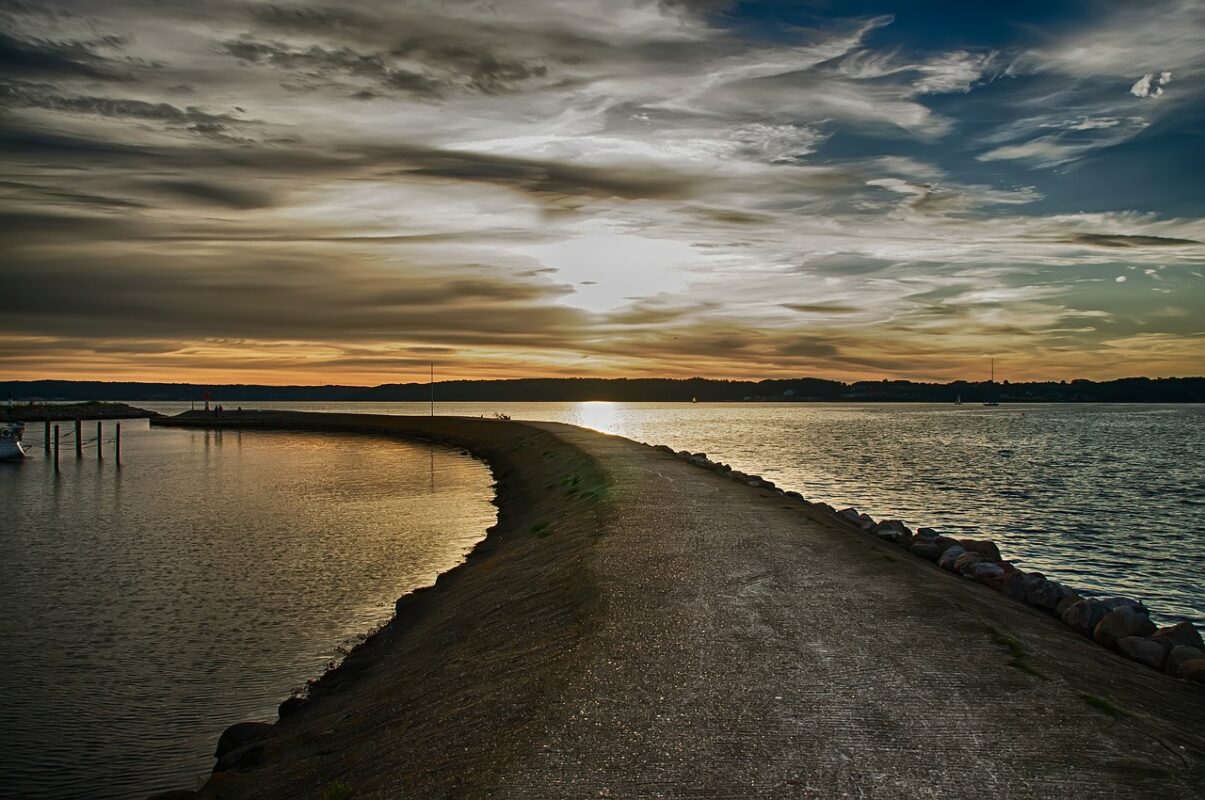 Cardano, one of the most popular altcoins trading in the market (judging by its $21.9 billion market cap), has been in a downtrend since September 2021. The late-March rally did not break this downtrend, and at press time, the higher timeframe structure still looked bearish.

However, a rally like the March one could materialize in the next couple of weeks, as the price broke past the $0.6 resistance level with intention. Can the bulls defend the $0.57-$0.59 demand region? 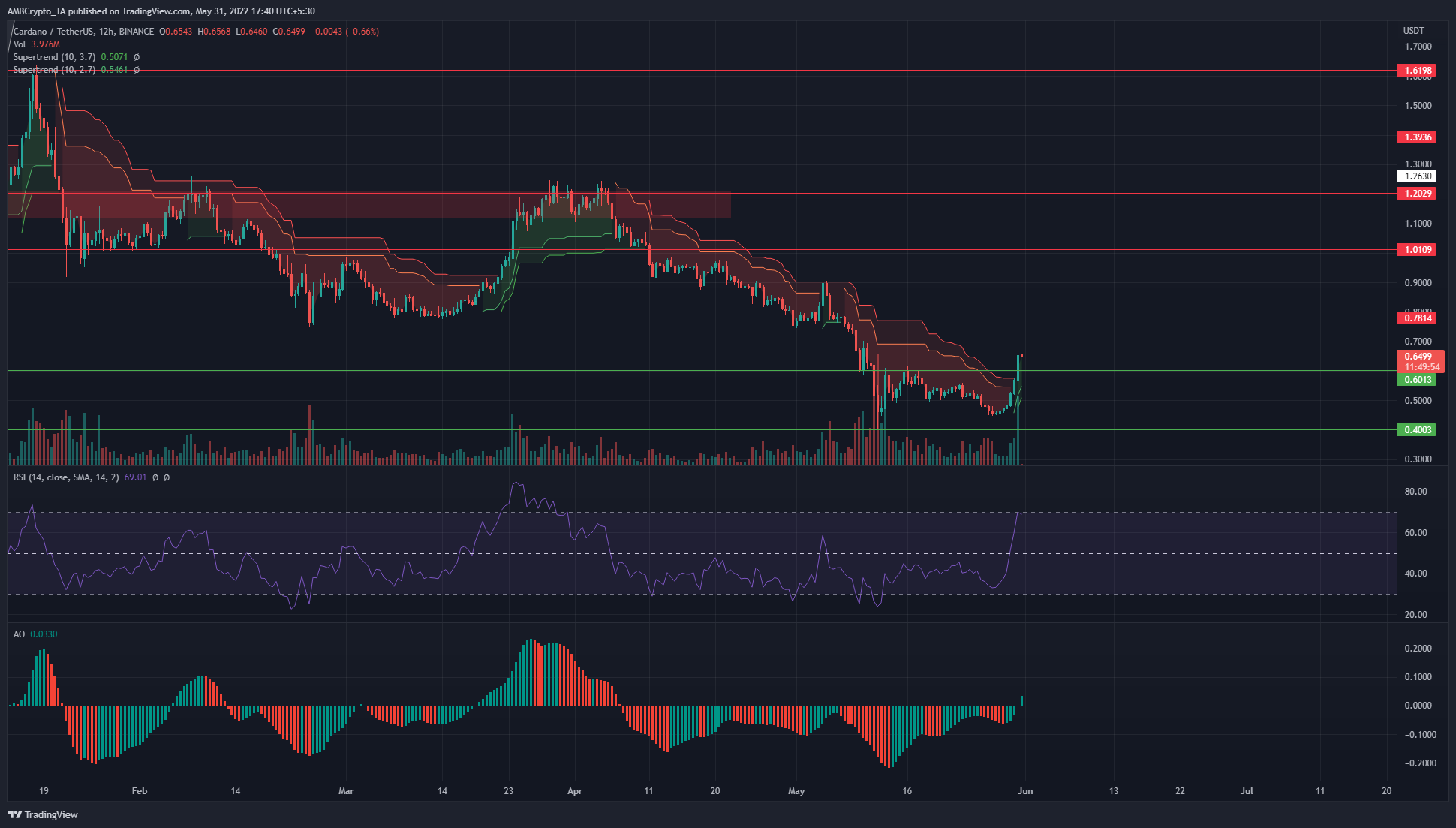 The H12 chart showed that ADA was still on a downtrend. However, the bearish market structure was broken when the price rose past the $0.6 level, which had been tested as resistance two weeks ago, and thereafter the price continued to descend to $0.45.

The surge of the past couple of days occurred on high trading volume and moreover, has taken out the two Supertrend lines that have held firm since early April. They had shown a sell signal for most of the past two months, but the impulse move past $0.6 changed them to a bullish bias.

The RSI stood at 69, and divergence was not seen. Strong bullish momentum was the inference, as the AO also climbed past the zero line to show that momentum had indeed shifted in favor of the bulls. 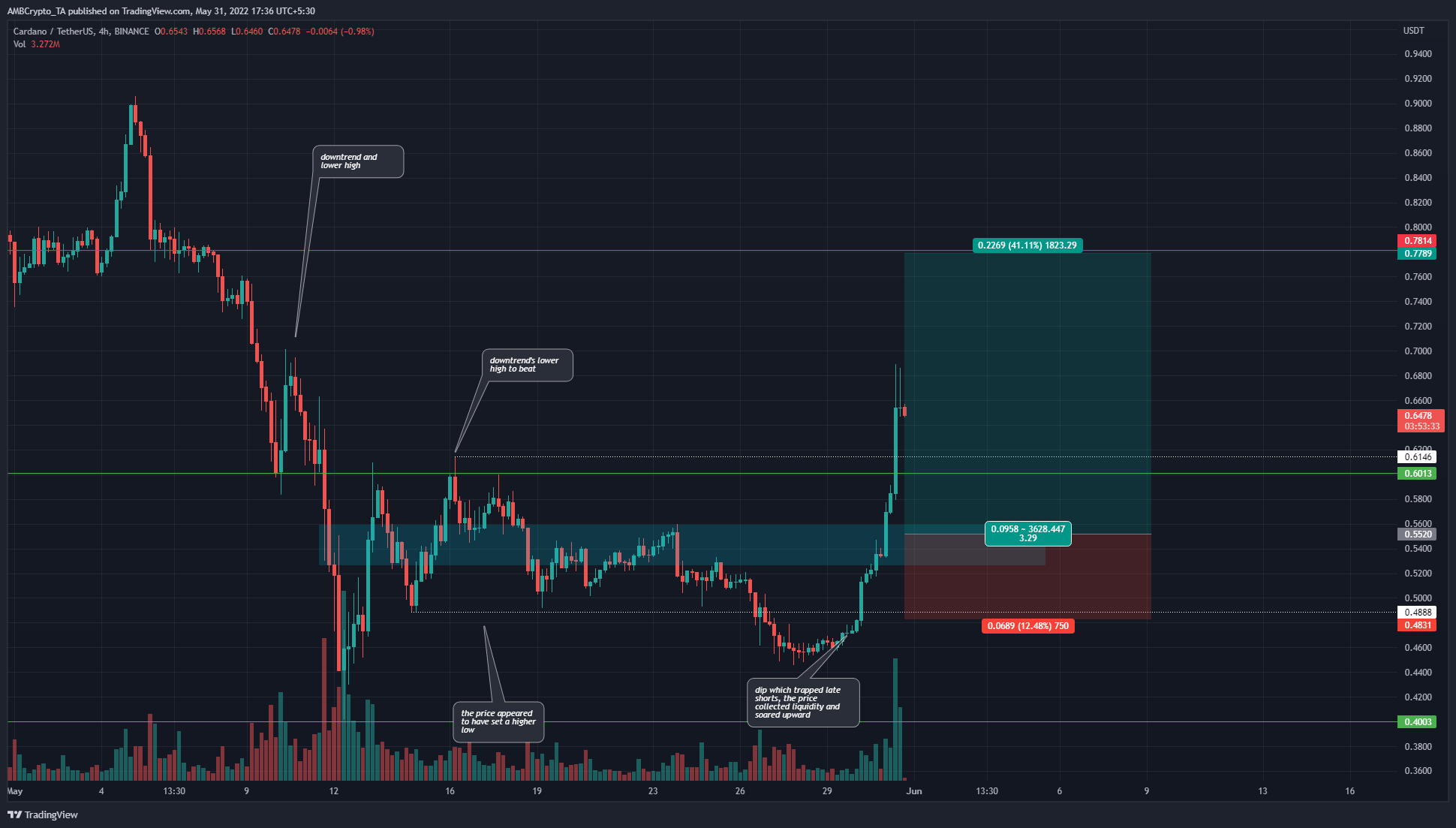 On the H4 chart, the $0.61 and $0.488 (dotted white) lines are some important lines over the past two weeks that would give an idea of the next move for ADA. For a brief while, when BTC plunged to $28.3k, ADA dropped to $0.445, but this short-term bear trap saw the price reverse direction swiftly.

The $0.61 level was beaten to shift the market structure to bullish, and the $0.5-$0.55 zone was cleanly broken past. The $0.6 level has been important in the past three weeks, and it remains to be seen if the bulls can defend this level.

The $0.6-$0.57 area can be used to enter a tiny long position, with the $0.55 mark being another place to add to longs. Since the market conditions and the overall trend were quite uncertain, a smaller position than usual can be taken, with risk limited to less than 1%. Stop-loss can be set just below the $0.488 mark. 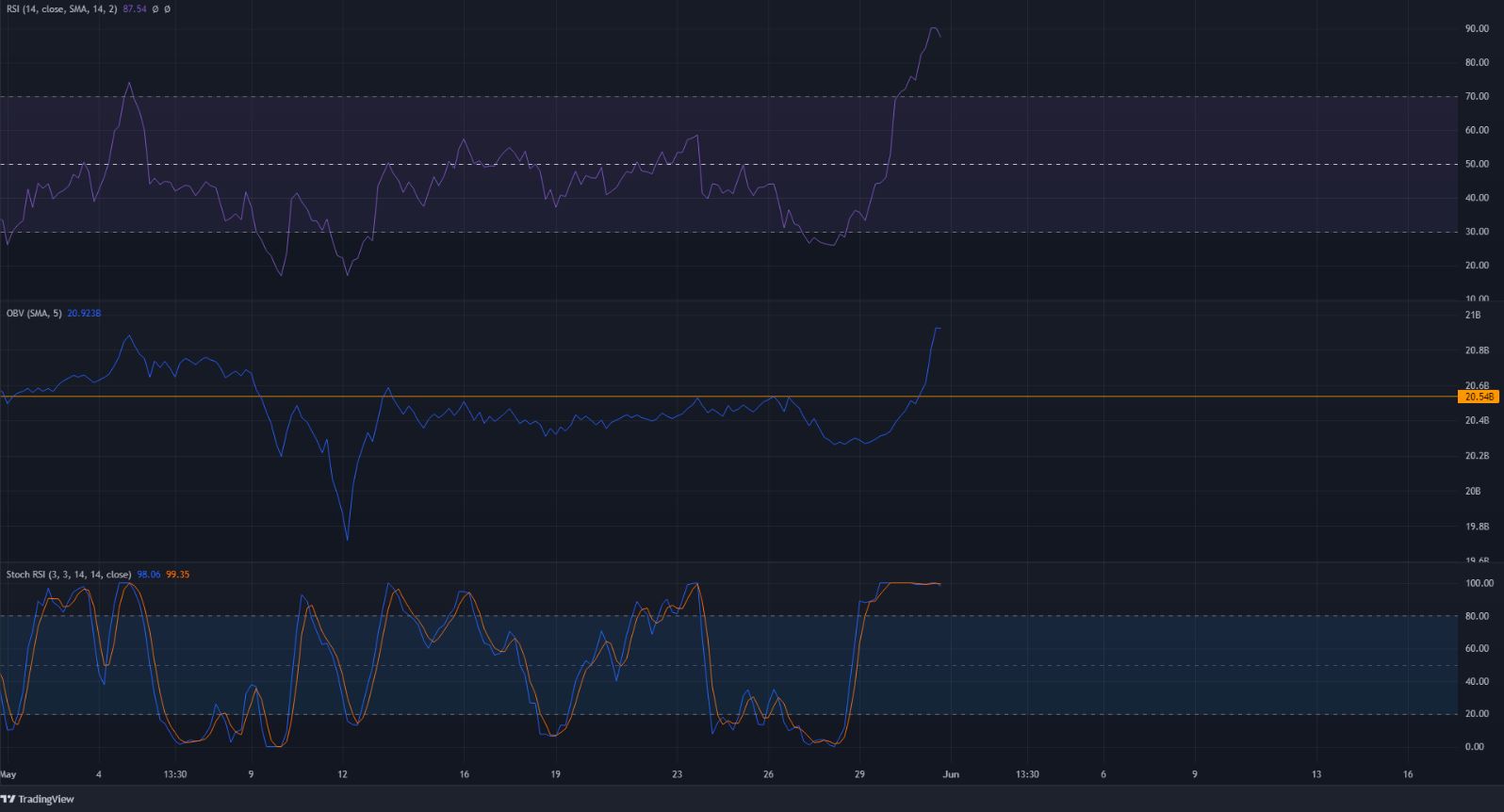 The H4 RSI and Stochastic RSI were stratospheric, and a pullback to $0.6 could occur in the hours to come. A signal to enter an ADA long position can a bullish crossover on the Stochastic RSI combined with the RSI itself being above neutral 50 on session close, provided the price continues to trade above the $0.55 mark.

The OBV also saw a sharp spike upward, past resistance from 12 May, which adds confluence to a bullish breakout.

Long positions entered around the $0.6 and $0.55 levels would need to be carefully managed with respect to position size. The price action and indicators showed a move upward to $0.7 and $0.77 can be anticipated. The conditions need to line up and Bitcoin needs to break past $32k to add conviction to ADA bulls making a move higher.

Given the fact that ADA and BTC faced some resistance just a few percentage points north, capital risked on an ADA long can be limited to under 1%.

GMT ‘runners’ look dismayed; will STEPN lose the race to the bottom