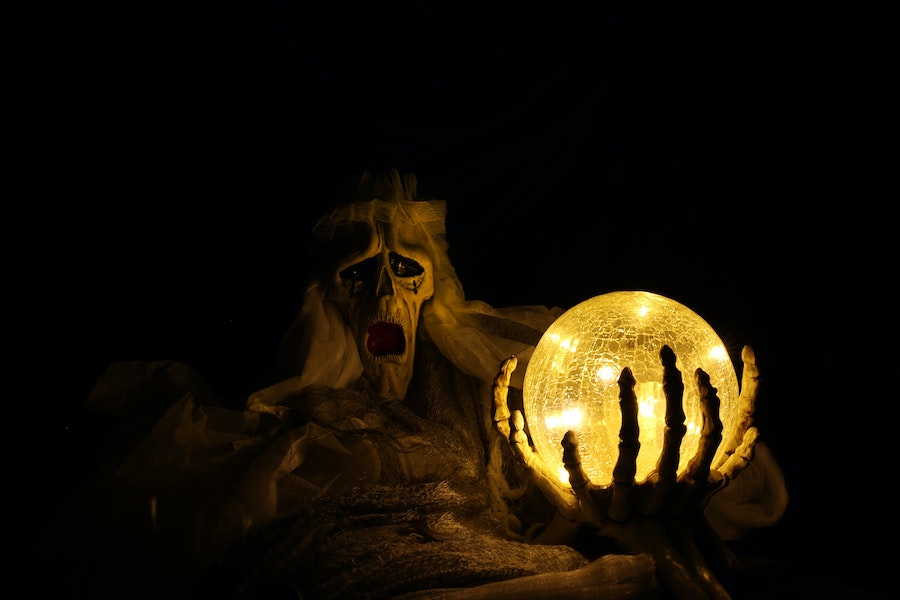 Cardano, its recent developments, and its associated bullish momentum have been the talk of the town lately, with different crypto-proponents underlining their vote of confidence for the project. In fact, when ADA touched an ATH a while back, briefly, it was also one of the market’s top-4 cryptos. Later, however, market corrections contributed to Cardano dropping back to number five again.

Nevertheless, some critics have focused on Cardano’s failure to achieve its set goals, objectives IOHK’s Charles Hoskinson had himself set a year back. In fact, there are many who have labeled Cardano as a “Ghost of Blockchains.” As covered previously, a few Cardano critics have even slammed it for the lack of assets or dApps operating on the blockchain.

Here’s one of them,

Do people realize that Cardano barely does 20k transactions per day?

Yet $ADA has a valuation of $63b despite zero traction a full 5 years after its ICO.

Using the same narrative, is it true? Is Cardano nothing but a ghost chain?

Well, take into consideration the aforementioned aspect. As of 6 July, Cardano was the top blockchain measured in terms of average development activity, followed by other altcoins in the market like Polkadot, Solana, and Filecoin. 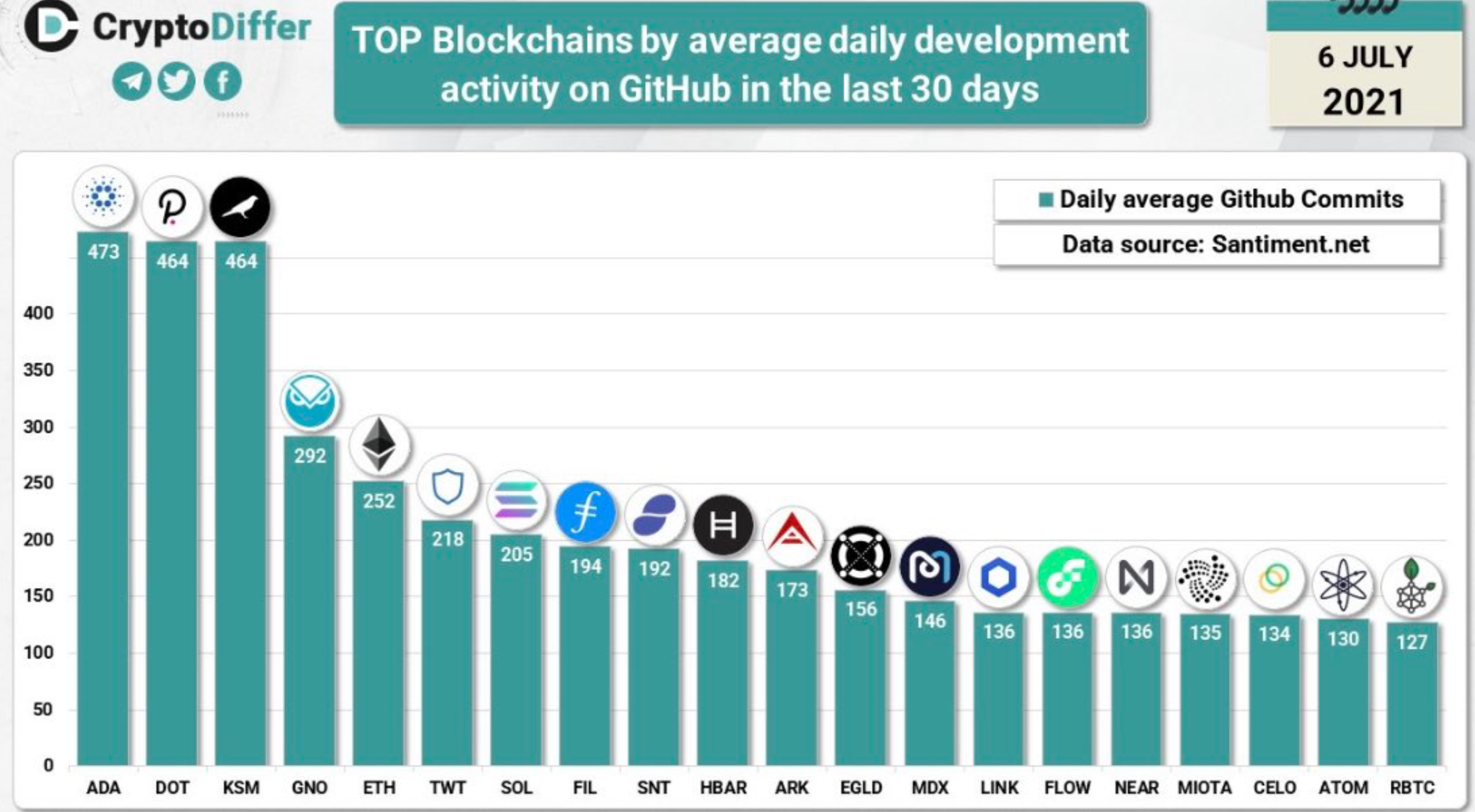 The aforementioned finding underlines the bullish sentiment in the community, with one of the proponents adding,

“The digital ecosystem is being built before our eyes. It’s early. Enjoy the process. Cheers to all the devs putting in work.”

Such FUD isn’t new, however. IOHK CEO Charles Hoskinson has in the past quashed all the “Ghost Chain FUD” by simply sharing the map of the Cardano ecosystem. As seen below, this incorporates enterprises, businesses to developer tools, wallets, infrastructure providers, and many more. Addressing those crypto-skeptics, he had said,

“Hey Ghost Chain carnival barkers, I ran out of space for my picture. I guess I need a bigger one.” 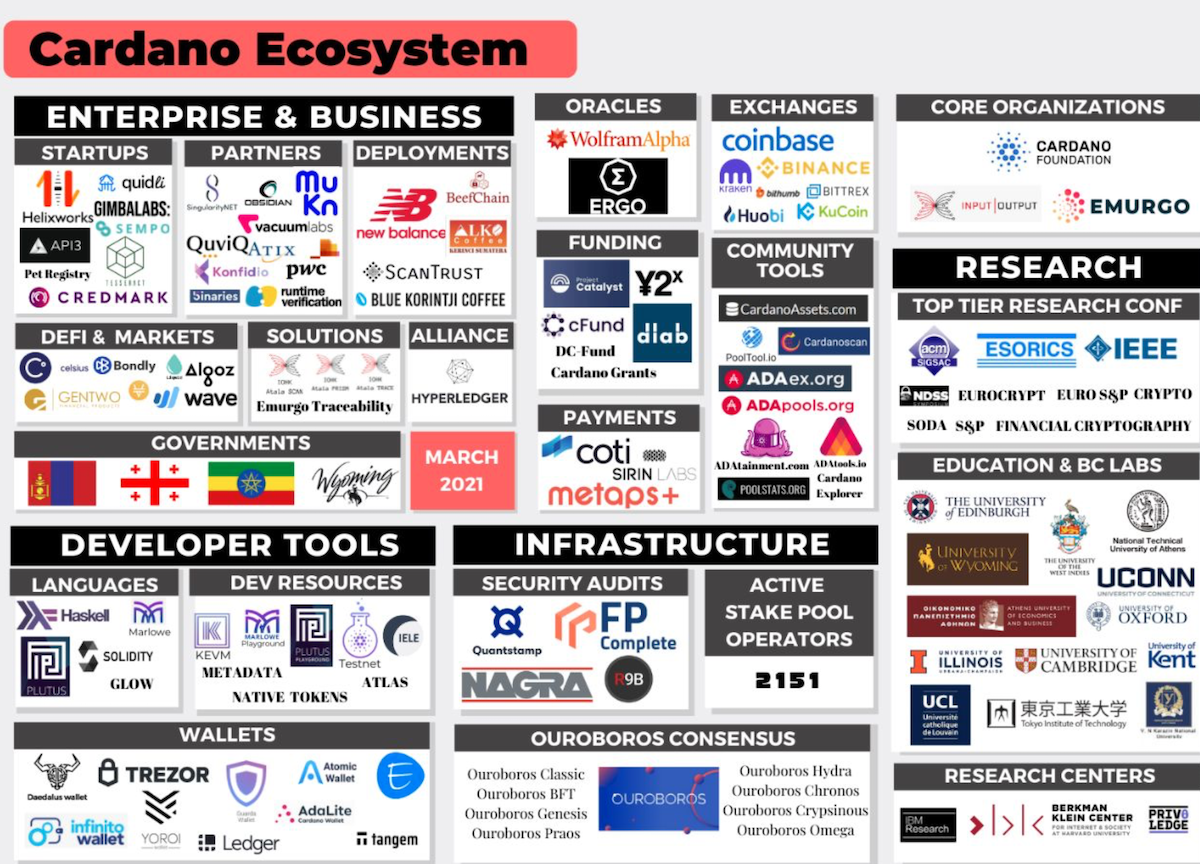 Since then, others have been quick to update the aforementioned map of the Cardano ecosystem in their attempt to counter the “FUD of a ghost chain.”

Cardano, with its Alonzo developments, has been trending; there’s no denying that. Moreover, Grayscale added Cardano to its digital large-cap fund that made it the third-largest component of the GDLC basket after Bitcoin and Ethereum. This institutional move towards adoption could set a benchmark for other institutions to adhere and adopt.

In addition to this, PoolTool’s data showed that around $31 billion or roughly 72% of ADA had been staked before the launch of smart contracts functionality.

Moreover, retail interest in the flagship coin has boomed as well. Not so long ago, trading platform eToro revealed that ADA, not Bitcoin, was the most held crypto in Q2 of 2021. At the time, Weiss Crypto had observed,

#Cardano overtook #Bitcoin as the most held #crypto on eToro in Q2 of 2021. Being a successful decentralized network isn't just about strong technology. It's also about building a community. Datapoints like these show $ADA is on its way to building a strong community around it.

At the time of writing, ADA, the fifth-largest cryptocurrency in the market, was trading at the $1.34 price level following a minor correction of around 1% in 24 hours.

This is the safest bet for Ethereum traders right now