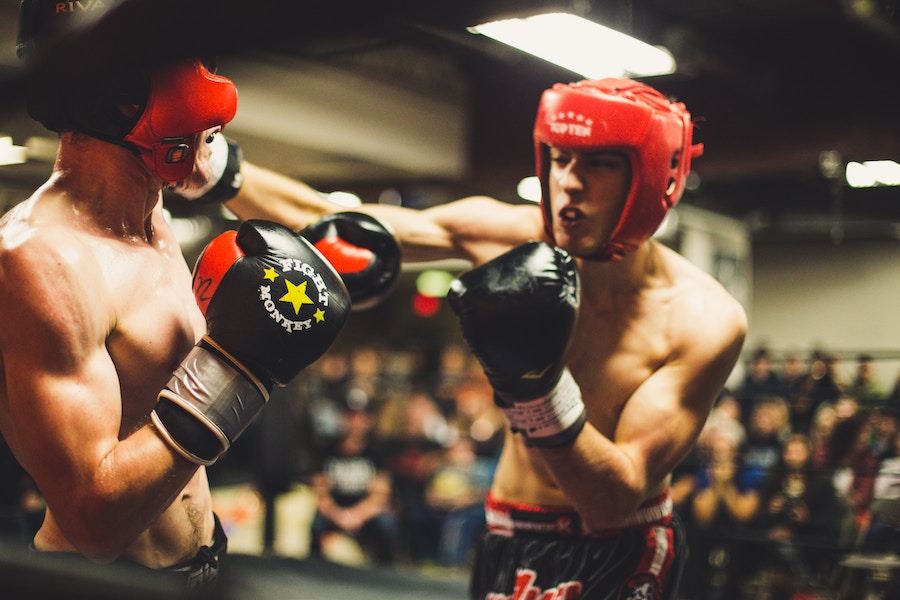 The entire cryptocurrency market witnessed the wrath of the bear market, with a majority of coins bleeding by over double digits towards the end of 2018. Most coins have also lost over 90% of their value since hitting their all-time high, showing the severity of the crypto-winter. The bear did not spare even top cryptocurrencies such as Bitcoin [BTC], Ethereum [ETH], XRP and Litecoin [LTC].

This year seems much better than the last as some coins have ascended over the past two months. More so, the major players of the market kept their hold above their crucial support levels. Nevertheless, a recent report by Diar stated that volatility of the largest cryptocurrency by market cap, Bitcoin [BTC], dropped by 82% compared to the beginning of 2018.

The report also gave an insight into Bitcoin’s traded volume. It stated that the volume witnessed a massive drop of 55% in the past two months, in comparison to the volume of the first two months of 2018 when all the cryptocurrencies were at their peak. However, the coin’s volume has not witnessed a drop compared to the 2017 data, instead seeing a significant rise of 45%. 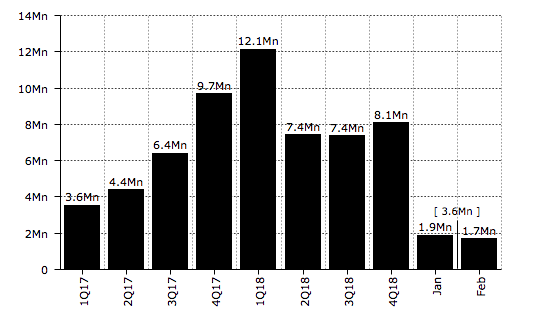 Bitcoin Trading Volume over the past several months | Source: Diar

“With prices down and volatility taking a back seat in recent months, Bitcoin trading volumes across exchanges have hit new lows. Still, traded volume in terms of Bitcoins remains higher than that seen in 2017. But as market share across major exchanges continues to drop, Binance is one seeing growth.”

Coinbase, one of the largest cryptocurrency exchange in the United States, took a massive hit with all the recent controversy surrounding the exchange, especially the #DeleteCoinbase movement. According to the report, the exchange’s Bitcoin trading volume slumped below $1 billion last month, for the first time in almost two months.

“Adding alcohol to the wound, Coinbase’s market share against major exchanges has also dropped from an average of 24% in 2017 to half that in 2018.” 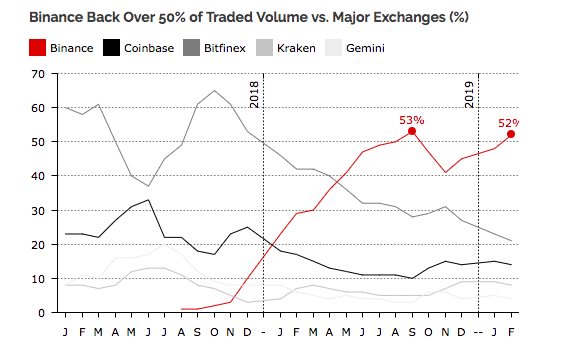 Binance, the largest cryptocurrency exchange platform in terms of trading volume, scored well compared to other exchanges. The report stated,

“Binance though has been able to capture valuable share against major exchanges now cornering over 50% of the market. This marks the third straight month in a row that Binance has seen its market share grow as Coinbase, Kraken and Gemini plateau.”

Changpeng Zhao, the CEO and co-founder of Binance said,

“we are not anywhere close to 50%. Looks like the research took a smaller sample exchanges than we normally would. It excluded a few “questionable” exchanges, and a lot of the smaller exchanges. But the relative numbers are interesting regardless.”

Excel and Be an MOS: Microsoft Office Excel 2016 Expert