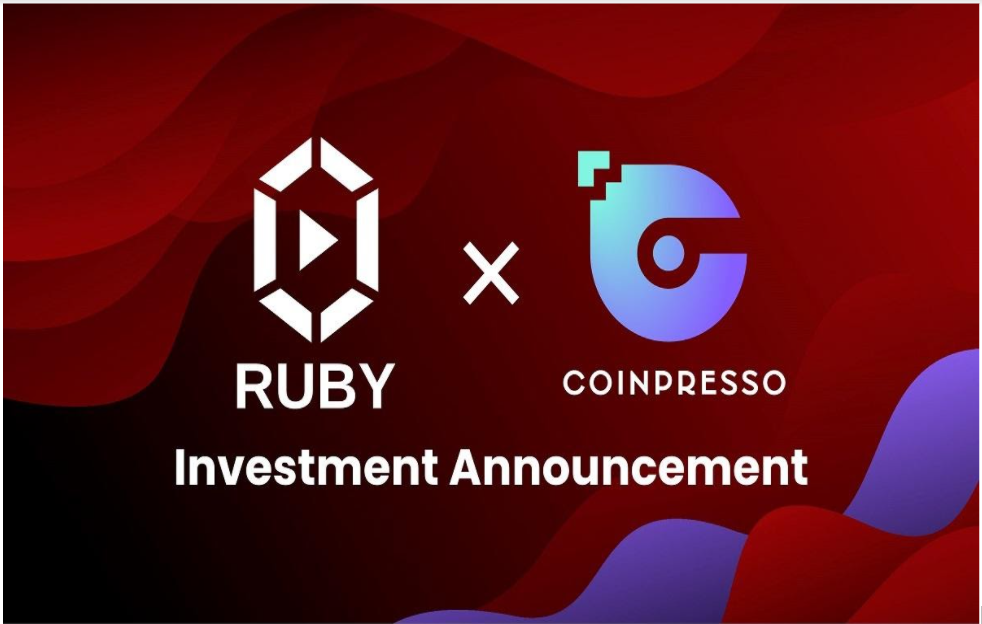 Blockchain gaming platform – the Ruby Play Network – has today gained another institutional backer in the form of leading SEO & crypto marketing firm, Coinpresso. The crypto marketers have reportedly invested a considerable $100,000 into Ruby Play Network as a strategic partner. The partnership comes into immediate effect, with the meticulously-planned tokenization of the $RUBY token being brought into operation, prior to its IEO at the end of the month.

This invested partnership with the crypto advertising agency offers another substantial showing of investment for the Ruby Play Network and $RUBY token, prior to the February 28th public IEO on Gate.io startup platform, executed through their own Gate Labs startup arm.  Ruby Play Network has demonstrated consistent, rigorous scrutiny over its business strategy and implementation. Constant promotions like the Ruby PlayList contests have formed spikes in press and media coverage and other scalable metrics for the blockchain-based rewards token, after having seen the efforts of a 4 month-long marketing campaign starting to take effect.

Coinpresso is one of a few institutional investors to join Ruby Play Network as early funders, prior to public launch. The Christchurch, NZ-based registered entity has also received backing from majors like the Binance Accelerator Fund. The Binance-aligned fund seeks out start-up DeFi projects in specific categories, displaying progressive innovation and the potential to disrupt the traditional business sectors with intersecting blockchain-powered advancements.

Another strategic institutional backer, Yellow.org, has also partnered with the Ruby Play Network as early investors. Coinpresso certainly has some company among a few Ruby Play Network strategic alliances, and that fares well for all parties, as the team gets prepared for the approaching public offering. Promotions and contests are underway, in addition to an AMA tour that has already stretched a month-long, all supporting the Gate.io startup platform IEO. As a special ongoing event, Ruby Play Network is currently hosting their own compliant iteration of a presale event, where interested investors get an opportunity to invest early into RPN via SAFT agreement, just like the institutional backers.

The Ruby PlayList community private round was co-created by Coinpresso and Ruby Play Network, as a strategy to bring greater awareness to the Ruby Play Network prior to their IEO, whilst giving the community the chance to enter private round 2. The combination of contests and a list with 1,000 limited spots for individuals interested in early access to purchase $RUBY has proven to be popular thus far, with over 1400 users a minute on the platform over the last few days. The Ruby PlayList has already been filled to almost 60% of the capacity in less than 2 weeks of campaign length.

Ruby PlayList is one of several promotions the two crypto innovators have developed and implemented together. Coinpresso and Ruby Play Network have worked closely together through the early weeks of developing ideas and thoughts around promotions, and conceptualizing an effective overall marketing strategy for the blockchain gaming and rewards company. The Ruby Play List remains open until February 21st or until no available spots remain – whichever occurs first.

What are the next steps for Ruby Play Network?

$RUBY tokenomics were another recent public release. Things are developing rapidly for RPN as the end of February IEO grows closer by the day. Beyond the launch later this month, Q1 is primarily focused on utility development for RPN, with plans to launch multiple play to earn crypto games and other ecosystem drivers onto the Ruby Play Network platform, including NFTs and Ruby PlayList innovations.

The AMA tour continues for the RPN team. The blockchain-based gaming platform is intentional about getting in front of as many serious investors as possible, in the weeks leading up to its IEO. Additional institutional backers, or other groups could possibly join the likes of Coinpresso and others as we move forward towards the end of month public release. The most up-to-date information and news can be best obtained in the Ruby Play Network telegram channel, where team members standby to answer questions and give insight related to Ruby Play Network, in the lead up to launch.

Shumo to launch its own token!