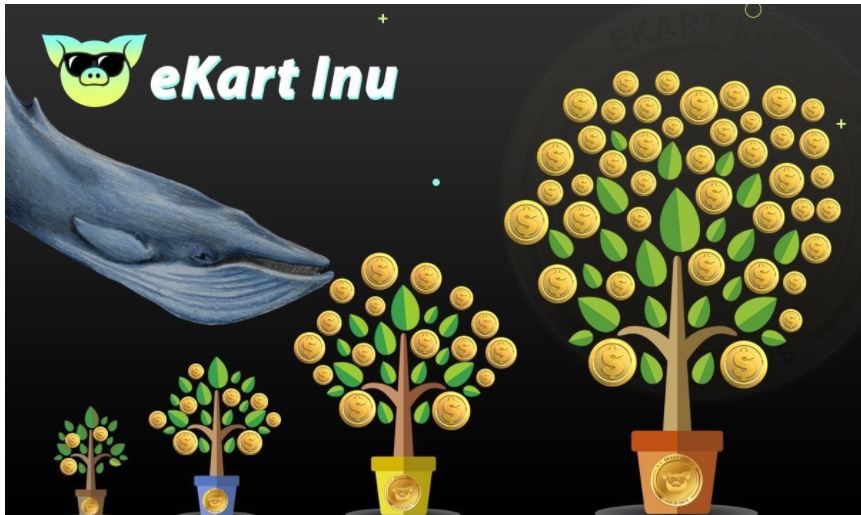 The Crypto world is observing a forever-increasing surge in the number of people getting attracted to the technology. They have seen a special surge since after the pandemic started. But not all the currencies that are being launched gain as many followers as EKart INU has gained in just a couple of weeks. Ekart INU has proved in every aspect, every promise they made. People are therefore happy and satisfied with the initiative. Within merely 1 week of launch, Ekart INU already had gained 100,000+ accounts under its hood. This led to the strategic move of associating with the Covid fund by Vitalik Buterin, the CEO of Ethereum.

Soon after this huge accomplishment, Ekart INU witnessed around 45 crypto whales who have recently bought massive amounts of EKARTINU tokens. Reports also claim that  45 whale accounts own EKARTINU tokens worth 100 million and all these transactions were made at nearly the same time.

Statistically, it has been such an enormous achievement for Ekart Inu that they might just have created history. After all, there has rarely been a token before which managed to garner such an immense amount of attraction towards itself during a token sale in just a span of 22 days. If Ekart Inu’s transaction history was to be analyzed, transactions worth 100K dollars to 30 million dollars can be observed.

Ekart INU today has reached a market capitalization of more than $250 million. Started presale phase 2 on August 14th this year, Ekart inu tokens have shot up in value. According to the market, the tokens have gone from $0.0000001 to their current value of $0.000001 — a 10X times rise. They have announced burning 80% of Ekart Inu holdings and distributing the rest.

Ekart INU is a sheer example of excellence that is supported and fuelled by the trust of people. It has now reached 300k+ Account holders and it has been just a few weeks of launch. Over 180k+ telegram family, and  10x high price in presale phase II. Ekart Inu has made the impossible possible.

Ekart INU is the first of its kind, with a vision to bring a revolution in the eCommerce industry. It is the first eCommerce platform to introduce a concept in which you can trade and buy and sell using cryptocurrency.

They are started with an initiative of using cryptocurrency over e-commerce portals. So basically you can buy, sell, and trade in Ekart INU. With the same initiative, they propose to start an eCommerce portal over the market and use Ekart Inu as the payment for online commerce.

As per genuine sources, it has been verified that 45 crypto whales have bought the EKARTINU tokens worth 100 million dollars, which is a great deal to Ekart Inu; the most talked-about e-commerce in the current scenario of cryptocurrencies.

There has rarely been a token before which managed to garner such an immense amount of attraction towards itself during a token sale in just a span of 22 days.

We can see the transaction here:

Where to Buy/Invest in Ekart Inu

Since you have a strong comprehension of Ekart Inu and its possibilities, it’s an ideal opportunity to talk about how to put resources into the token. Initially, you’ll need to make an account on the Ekart official site to work with your venture.

A significant number of the best-exchanging platforms will offer exchanging for Ekart Inu however it might require some investment to list in a large portion of the trades, as the token is right now in presale stage II.

We’ve tracked down that the best crypto whales are putting resources into the Ekart Inu token. Generally speaking, we trust Ekart Inu is the best crypto-token of all Inu’s. As Ekart Inu began as an Inu token, numerous skeptics guarantee the symbolic won’t ever arrive at the statues of other crypto tokens.

Nonetheless, as the crypto market prepares for another bull run and Ekart Inu adds further use cases, all there are possibilities this token could get extraordinary returns for financial backers.

Thus, on the off chance that you’d prefer to put resources into Ekart Inu at the present time, we’d prescribe to purchase in Ekart Inu with the base minimum sum being just $50!

Why is EKart INU popular?

Ekart INU claims to be one-of-a-kind merchandise to the global market with minimal transaction fees and without any financial borders, intermediaries, or annoying bureaucratic routine.

They connect producers all over the globe and supply businesses with the necessary tools for the launching of one-of-a-kind merchandise to the global market with minimal transaction fees and without any financial borders, intermediaries, or annoying bureaucratic routine. We will bring producers together from all over the globe in order to create our own economical eco-system that will take e-commerce to a whole new level.

“Ekart INU will be a revolution in the retail and eCommerce industry, a platform where you can purchase and invest at the same time without any hassle.”

Ekart INU is the first on the planet that professed to consume 80% of the absolute tokens. This implies, from the remaining 20% stock; 2% COVID relief fund, 2% will be given for airdrops and web-based media challenges. 6% from the remaining will be represented in invoice rewards. Rest 10% is separated into 4 Phases.

They don’t uphold enormous investors as their model covers the deal through a strategic price hike. Their essential spotlight lies in curbing the ongoing model of unstable prices under trade exchange and getting rid of such investors who invest huge amounts and manipulate the price in the market.

To do this, they follow the way toward burning 80% tokens and deal with the remaining 20% in a manner to preclude the best price. They support the local area by introducing the token in various web-based business stages and in all exchange trades. They have professed that they are a Company that stands on the trust and faith of their customers.

They visioned to give the direct control of the market in the hands of customers and people who are the direct users.  We must say, they have been successful enough to achieve what they envisioned. Ekart INU since the day of its launch is being supported by the customers and end-users.