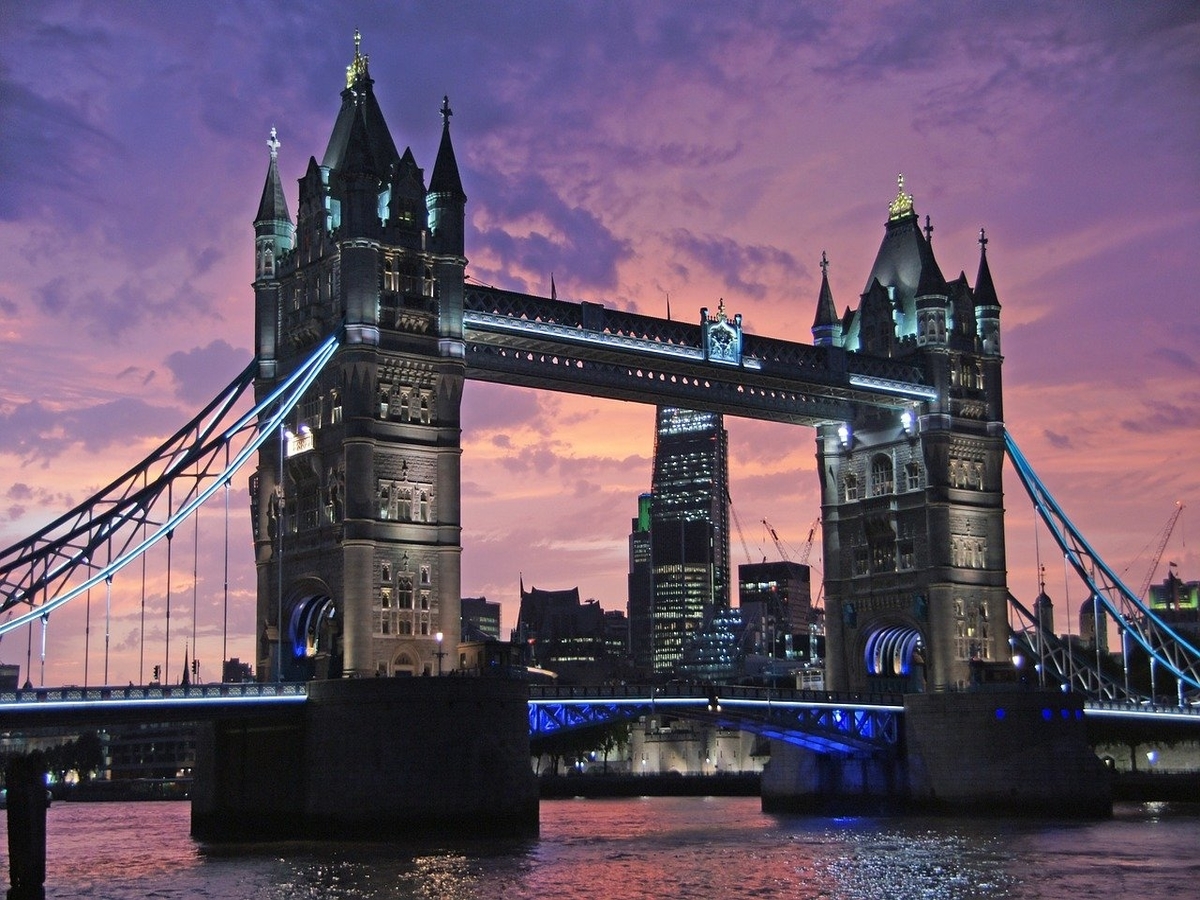 Ethereum’s much-anticipated London hard fork is just around the corner. The upgrade, a combination of several EIPs such as 1559, is expected to make transaction fees on the Ethereum network more predictable and less volatile. The adjustments made to ETH’s monetary policy will result in the alt becoming scarcer with time.

Here’s one question though – Can this upgrade make ETH’s price even more sensitive on a fundamental level?

Well, before answering the aforementioned question, let’s first take a deep dive and analyze how ETH responded to the upgrades that have already taken place on its network.

The very first upgrade on the Ethereum network, Tangerine Whistle, took place on 18 October 2016. ETH was valued at $12.5 at that time. The altcoin’s price did not react favorably for the first three months. In fact, ETH performed worse, when compared to Bitcoin, on the days that followed the upgrade. Its price only managed to break even after 120 days. 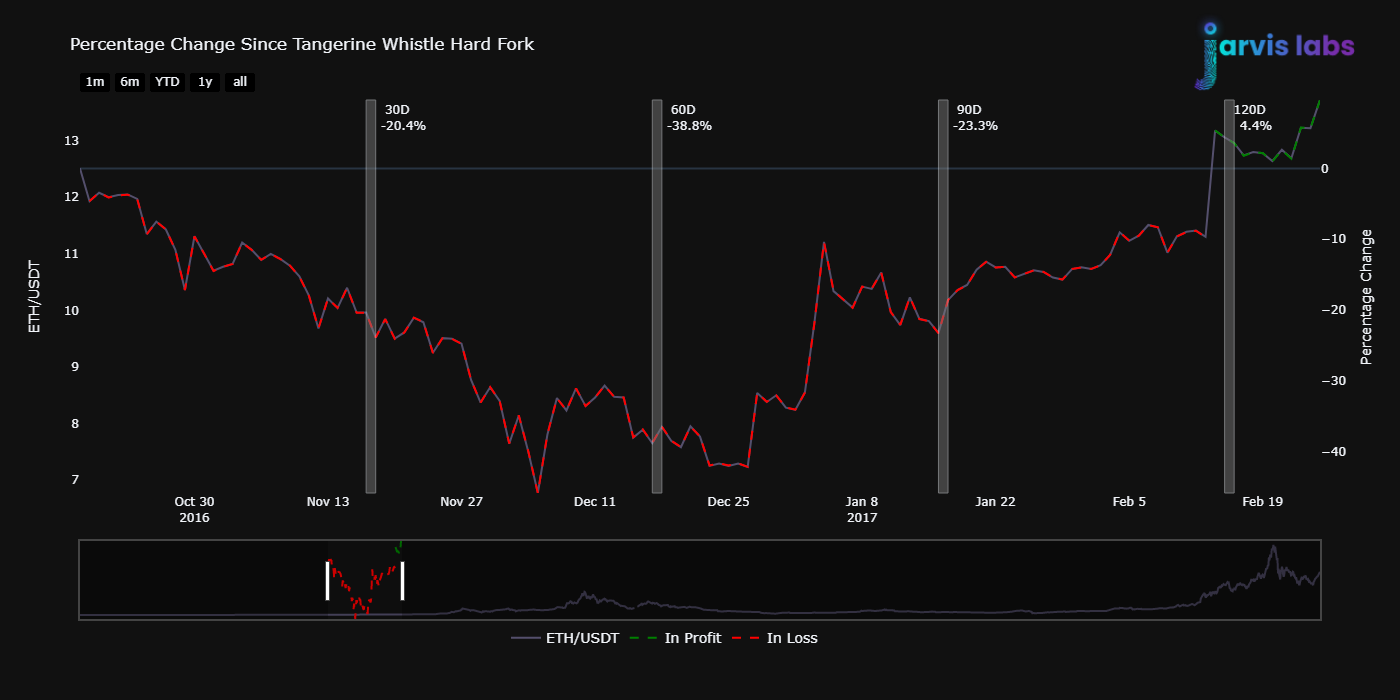 Ethereum’s second upgrade, yet again, took place in 2016 (23 November, to be precise). The alt’s value was around the $10 mark, at that time. ETH’s initial price reaction, post the upgrade, was not very appealing. However, its price started gaining momentum after 45 days, and behold, ETH began its rally post that. 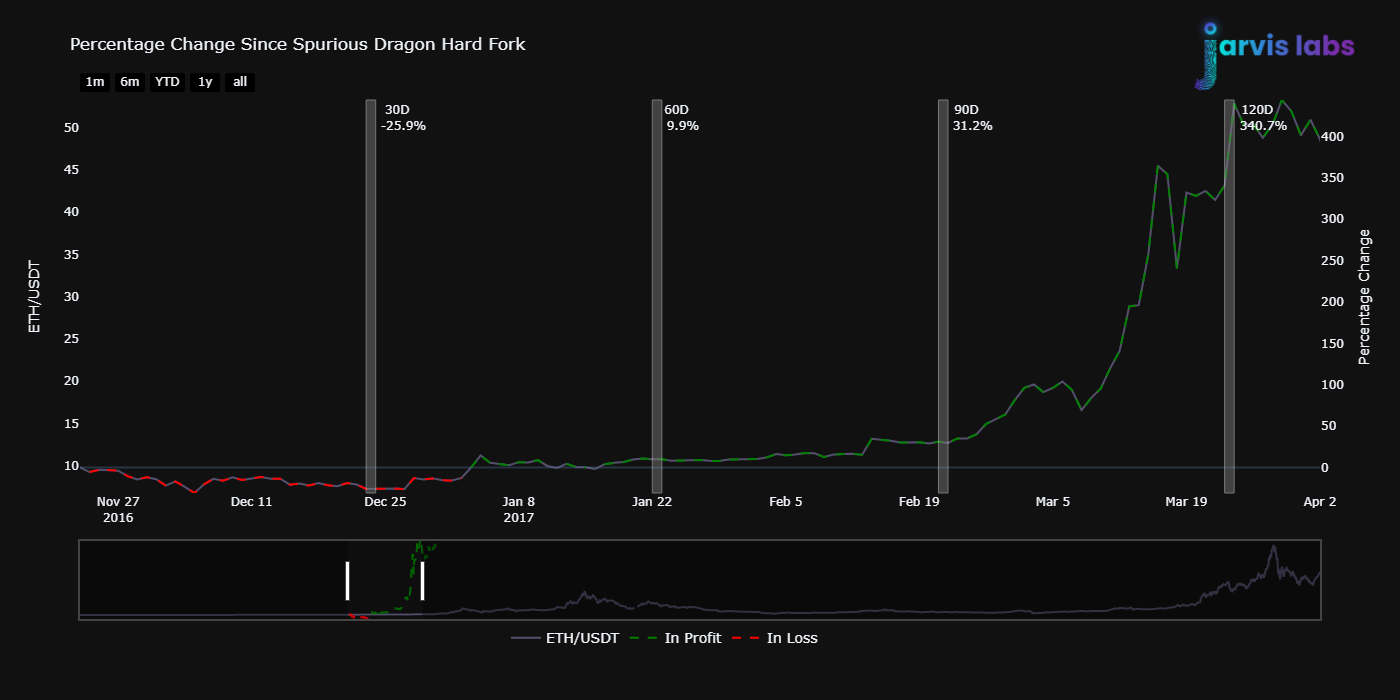 The third upgrade on Ethereum’s network, (Byzantium) happened on 16 October 2017. At that point in time, the altcoin was valued at $333. The initial 30 days were a bit rough, but the price managed to soar in the macro frame.

However, it should be noted that the entire market was growing at that stage. Hence, along with the upgrade, a favorable growth environment supported ETH’s price well. 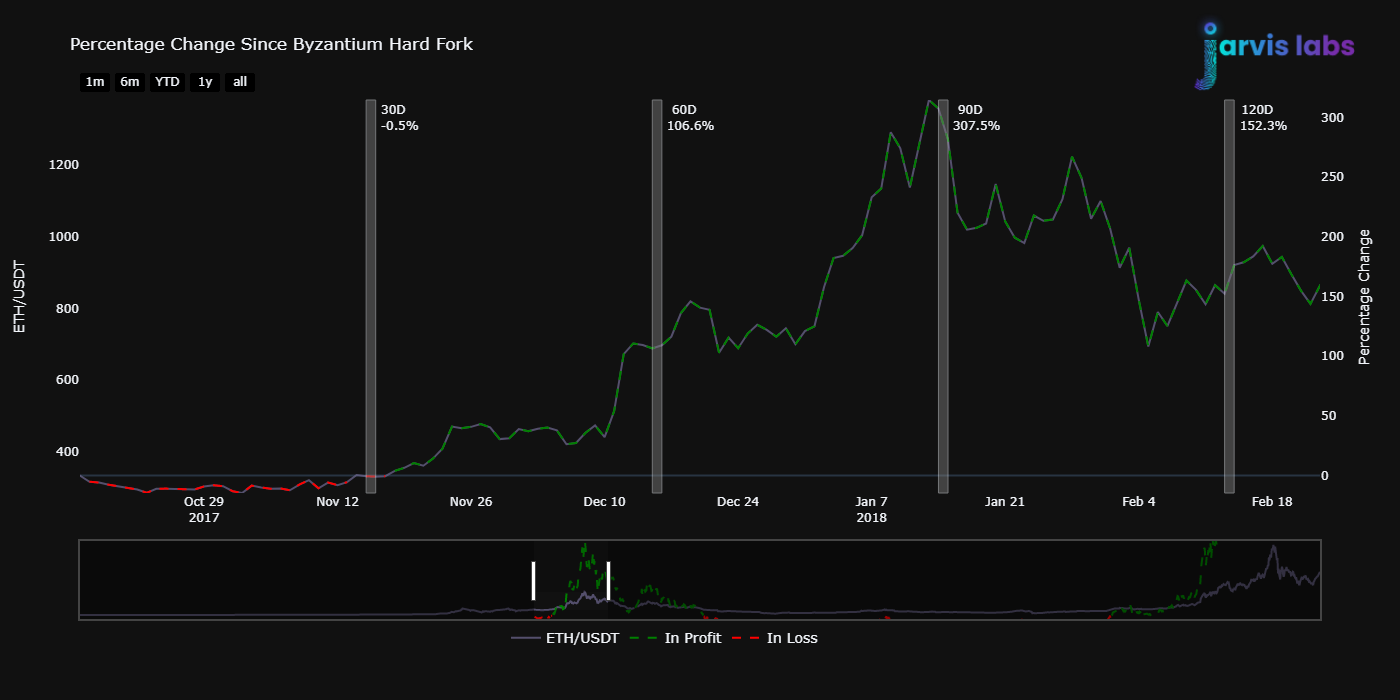 The year 2018 saw no major upgrade happen. The next upgrade, Constantinople, took place on 1 March 2019. At that time, ETH’s price had fallen to $136. This period coincided with 2019’s brief bull run. The entire market was performing considerably well. As can be seen, ETH’s price picked up momentum a couple of days after the upgrade and managed to soar over the subsequent weeks. 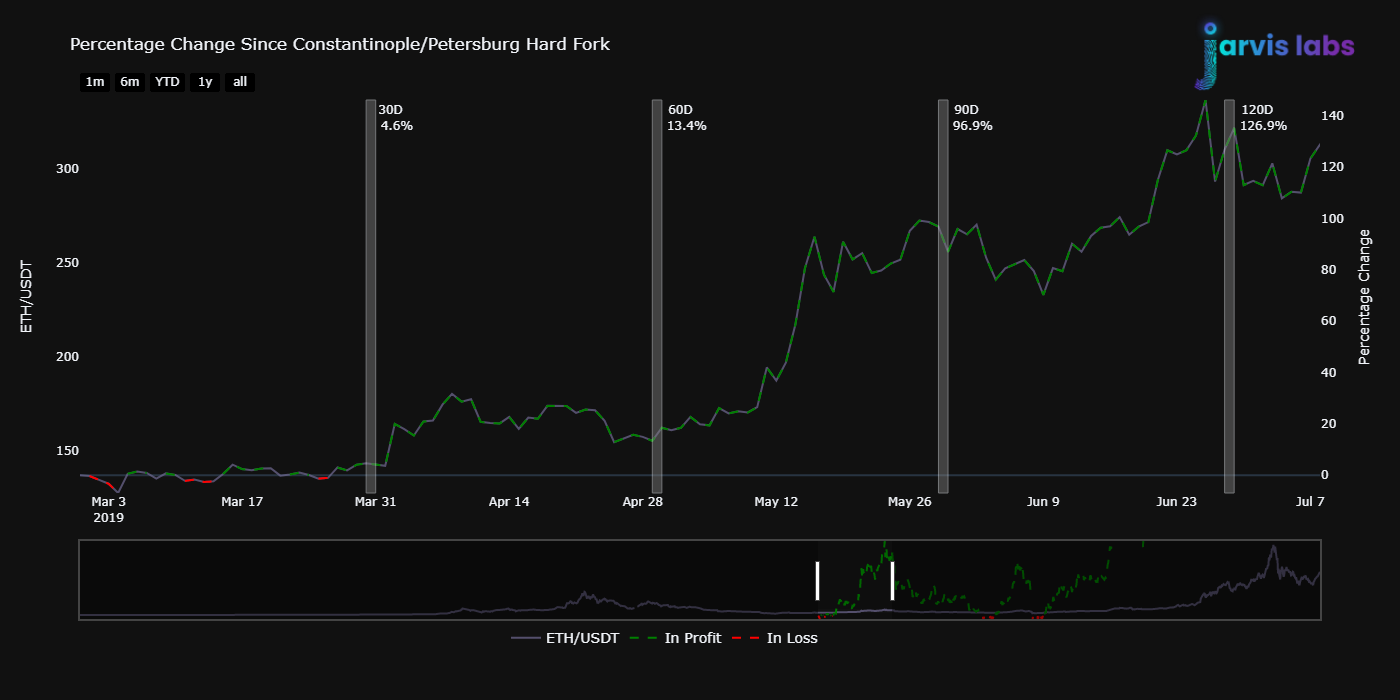 The fifth upgrade too happened in the year 2019 (8 December, to be specific). The alt’s price, at that stage, stood at merely $151. The first 30 days were pretty challenging, but in the subsequent two months, ETH’s valuation managed to cross the $280 level a couple of times.

Its price, however, succumbed in the 90-120 day frame, before gradually managing to pick up pace post that. 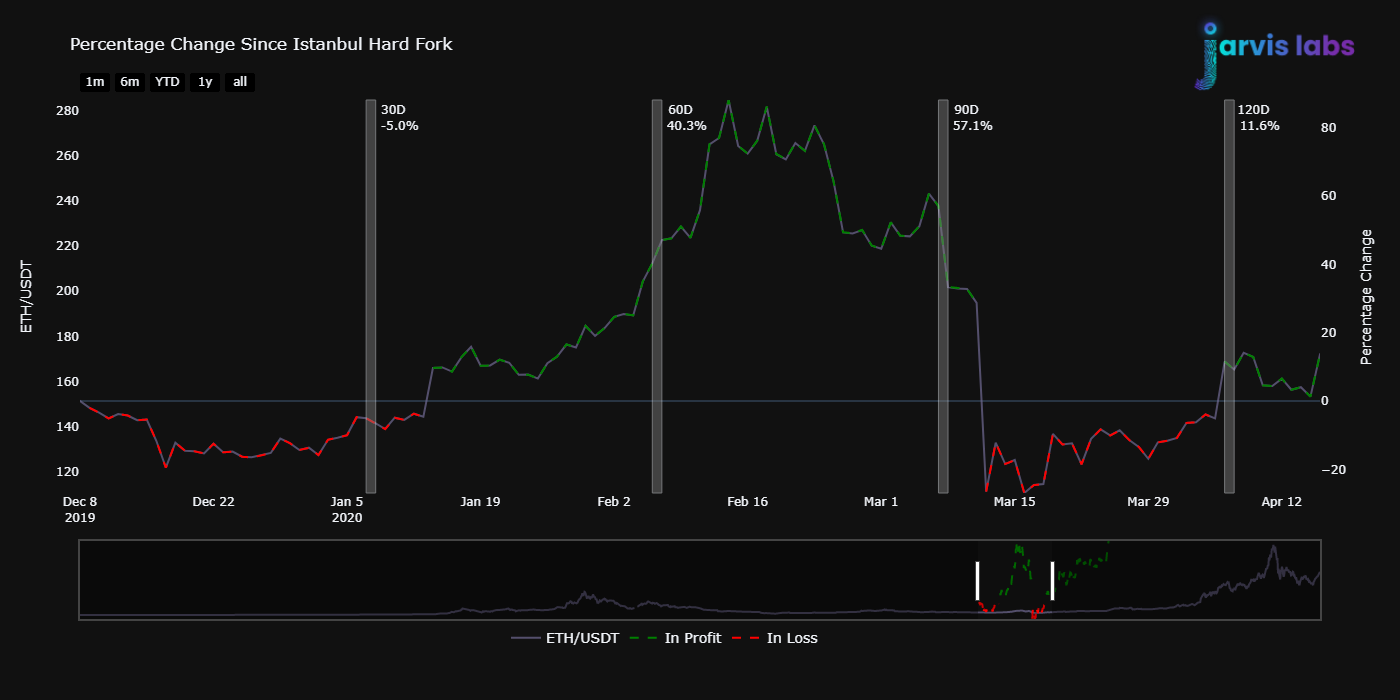 The Ethereum network saw its next upgrade on the first day of 2020. The crypto was valued at $130 at that time. As a matter of fact, the Istanbul and the Muir Glacier upgrades happened within a span of one month and, in conjunction, created a favorable environment for ETH’s price.

Interestingly, during the first 49 days of 2020, ETH gained by 59% over Bitcoin. A lot of ETH HODLers, post this upgrade, came to be in profit too. 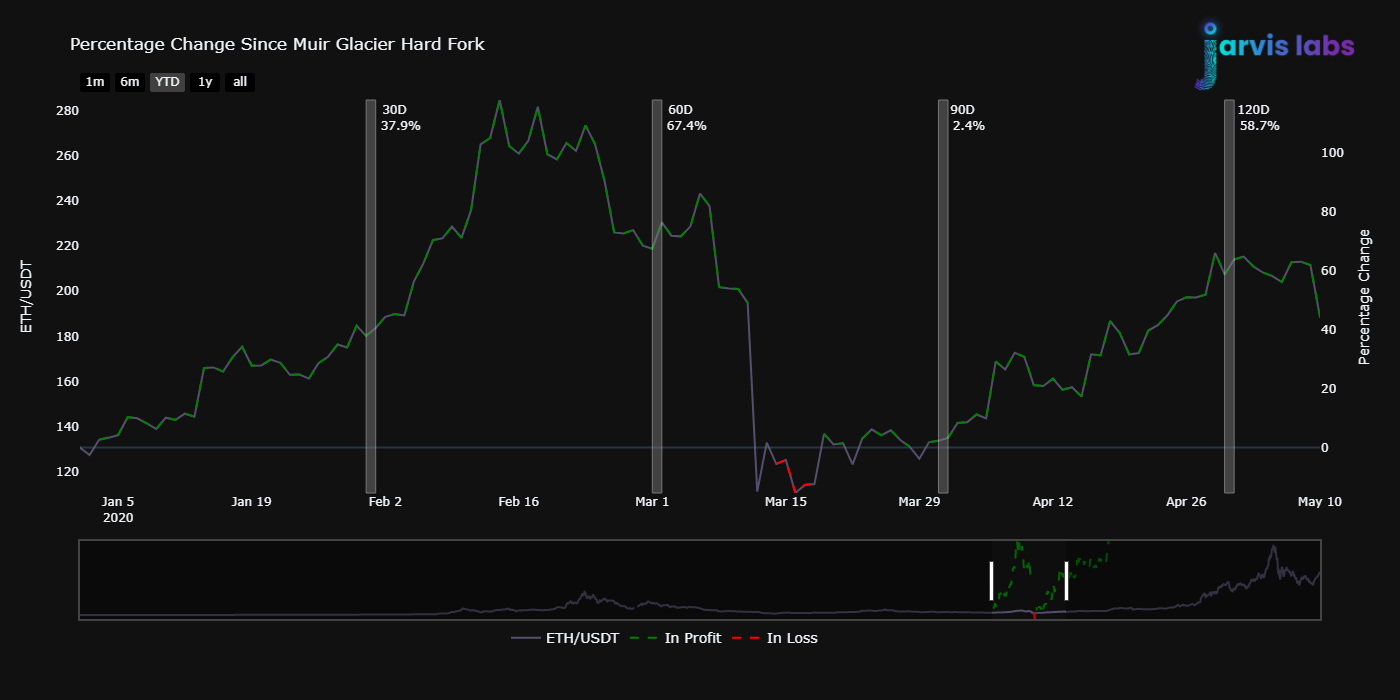 Ethereum’s Berlin upgrade happened on 15 April this year. At that time, ETH was trading at $2517. The initial few weeks were great for ETH. Its price, in fact, went on to secure new all-time highs of over $3k and $4k in quick succession.

Alas, like the rest of the market, Ethereum’s price gave way following the crash in mid-May. 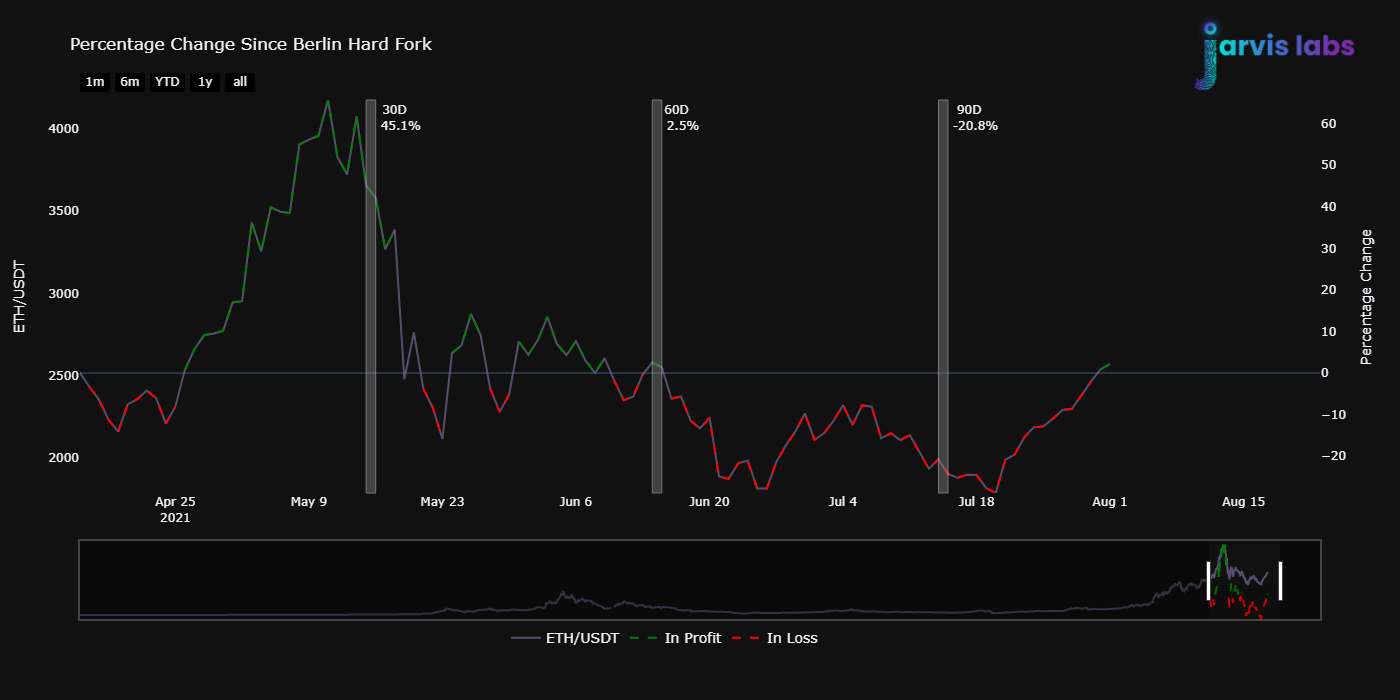 What to expect from the London upgrade?

The effect of the London upgrade on Ethereum’s price, at this stage, would largely be influenced by how the broader market performs in the days to come. ETH’s price has seldom reacted outrightly, especially during the initial days post any upgrade. The actual impact of the London upgrade would prominently be visible only in the long run.

Additionally, Ethereum has had a great week thus far. In fact, at press time, ETH had appreciated by 9.11% in 7 days. Looking at the current state of the market, it can be concluded that there is still room for a lot of growth.

Cardano: Alonzo, yes, but here’s what else is in Hoskinson’s plans