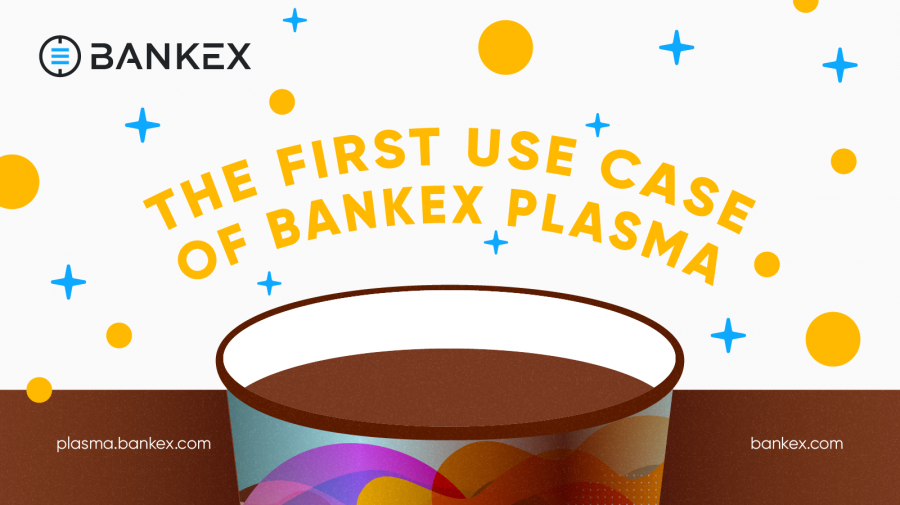 BANKEX Plasma unveils its first use case – buying coffee from a vending machine with crypto. This is the first realization of the Plasma blockchain, a solution originally proposed by Vitalik Buterin for the Ethereum main network.
In July, BANKEX Plasma reached a capacity of 22,000 simultaneous transactions per second. This real-life usage of Plasma hastens the era of using crypto for everyday purchases. BANKEX shared the following video showing the first working prototype of BANKEX Plasma.

Several years ago, when trendy shops and cafés started offering customers the option to pay with crypto, they encountered two problems trying to use cryptocurrencies in real life: transaction cost and transaction speed. BANKEX Plasma solves both, as proven by its first use case – buying coffee from a vending machine.

If this were treated as an ordinary Ethereum transaction, it would at the time of writing cost about $0.20 to process. It would also take about 2 minutes from the payment code scan to the delivery of the coffee. $0.20 is not much in the context of transfers of $100 or more.
And 2 minutes is trivial if you are enjoying your coffee in a café. But in the context of buying coffee, to go for less than $1 from a vending machine, these issues become more critical. BANKEX Plasma makes transactions instantaneous and drops the cost per transaction to $.005.
The key underpinning of BANKEX Plasma, the protocol powering this new way to make purchases with crypto, is a transparent off-chain infrastructure for payments, especially micro-payments. Plasma can be thought of as a prepaid wallet. Initially, some Ether is deposited into a Plasma wallet from another preferred wallet. Thus, the standard Ethereum transaction fee is paid only once.
In the context of quickly buying something cheap, the value of the Ether deposited into the Plasma wallet needs to be more than the price of one cup of coffee. A fully-loaded Plasma wallet allows users to take full advantage of cheap off-chain transfers.
Plasma itself is not a distributed blockchain. Instead, it is provided by a Plasma operator. Plasma transactions need to be created and signed locally by end-users using the same private keys as normal Ethereum transactions by only using the Plasma API instead of delivering signed transactions to the Ethereum Mainnet.
The protocol is currently replicated across three data centers and can verify client software for integration capability and provide instant liquidity to users. The high-speed protocol is fully operational but will undergo additional stress testing in beta.
In its first month of beta testing, BANKEX observed Plasma processing over 22,000 transactions per second without sharding, at a cost of less than $0.005 [half a cent] per transaction.
BANKEX Plasma is an implementation of the original Ethereum Plasma project, invented by Vitalik Buterin and Joseph Poon in August 2017. The development of BANKEX Plasma began in October 2017, when BANKEX developers introduced their own version of Ethereum Plasma at the ETHWaterloo hackathon.
Technically, BANKEX Plasma is a nested blockchain on the main Ethereum network.  Ethereum smart contracts protect it from potential misbehaviors by participants and help increase the number of Ethereum transactions per second.
In other words, BANKEX Plasma is a shift of trust. BANKEX Plasma users give a little bit more trust to one party — the Plasma operator. This allows the Plasma operator to produce blocks at a faster rate, process transactions faster, and perform some additional functions.
At the same time, users can observe all operations, and if they see that the operator is acting improperly or maliciously, they can challenge the operator to prove that it is performing its functions correctly. If the Plasma operator cannot prove that they are acting in good faith and executing the user’s commands, users can stop interacting with them, thus cutting their losses and leaving a mark on the operator’s reputation.
There are three Ethereum addresses at play when buying coffee from a vending machine: the buyers, the vending machine owners, and the Plasma contracts. To buy a coffee, the buyer transfers some Ethereum to the Plasma contract, and then the Plasma engine begins to mine the first block.
Then, the buyer scans the QR-code of the item he wants to buy — in this case, a cup of cappuccino for 0.0003 ETH. By scanning the QR-code, the buyer initiates a Plasma transaction transferring 0.0003 ETH from his Plasma address to the vending machine owner’s address. After the transaction is executed, it is signed by the buyer’s private key. The vending machine owner receives their 0.0003 ETH and the buyer gets his Cappuccino.
About BANKEX
BANKEX is a global top-50 fintech company developing the Proof-of-Asset Protocol to bring Banking-as-a-Service (BaaS) product modules and blockchain together to enable digitization, tokenization, and exchange of assets for the development of a tokenized global ecosystem.  Leading BANKEX technologies include the Proof-of-Asset Protocol for tokenization, Plasma Protocol, BANKEX Scan, BANKEX Smart Justice, BANKEX Trust Service, and the Solidity Floating Point Library.
For more information, click here.
Follow BANKEX on Facebook and Telegram.
For more information on this and other press release topics, contact:
BANKEX Head of PR Maria Zvyagintseva —  Email

ICO is not a way to raise funds. It’s a way to start your network: Daniel Zakrisson, CEO at Cofound.it